Accessibility links
Fun Facts: The Olympics Edition Knowledge-hound A.J. Jacobs has been sifting through the history of the Olympic Games and talks about some of the behind-the-scenes stories and quirky moments at Oympics past. 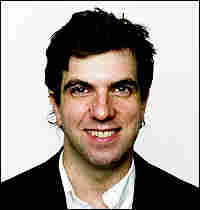 Self-proclaimed know-it-all A.J. Jacobs is editor at large at Esquire magazine and author of the best-selling books The Know-It-All and The Year of Living Biblically. Michael Cogliantry/Simon & Schuster hide caption

The ancient Olympic Games are said to date back to a footrace held in 776 B.C. The modern games were revived in 1896 and have their own storied history. A.J. Jacobs, columnist and writer for Mental Floss and Esquire, has been trying to uncover some of those historical stories.

But in light of the Beijing Olympics, he has turned his keen ear for trivia to the history of the games. He rattled off some of his favorite facts for host Scott Simon.

Legend has it that the length of the modern marathon was set by a messenger in ancient Greece who ran the race from the city of Marathon to Athens — only to collapse and die at the finish line.

Jacobs says the race might have less mythical origins. He believes the length of the modern marathon was actually set during the 1908 Olympics held in London — all for the viewing convenience of King Edward VII.

Edward apparently wanted a good view of the finish line, so the organizers decided to have the course begin at Windsor Castle and end at the Royal Box in London Stadium. The king got his wish, and the marathon got its permanent length.

A Greek farmer named Spyridon Louis won the first modern marathon at the 1896 Olympic Games in Athens. Louis' true achievement, Jacobs says, may be that he won despite the fact that — or maybe because — he stopped in the middle of the race for a glass of wine at his uncle's tavern. Evidently, alcohol was not a banned substance when the modern games began in 1896.

Social mores were a bit stricter during the ancient games in Greece, where athletes competed in the nude. Women, for example, were banned from participating in the ancient Olympics. But married women were banned from watching or even attending the games — and the penalty for any married woman caught sneaking a peek was execution.

During the 1976 games in Montreal, Jacobs says, a Soviet fencer named Boris Onishchenko was favored to win the gold medal. Onishchenko wasn't leaving his spot on the podium up to fate. He wired his weapon so that at the push of a button, it would register a hit even if he missed his opponent.

A spirit of camaraderie emerged during the track and field events at the 1936 Berlin Olympics. Two Japanese pole vaulters who had tied for second place simply refused to participate in a tie-breaker. Instead, Jacobs says, they cut their medals in half and fused them to one another so that each 'winner' ended up with a half-silver, half-bronze, medal.

It's almost unheard of for an athlete with a prosthetic limb to qualify for the Olympics, but American gymnast George Eyser was the first person to accomplish it. Eyser made the U.S. team and competed during the 1904 Summer Games in St. Louis, Mo., despite his wooden left leg — eventually winning the gold medals in the vault, parallel bars and rope climbing.

The Brazilian delegation to the 1932 Olympics in Los Angeles was broke. Brazil was in the midst of an economic crisis and the team was unable to pay the tax to enter the United States.

So the Brazilians came up with a novel solution — to put the athletes on a boat stocked with coffee and sell it on the way to Los Angeles. By the time they arrived, they hoped, they'd have made enough money to get to the games.

Sadly, the Brazilian delegation's caffeinated earnings were enough to purchase entry for only half of the athletes. Even sadder, the 24 athletes who competed — the water polo team — were disqualified from the games for beating up the referee.

The 1936 Summer Games in Nazi Germany also marked the debut of basketball as an Olympic sport. But organizers held the matches on dirt courts outside. When it began to rain during the championship game, the court turned into a mud bowl and none of the players were able to dribble. (The U.S. team beat Canada to take the gold medal.) The embarrassment, Jacobs says, caused at least one black eye for Adolf Hitler.