Accessibility links
Breaking The Silence Of A Secret POW Camp Almost by accident, the National Park Service stumbled upon a largely untold piece of U.S. history: Fort Hunt, a park in Virginia, had been a top-secret interrogation camp during World War II. The Park Service is trying to piece together the camp's past.

Listen
Breaking The Silence Of A Secret POW Camp

This is part one in a three-part series. 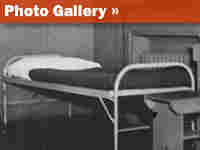 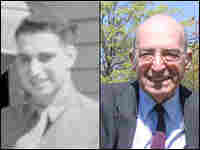 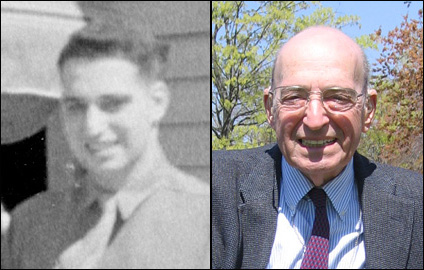 Pharmacology professor George Mandel, during World War II and as he is now. 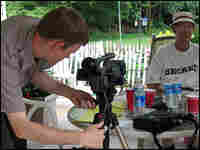 Brandon Bies of the National Park Service prepares to do an oral history with veteran Elvin Polesky, who was at Fort Hunt right after World War II ended. Pam Fessler/NPR hide caption 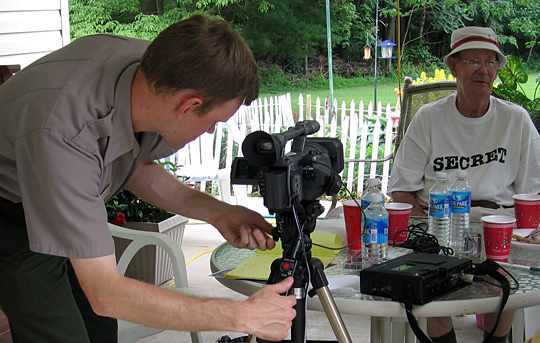 Brandon Bies of the National Park Service prepares to do an oral history with veteran Elvin Polesky, who was at Fort Hunt right after World War II ended.

About two years ago, National Park Service employees stumbled upon a fascinating and largely untold piece of American history.

It involves a secret World War II interrogation camp at Fort Hunt, Va., not far from the Pentagon. During and right after the war, thousands of top German prisoners were questioned there about troop movements and scientific advances.

Soldiers at the site also prepared special "care packages" for American POWs that they sent overseas. They included maps, radios and other escape tools.

Many of the camp's records were destroyed right after the war, and those who worked there were sworn to secrecy. Many veterans never spoke about it, even to family and friends, although the operation has been gradually declassified over the past two decades.

The National Park Service, which now runs Fort Hunt Park, has been trying to piece together the story of the interrogation facility — code-named P.O. Box 1142 during the war.

It all started when Brandon Bies, a park cultural resources specialist, was researching Fort Hunt for some historical signs for the park. He knew it had been the site of an intelligence operation during the war, but he'd been unable to learn much more.

A ranger giving a tour told a group of visitors that the Park Service's knowledge of the site's history was limited. Then one of the tourists raised her hand and said her next-door neighbor had been an interrogator at Fort Hunt.

That was the lead he needed. Bies learned the veteran's name, Fred Michel, and tracked him down at his home in Louisville, Ky.

"And the stories that Mr. Michel was sharing with us were unbelievable. Stories of secret submarines and nuclear devices and German rocket scientists that we absolutely had never heard of before," says Bies.

Michel also had documents, including some with the names of others who had worked at Fort Hunt, including his former colleague, George Mandel.

Mandel had become a pharmacology professor at George Washington University in Washington, D.C., right near Fort Hunt. The park service contacted him and then reunited him with Michel at the park in August 2006.

"They showed me around, and of course nothing was recognizable," recalls Mandel. "There's one house still available apparently from that time — and all the rest has been demolished."

Bies knew he was in a race against time if he wanted to preserve this history. Like Mandel and Michel, remaining veterans were likely to be in their 80s and 90s. So Bies and his colleagues began to interview and record as many Fort Hunt veterans as they could find.

They've contacted about 50 veterans who worked at P.O. Box 1142 and have interviewed more than 40 of them.

Polesky is a tall, friendly 83-year-old. He wears a white T-shirt with the word "SECRET" written across it in bold black letters — a souvenir from the National Park Service.

Bies hopes Polesky can fill an important gap in the story. The veteran was at Fort Hunt when the intelligence operation shut down in 1946.

Bies gently prods him for details as a videotape records the interview: "Do you remember about how many Americans were stationed at 1142 at that time?"

"Aw, gee, we didn't have all that many," says Polesky, as he tries to recall.

It's a fine line for Bies, trying to jog a veteran's memory without influencing it.

Polesky then says something that grabs Bies' attention.

"We had 250 German war prisoners underneath. They were down underground at Fort Hunt," he says.

Most veterans remember the prisoners being kept above ground. Bies doesn't really know whether some might have been kept underground. There are so few records.

He unrolls a large military map in the hopes that it will help Polesky recall more details.

Polesky peers at the map and points.

"Up on this far end was the two taller buildings, one of them being the one we billeted in," he says, going on to describe in detail what the fort looked like when he was there.

But then Polesky pauses. "Where's the underground part?"

"Well, that's what we were hoping you would tell us," says Bies.

It's a slow process, mining all these memories, but Bies say with each veteran, they learn a little more.

"We actually have from veterans a photograph of, on the day after the war ended, hundreds of documents being burned at 1142," he says. "And it illustrates how critical it is to speak to these gentlemen, because who knows what part of the story went up in smoke?"

He knows some of the history is gone forever. And the urgency only continues to grow. Four of the veterans he's interviewed so far have died.