Accessibility links
Amy MacDonald: A Self-Taught Scot At 20, the guitarist and songwriter from Glasgow has already sold 1 million copies of her debut album overseas. On the eve of the U.S. release of This Is the Life, MacDonald played a few songs and spoke with Scott Simon.

This Is The Life

Dancing In The Dark 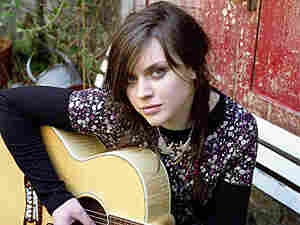 Amy MacDonald isn't very well known in the U.S., but that may be about to change.

She's a guitarist, singer and songwriter who's been playing gigs since she was 15 — she's all of 20 now. Her debut album, This Is the Life, has sold more than 1 million copies overseas. Not bad for someone who recently taught herself to play the guitar.

"You just have to have a song that you're desperate to play along to, and for me it was 'Turn' by the Scottish band Travis," MacDonald says. "I went to see them headline the Scottish T in the Park Festival, so after that festival, I went home and taught myself all of the Travis back catalog with an old guitar and a little chord book."

MacDonald recently toured the U.S. in advance of the American release of This Is the Life. She found the time to play a few songs and talk with Scott Simon about her American adventures — which she says she's enjoying immensely.

"I've been on loads of promotional trips in so many other countries, and most of the time, you just want to go home," she says. "But I absolutely love New York. Every time I go there, I still get excited. When you come over the bridge and you're coming towards Manhattan, I still get goose bumps every time."