Accessibility links
Shot-Putter Nelson Fails To Make Olympic Grade The men's shot put was a big disappointment for the U.S. Two-time Olympic silver medalist Adam Nelson threw with hurt ribs and didn't make it into the final eight. He fouled on all three of his attempts. 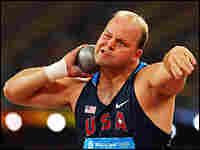 Adam Nelson of the U.S. competes in the men's shot put final at the Beijing Olympics on Friday. Stu Forster/Getty Images hide caption 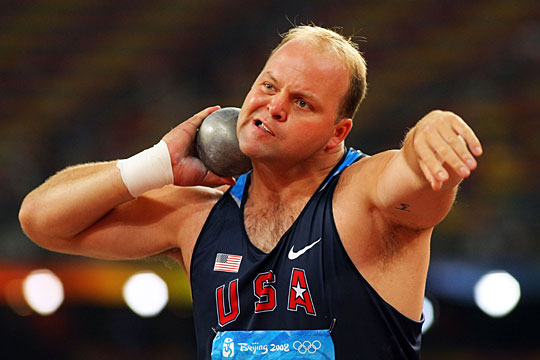 Adam Nelson of the U.S. competes in the men's shot put final at the Beijing Olympics on Friday.

NPR followed Nelson for several months as he aimed for Beijing and a chance to win a gold medal. He won silver in two previous Olympic games, but Nelson didn't get close in Friday's competition, which was also a disappointment for other American shot-putters.

On a beautiful, warm Beijing night, Nelson felt confident. Earlier in the day, he had the second farthest throw in the qualification round. But earlier in the week, he suffered a painful injury — a muscle pull that knocked a rib out of place. But it wasn't bothering him. He was ready.

After throwing a foul, Nelson stepped into the throwing circle for the second time and told himself to "see it" — the whirling move through the circle, the soaring steel ball.

The second shot landed long, but wide of the marked sideline. Nelson told himself it was no problem and that he was capable of a big throw. Earlier this year, he registered the longest throw in the world.

Only the top eight shot-putters move on for three final rounds and the rest are out.

Nelson, in the ring for his final attempt, threw the shot straight, but he stepped over the line.

And that was that. Nelson, the only American track and field athlete to win a medal at every major outdoor championship since 2000, crashed out of the biggest event, not even making the final round.

Nelson said he felt OK, and he said he certainly wasn't going to use his injury as an excuse. He was focused and confident, but it just didn't translate.

After the last foul, Nelson sat down and put on his white USA Track and Field baseball cap; he looked stunned.

"After the third foul," Nelson says, "I kinda said to myself, 'Well, I came out here and I really did the best that I could. And I'm not gonna let myself walk out of here with my head held low — I want to hold it high.'"

Performing At His Best

Nelson's goal heading into Friday's competition was to perform his best at the right moment. He felt he hadn't done that in Sydney or in Athens, even though he walked away with two silver medals.

While the result in Beijing might not show it, he said, he did the best he could — not that he was happy.

Also not happy was his American teammate Reese Hoffa, the reigning world champion, who finished seventh. Hoffa, Nelson and Christian Cantwell were called "The Big Three" heading into Beijing, but Cantwell, who took silver, was at a loss to explain Hoffa's and Nelson's performances.

"Sometimes it just doesn't go," Cantwell says. "I mean, the sport's brutal. Sometimes it's so easy, and sometimes it feels like that ball's 100 pounds."

Nelson is 33, and his wife is expecting their first baby next month. If Friday's s performance is the end of his career — which he hedged about after the competition — he said he would tell his child about the sacrifice that went into his experience.

"That I cared about something so deeply that I was willing to sacrifice a whole lot of time and effort to pursue that goal for 12 years," Nelson says. "I don't know if I'm gonna be able to do 16 [years], but I'll make that decision in a month or so."