Accessibility links
A More Tasteful Side To The Axis Of Evil When you hear Iran, Iraq and North Korea you probably think Axis of Evil, but to Chris Fair, this trio just screams dinner party. Fair, author of the book, Cuisines of the Axis of Evil, talks with Robert Smith about digestive diplomacy.

Listen
A More Tasteful Side To The Axis Of Evil

When you hear Iran, Iraq and North Korea you probably think Axis of Evil, but to Chris Fair, this trio just screams dinner party. Fair, author of the book, Cuisines of the Axis of Evil, talks with Robert Smith about digestive diplomacy.

When they write the book about the rhetorical achievements of George W. Bush, one turn of phrase deserves its own chapter. It was January 2002, and during the State of the Union, the president linked the countries of Iraq, Iran, and North Korea with this now-famous sentence.

President GEORGE W. BUSH: States like these, and their terrorist allies, constitute an axis of evil, arming to threaten the peace of the world.

SMITH: At Callahan's Diner in Santa Monica, California, a foreign policy analyst, Chris Fair, was eating pancakes and watching the speech. She'd traveled extensively around the regions that Mr. Bush was describing, and she just couldn't get over those words, axis of evil.

Ms. CHRIS FAIR (Foreign Policy Analyst; Author " Cuisines of the Axis of Evil"): I'm a professional analyst of South Asia. It was pretty clear to me that the Taliban, al-Qaeda had nothing to do with any of those three countries named.

SMITH: Chris Fair thought this could be a recipe for international disaster. Then she just started to think about the recipe part.

Ms. FAIR: I'm a food-obsessed person. I think about food all the time. Also, I cook when I get depressed.

SMITH: If President Bush could link Iraq, Iran and North Korea, then so would she. What emerged was a cookbook, "Cuisines of the Axis of Evil: A Dinner Party Approach to International Relations." The book is half foreign policy and half menu planning, kind of a Martha Stewart meets Henry Kissinger thing. You learn that Asian pear is the secret to a great North Korean bulgogi, and you can digest that along with a list of the human rights offenses of Kim Jong-il. The history of Saddam Hussein's quest for weapons of mass destruction is just as spicy as the okra and lamb stew. Bam!

Ms. FAIR: In the course of my travels, I've become really acclimatized to the politics of food, be it the really simple things like how the food is produced and who does it, and who gets to eat it, whether or not the country has food at all. So I think using the cookbook and using food to really express my various degrees of analytical and personal frustration came very natural to me.

SMITH: All this talk of terrorism and oppressive regimes can make someone hungry. Luckily, Chris Fair invited us to one of her axis of evil dinner parties here in Washington, D.C. While Fair was writing the book, she would invite friends and diplomats over to test out the recipes and debate international politics. On this night, the buffet was Iranian.

Ms. FAIR: We have a dish that's supposed to be khoresht, which is traditionally made of celery. And Iranians have a particularly unique ingredient that they use in dishes like that. It's basically a dried lime. It gives it this really fine sour/bitter taste. It's very distinctive.

SMITH: At the party, you could see the crazy logic of digestive diplomacy. It's much more difficult to start a war with Iran after tasting their version of the dessert baclava. One of the guests at the party was won over. Sarah Taylor works for the National Zoo.

Ms. SARAH TAYLOR (Employee, National Zoo): Well, if it is evil, it's the best-tasting evil I've ever tasted. It tastes like honey and cinnamon and pistachios, and it's delicious.

SMITH: That's why Chris Fair says at its heart, this cookbook isn't just a joke.

Ms. FAIR: One of the interesting symbols of nationalism is food. We often don't think about it. But think about the efforts, for example, in New Orleans, to resurrect their cuisine after Hurricane Katrina. Think about how much France goes about protecting, you know, something as simple as a French baguette.

SMITH: You're a foreign policy analyst, and I'm going to trust you on some of these brainy issues. But what about the food? I mean, how do I know that the stuff actually tastes good? You know, you talk a good game on foreign policy, but let's talk cuisines. How did you learn how to do this?

Ms. FAIR: Well, again, you know, I'm a nut about food. And part of it is just triangulation. I'll go to a country, I'll eat something. I'll try to find a recipe either online, or I'll try to talk to someone about how they make it, or certainly from a cookbook. And I'm pretty shameless, you know. I'll just go, hey, waiter, you know, I'm trying to make this particular chupli(ph) kebab, and I can't get it quite right. What's your secret? And you know, they're actually very forthcoming, often whispering, you know, where their managers aren't paying attention.

SMITH: Sounds a lot like our intelligence agencies in the United States.

Ms. FAIR: I like to think of myself as a culinary spook.

SMITH: Chris Fair is a foreign policy analyst and a former political affairs officer for the United Nations. She's the author of "Cuisines of the Axis of Evil" published by The Lyons Press. Thanks for coming in.

Ms. FAIR: No, thank you for having me.

SMITH: To read more of Chris Fair's musings on international relations, visit us on the Web at npr.org.

Excerpt: 'Cuisines of the Axis of Evil and Other Irritating States' 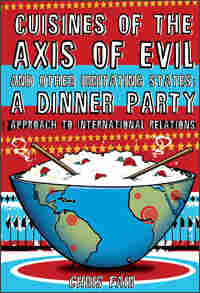 Chew on That Thought

While most folks recognize the power of food to bring people together, I notice most its power to divide. Many religions enshrine various forms of commensalisms, or rules that govern with whom you can eat and with whom you cannot. In Hinduism, high-caste persons can't eat in the presence of those who are low caste, whose very shadow defiles the former. Many religions specify not only the animals that can be eaten but the ways in which those animals must be killed as a precondition for eating them and the means by which they must be prepared. This can seriously limit the number of people one can eat with.

Cuisines also yield some insights into the social structure of countries in question. Indian food is time-intensive and requires either a platoon of servants or a daughter-in-law. Women can spend hours of their day slicing and dicing up tiny vegetables, slaving over an open gas burner with little or no ventilation, and, in some cases, cooking up their family victuals over a fire made of desiccated cow dung! And as housewives everywhere hang up their apron for a computer or a real estate license, food slopped to their families changes accordingly. Yet despite the obvious centrality of women in food production and preparation, in many parts of the world, men and women are socially barred from eating together. More disturbing, while women do all the heavy lifting and cooking of those meals, in some places those same women are resigned to eat whatever scraps their men-folk have left for them.

In other words, eating structures power and social relations in ways that most of us have internalized without much thought. Because food is important to me and because my pre-marriage dating list resembled the roll call of the U.N. General Assembly, I've had to abandon relationships with men who were Jewish, Muslim, or Hindu simply because of their eating rules. I eat pork, drink booze, and think vegetarian cuisine is best left for ruminates. I found their eating issues to be bigger hindrances than their various religious commitments, because food—in its preparation and in its consumption—is one of the most fundamental things that we as humans share, and these rules critically create groups who can be included or alternatively excluded in this most primal act.

Food also encapsulates differences in social mores between and within cultures. For example, Americans flinch at those Chinese, Vietnamese, and Koreans who eat dog and cat—man's best and passable friends, respectively. Some Hindus in India are disgusted that we love eating our cows, with whom they share their own spiritual affections. While Americans think of their beloved horses as being akin to big dogs, folks in Central Asia love their horses too—formed into spicy sausages and gracing a fatty pullov. My Chinese colleagues and friends have pointed out how wasteful Americans are when we only eat part of the animal and discard the rest. They are correct to ask, why is a beef steak delicious but a brazed ox penis is repugnant?

Similarly, folks in many Muslim countries are obsessed with various animal parts with alleged properties conferring sexual prowess upon its consumers. For instance, in several places in the Muslim world, it is a delicacy to eat the "egg of lamb," which, as you may have guessed, is the poor animal's family jewels. As you stroll through the meat bazaars of the Muslim world, you are greeted by elegant piles of elaborately arranged organ meat, kept glistening by the efforts of the shopkeepers who sprinkle them with water dotingly. Often they are decorated with garlands of chili peppers, sliced tomatoes, and red onions. Pakistanis love their brain curry and their spicy stew of goat head and feet. The latter, sir paya, is particularly disconcerting, with at least one whole goat head staring up at you blankly from the pot. I flee from this dish when I see it, but I have to ask myself why I find these offerings to be vile while I am perfectly happy eating other parts of that same goat in curries or as kebabs. Similarly, why do most Americans find the Asian culinary custom of eating cockroaches disgusting when most of us eat shrimp and lobster, which are little more than the cockroaches of the sea? Clearly these value judgments of what is or is not edible reflect cultural values that we rarely consider—until we are confronted with one of these affronting delicacies.

Only the foolish would underestimate the social and political importance of food when, in fact, every aspect of what we put into our mouths is burdened with social, political, religious, and even militarized baggage even though most of us remain woefully unaware of the same. It seems to me that cuisine is a perfectly defensible lens through which to look at the countries examined herein and U.S. policies toward the same, and I hope you will agree.

Excerpted from "Cuisines of the Axis of Evil and Other Irritating States" by Chris Fair, copyright @2008. Reprinted with permission of the Lyons Press. All rights reserved.