Accessibility links
McCain, Obama Drawn Out On Abortion, Marriage Mega-church pastor Rick Warren hosted presidential candidates John McCain and Barack Obama at his Saddleback Church in Orange County, Calif., Saturday. They took the stage one at a time to answer questions about values from Warren and his congregation.

Mega-church pastor Rick Warren hosted presidential candidates John McCain and Barack Obama at his Saddleback Church in Orange County, Calif., Saturday. They took the stage one at a time to answer questions about values from Warren and his congregation.

In Southern California, a rare sight last night: Barack Obama and John McCain briefly together on the same stage. They were interviewed by Pastor Rick Warren at the Saddleback Church in Orange County, and the questions he asked were more personal than political. NPR's Ina Jaffe reports.

INA JAFFE: Barack Obama won a coin toss and chose to go first. He's been working hard to reach out to evangelicals, a group that voted overwhelmingly for President Bush. So he eagerly submitted to Rick Warren's questions, some of which were the kind that most people wouldn't want to answer at all, much less in public.

JAFFE: On his personal failures, Obama talked about his troubled youth and his experimentation with drugs and alcohol. And then he showed that he knew how to play to the house.

Senator BARACK OBAMA (Democratic Presidential Presumptive Nominee, Illinois): I think the process for me of growing up was to recognize that it's not about me. It's about...

JAFFE: Of course, Warren said he liked it. It echoed the first line of his book, "The Purpose Driven Life," which is, "It's not about you." And when Obama discussed America's moral failings, he did it by quoting Scripture.

Senator OBAMA: We still don't abide by that basic precept in Matthew, that whatever you do for the least of my brothers, you do for me. That notion of...

JAFFE: There was only so far Obama could go, however, in convincing the Saddleback congregation that his public policies were biblically based. On the subject of abortion, for example...

Senator OBAMA: I am pro-choice. I believe in Roe versus Wade. And I come to that conclusion not because I'm pro-abortion but because ultimately, I don't think women make these decisions casually.

JAFFE: That wasn't the right answer for most in this audience. But if there's an evangelical church where Obama could get a good reception, Saddleback would be it. Rick Warren has been in the forefront of urging evangelical Christians to expand their agenda from abortion and gay marriage to include poverty, climate change and HIV/AIDS, and Obama got a lot of applause. But when Warren put the litmus test question to his opponent, McCain got cheers.

Pastor WARREN: What point is a baby entitled to human rights?

JAFFE: Answers like this could reassure evangelicals, some of whom have doubted McCain's commitment to their issues. He was asked the exact same questions as Obama, though McCain got some extra ones because some of his answers, like this one, were so short.

Senator MCCAIN: A union between man and woman, between one man and one woman. That's my definition of marriage.

JAFFE: McCain's answers were more overtly political than Obama's. When Obama was asked to name the wisest people he knew, he included his wife and his grandmother. None of McCain's choices were personal. One of them was General David Petraeus, and that gave McCain the opportunity to promote his commitment to the war in Iraq by lauding the general who, quote, "took us from defeat to victory there." McCain's answers were blunt and efficient and just what Saddleback member Jeff Avis(ph) was looking for.

Mr. JEFF AVIS (Saddleback Member): He didn't even have to think of a lot of the answers to his questions. They were to the point and well-formed.

Ms. DONNA THOMONSON (Saddleback Member): The support for the everyday person and the compassion for people who are struggling, and that just continues to resonate with me.

JAFFE: Just about everyone we spoke with agreed on one thing: that they got to know the candidates in ways that they felt aren't possible in the usual televised debates. That's left Mike Briga(ph) in a quandary.

Mr. MIKE BRIGA (Saddleback Member): The two candidates, I felt, were as different as they could be, but I think either of them will make fantastic presidents. Obama, I felt, showed compassion, and McCain showed decisiveness.

JAFFE: And, said Briga, we need both in our next president. Ina Jaffe, NPR News, Lake Forest, California. 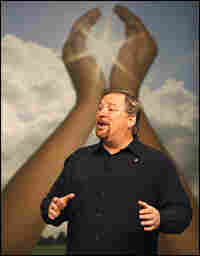 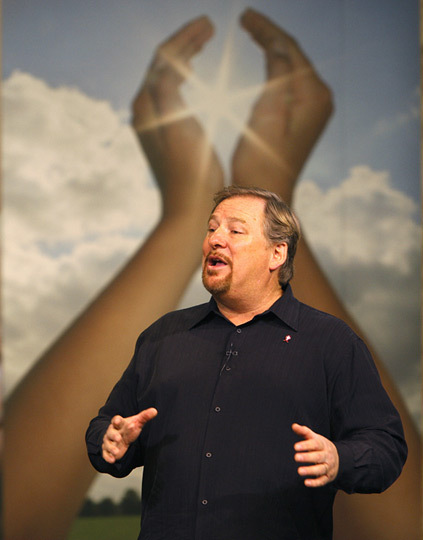 Pastor Rick Warren speaks at a summit on AIDS held last fall at his Saddleback Church in Lake Forest, Calif. Warren will host a forum at the church Saturday with presidential candidates John McCain and Barack Obama.

Democrat Barack Obama and Republican John McCain will make their first joint appearance as their parties' presumptive presidential nominees on Saturday. But it won't take place at a town hall meeting or during a televised debate.

Instead, the two candidates will take turns speaking at the Saddleback Church in Orange County, Calif. — home to 22,000 evangelical voters and their pastor, Rick Warren, author of the best-selling book The Purpose Driven Life. Warren has not endorsed either candidate.

Warren has said that the conversations will focus on issues such as poverty, AIDS, climate change and human rights. The forum also gives the politicians the chance to appeal to religious voters. The most recent poll from the Pew Forum on Religion & Public Life shows that white evangelicals are more undecided now than they were at this point during the last two election cycles.

John Green, a senior fellow at Pew, talked to NPR about what to expect from the upcoming forum.

What does it mean that the candidates' first joint appearance is at Saddleback Church?

Beyond what it may say about the role of religion and the campaign, the event seems to serve the purposes of both the Obama and McCain campaigns. As you know, there has been a lot of back-and-forth between the campaigns about joint appearances. This is the first one that's happened. It could also be that some of the people who put this together, including Rick Warren himself, were a particular draw.

Why would Warren be a draw? How was he able to persuade the candidates to appear at his church?

One of the reasons Warren has the kind of attraction to Obama and McCain is that he is not as political as some pastors are. He cares very much about issues like AIDS in Africa. The better parallel is between him and [Billy] Graham. Graham was friends with many presidents and close to the Bush family. Graham did this in a very bipartisan way but always managed to stay above the rough and tumble, because he always talked about issues, and he based his appeal on personal relationships.

What types of issues could the candidates talk about in front of this evangelical audience?

There are a number of issues that evangelicals are likely to respond to quite positively. They are very interested in candidates talking about their faith, and how they understand their personal relationship to God and how that fits into their political platform. Sen. Obama has done a lot of that already. But Sen. McCain really hasn't, so I think a lot of attention may be focused on how he addresses those issues when they come up.

Rick Warren has said he will try to focus the discussion on AIDS in Africa, the environment and poverty. There has been a broadening of the evangelical agenda over the last four years. It's not that evangelical have abandoned the social issues; it's just that they now care about more things.

But the old agenda items haven't gone away. Evangelicals may be interested in hearing where the candidates stand on same-sex marriage and abortion. Rick Warren, in some of his public statements, has said that he doesn't really want to focus on those issues, but it will be interesting to see if the candidates address them anyway in that context.

How have the candidates, up to this point, dealt with religion? And how could it surface on Saturday?

Obama spoke very regularly and openly about his faith and about how it relates to his political values. His campaign has also been organized to reach out to religious voters. Although Barack Obama is very different from George W. Bush, there is a certain similarity between the Obama campaign this time and the Bush campaign in 2004. The approach to religious voters is central to both campaigns.

Sen. McCain has approached it a different way. He seems less comfortable talking about it, and this has not been as prominent in his speeches and in public appearances. There is reason to believe that his campaign is also reaching out to religious voters, but in a less public way. In that sense, the McCain campaign resembles Sen. John Kerry's campaign back in 2004. Sen. Kerry, at least at that point, was also somewhat uncomfortable talking about his faith.

So, it's interesting. There is a little bit of a role reversal [in terms of religion] in the major parties.