Accessibility links
Atlantic City Tries To Widen Its Appeal To Tourists Officials in Atlantic City like to boast that the New Jersey vacation spot is within a day's drive for a third of the U.S. population. But that fact isn't translating into booming business this summer. From souvenir stands on the boardwalk to the casinos and hotels, high gas prices and the soft economy are taking a toll.

Listen
Atlantic City Tries To Widen Its Appeal To Tourists

Officials in Atlantic City like to boast that the New Jersey vacation spot is within a day's drive for a third of the U.S. population. But that fact isn't translating into booming business this summer. From souvenir stands on the boardwalk to the casinos and hotels, high gas prices and the soft economy are taking a toll.

Given the high price of gas, many people are choosing to vacation close to home this summer. And while you'd think that'd be good news for a tourist destination like Atlantic City, which is a short drive from New York, Philadelphia, Washington, D.C., Atlantic City is having a rough year. Brad Linder reports.

BRAD LINDER: Tourism is the third largest industry in New Jersey. And a third of all tourist dollars spent in the state are spent in Atlantic City. The number of cars on the Atlantic City expressway over the July Fourth weekend was up 14 percent this year, but the number of dollars spent at casinos in June was down 11 percent from last year.

Mr. JEFFREY VASSER (Director, Atlantic City Convention Center and Visitors Authority): I, you know, refer to it as the three-headed monster. So you've got the, you know, gaming and slot, you've got the down economy, and you've got gas prices.

LINDER: Jeff Vasser is director of the Atlantic City Convention Center and Visitors Authority. He says people have less money to spend on leisure, and many people in the region are spending it closer to home. Pennsylvania and Connecticut are both expanding legalized gambling, which gives people one less reason to hop in a car and make a daytrip to Atlantic City.

Mr. VASSER: Because if somebody simply wants to pull a lever on a slot machine, they're not going to have to go very far from home. We need to give people a compelling reason to come to Atlantic City.

LINDER: One casino that's trying to do that is the Borgata. This summer, the company launched something new: a luxury hotel called the Water Club, which has no casino at all. Instead, it has fine dining, retail, entertainment and a spa, amenities you won't find at a slots parlor in Pennsylvania.

Mr. LARRY MULLIN (President, Borgata and Water Club): The one great thing about where we're located is, you know, we have a quarter of the population of the United States sitting within a tank of gas from here.

LINDER: Larry Mullin is president of the Borgata and Water Club.

Mr. MULLIN: We have just not done as a good a job in this Atlantic City marketplace of getting people that have been not coming to this market at all.

LINDER: Mullin says business has been strong since the resort opened in June.

LINDER: Out on the Atlantic City boardwalk, you can still find plenty of tourists like Joanne Iberra(ph) and Lorenzo Anderson(ph), who drove three hours from the Bronx to get here.

Mr. LORENZO ANDERSON (Tourist, Atlantic City): It's nice out here. People are going to come no matter what, whether the economy's good or the economy's bad. People have got to get out and enjoy life. I mean, life is short. If you don't enjoy it now, you won't be able to enjoy it when you're gone, that's for sure.

LINDER: But small businessmen like Jim McClain(ph) tell a different story. McClain runs a souvenir shop on the boardwalk. He says while casino revenue is down about 11 percent from last year, he's doing half the business he did in 2007.

Are you going to be OK this year?

LINDER: But if you had a couple more years like this, what would that mean?

LINDER: McClain's already laid off four employees this year. He's manning the store by himself now, but he says it's been easy because there are fewer customers.

Not every industry's been affected the same way by the economic downturn. One surprising beneficiary: the airlines that fly planes over the shore with banners advertising local and national businesses. Barbara Tomalino is president of Paramount Air Service in New Jersey. In a good economy, she says her company does well.

Ms. BARBARA TOMALINO (President, Paramount Air Service): In an economy that's perhaps less than stellar, we do very well. People are trying to, I guess, be more creative with their advertising dollars. I don't know if they're using -you know, they're spending more, but they're certainly using it more creatively.

LINDER: While Paramount Air is spending nearly a $1.50 a gallon more on fuel than it did last year, she says demand has been up so much that the company could actually come out ahead.

Mr. BRUCE SPRINGSTEEN (Singer): (Singing) Put your makeup on, fix your hair up pretty and meet me tonight in Atlantic City.

Well, I got a job and tried to put my money away, but I got debts that no honest man can pay. So I drew out what I had from the Central Trust and I bought us two tickets on that Coast City bus.

What's Taking a Bite Out of Atlantic City Casinos?

What's Taking a Bite Out of Atlantic City Casinos?

This is the first in a two-part report. 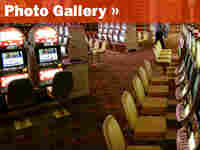 There's an old line among gamblers: The only way to make money in a casino is to own it.

In Atlantic City, N.J., the line is still true, but perhaps not quite as true as it once was. That's because casinos have seen profits fall as competitors from neighboring states have elbowed their way onto the gambling table.

Last year, for the first time ever, revenues declined. Sure, the casinos took in almost $5 billion dollars — but the year before it was more than $5 billion.

In the past, Atlantic City casinos' revenue increased every year. Casino operators could congratulate themselves on figuring out the market: Throw limo rides and Mel Torme tickets at the big spenders and round out their own fortunes by busing in little old ladies eager to slide their quarters into slot machines.

It's a gross stereotype, but things used to be that simple. But when revenues took a dip, the old way of doing things stopped seeming reliable and started seeming antiquated.

Michael Pollack is a long-time casino consultant and editor of the Gaming Industry Observer newsletter.

"You gotta understand that, for most of its existence, Atlantic City largely had a monopoly on East Coast casinos. In that earlier era, you did not have to work particularly hard to operate at close to capacity. The customers were there because they really couldn't go anywhere else," Pollack says.

But now they can — and do. Two huge Indian casinos in Connecticut opened a decade ago. Casinos at racetracks in Pennsylvania and Delaware also are cutting into Atlantic City's profits. A casino in downtown Philadelphia should soon be under construction. There's also a new slots-only parlor in Yonkers, N.Y.

Dawn Canella, from Wallington, N.J., plays the slots and has been going to Yonkers because it's closer than Atlantic City. And, Canella says, Atlantic City casinos have been taking slots players for granted.

Canella is the type of gambler who has been written off by the city's leading casinos. The Borgata has gone after more youthful, upscale visitors who were once, in the parlance of Borgata's internal marketing department, "Atlantic City rejecters."

Michael Facenda, the Borgata's director of marketing services, says that when his casino was built in 2003, the city's general mindset was "if it ain't broken, don't fix it. ... When we came in, we just knew there could be more."

Today, the Borgata is Atlantic City's most profitable casino and an exception to the rule of declining revenue.

On Borgata's gaming floor, the roulette wheel spins true. Over at the craps table, a hard eight still pays 9-to-1, just like everywhere else. By law, the games can't change. But everything else at the Borgata stands out.

Unlike the older Atlantic City properties, there are no stains on the carpet and the "Borgata Babes" are similarly unblemished. These cocktail waitresses must sign an agreement stipulating they'll stay within a few pounds of their weight when hired.

"I know for a fact that we're hurting Atlantic City because a lot of their high rollers are coming here and they love it here because they're minutes away," Alameda says.

Empire City is a slots-only "racino," the newest trend in casinos. It combines racetrack betting and a casino.

Racinos are proving to be a burr in the saddle of Atlantic City while at the same time promising salvation for the horse-racing industry.