Accessibility links
Leroy Sievers: A Farewell In His Own Words Commentator Leroy Sievers died over the weekend at his home outside Washington, D.C. He was 53. As a television journalist, he covered wars in Iraq, Central America, Somalia and Kosovo. After he was diagnosed with cancer, he began writing his daily blog, "My Cancer," on NPR.org. Through selections of past commentaries, Sievers says goodbye in his own words.

Listen
Leroy Sievers: A Farewell In His Own Words

Commentator Leroy Sievers died over the weekend at his home outside Washington, D.C. He was 53. As a television journalist, he covered wars in Iraq, Central America, Somalia and Kosovo. After he was diagnosed with cancer, Sievers began writing his daily blog, "My Cancer," at NPR.org. Through selections of past commentaries, Sievers says goodbye in his own words. 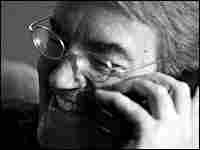 Leroy Sievers blogged about his illness on his blog, My Cancer. Courtesy of Discovery hide caption 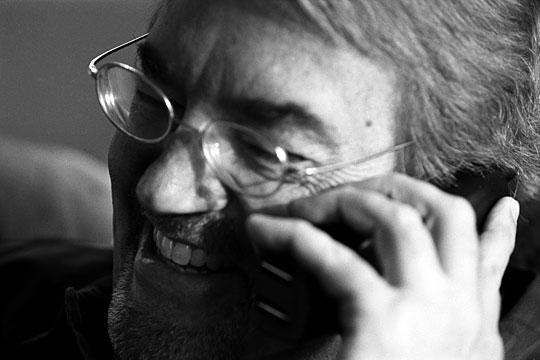 Leroy Sievers blogged about his illness on his blog, My Cancer. 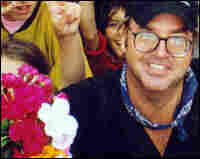 Leroy Sievers traveled the world as a journalist. Here he is surrounded by Albanians. Courtesy of ABC News hide caption 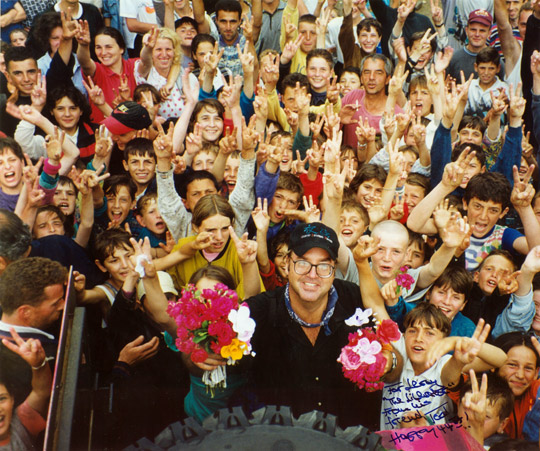 Leroy Sievers traveled the world as a journalist. Here he is surrounded by Albanians. 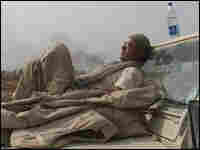 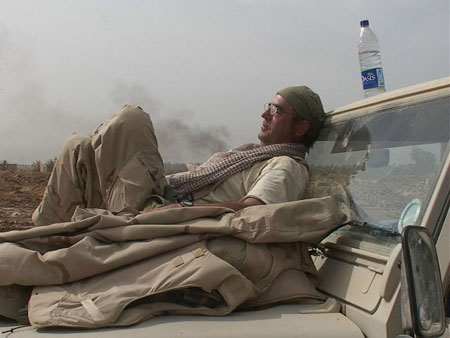 Sievers: In His Own Words

'This Is My Life'

Journalist Leroy Sievers, who covered wars, genocides and natural disasters in more than a dozen countries — and who chronicled life after his cancer diagnosis for NPR on-air and online — died Friday. He was 53.

For 14 years, Sievers worked at ABC News' Nightline, spending his last four years with the program as its executive producer.

Earlier, he worked for nearly 10 years at CBS News. A graduate of the University of California at Berkeley, he began his career at KTVU-TV in Oakland, Calif.

In more than 25 years as a working journalist, Sievers covered conflicts in Iraq, Rwanda, Somalia, Kosovo, El Salvador and Nicaragua, among other countries.

During the 2003 invasion of Iraq, he was embedded with the 3rd Infantry Division alongside Nightline anchor Ted Koppel. And it was Sievers who was responsible for "The Fallen," Nightline's 2004 tribute to those who died in the ongoing Iraq war.

After leaving Nightline, Sievers became a guest lecturer at the University of Southern California's Annenberg School for Communication, and he returned to Africa for Human Rights Watch and the International Crisis Group.

For the Discovery Channel, again working with Koppel, he produced Our Children's Children's War, a special report on the long-term implications of the war on terrorism.

A Diagnosis, And A Decision

Sievers was first treated for colon cancer in 2001. Four years later, the cancer returned, this time in his brain and lung. Doctors told him he probably had less than six months to live.

Instead, for 2 1/2 years, he was able to treat the cancer with surgery, chemotherapy and radiation.

As he began chemotherapy treatments, Sievers detailed his experiences on NPR's Morning Edition, in a commentary that aired Feb. 16, 2006.

Ellen McDonnell, NPR's morning-programming director, recalls listening to that first commentary, and she remembers how the rawness and transparency of Sievers' words struck a chord with listeners — those battling cancer, and others as well.

Several months after the first commentary came a second, and then a regular series chronicling Sievers' life in what he called "Cancer World."

Eventually, under the title "My Cancer," the project would become a multimedia conversation that included a daily blog, a weekly podcast and — most important to Sievers — a community.

"Leroy gave voice to a topic that we are very uncomfortable with — death and dying," McDonnell said. "My Cancer had a face and a heart and a smile."

In his radio essays, in his podcast commentaries and on the blog, Sievers addressed the polite silences that surround cancer. He described his early internal debates about whether it was worth it to buy new pants and shoes. He spoke frankly about his hope that he would live long enough to read the final installment in the Harry Potter series.

(He did, reporting avidly on the 759-page volume in a blog post written late at night, immediately after he finished the book.)

In the summer of 2008, a week before his 53rd birthday, Sievers learned that the cancer he had kept at bay for so long had "exploded" throughout his body. His doctors told him that they had run out of treatment options.

Courage To Face Horrors, And An Appetite For Small Joys

A towering man at 6 foot 5, Sievers once wrote that he wasn't "particularly graceful." Yet there was a grace in the frankness with which he observed the world.

In 1994, in the final days of the Rwandan genocide, Sievers traveled with a Nightline crew to the sprawling, cholera-plagued refugee camps on Rwanda's border.

There were no roads, no paths — just tens of thousands of people, barely living and already dead, lying "head to toe in a lava field," as Sievers wrote in an article for the Los Angeles Times Magazine. As he and his crew picked their way through, he felt a movement at his feet.

"I looked down and saw a small boy," Sievers wrote. "He looked to be about 5, which meant he was probably 10. Malnutrition will do that."

"He was lying on his back and had thrown his arm up over his head. His fingers had gotten tangled in my boot laces. As I looked in his eyes, I saw the light go out. And he died. A stranger's face, my face, was the last thing he saw. And all I could do was shake my foot to free my laces from his fingers, and then move on to catch up to my team. It was five years before I could tell that story."

Like many who have become intimately familiar with death, Sievers learned how to appreciate the fleeting pleasures of life.

At his home in the Washington, D.C., suburbs, he hosted an annual Halloween party, where one year he greeted guests dressed as another tall Washingtonian: Janet Reno.

He indulged his cravings. He liked to drink an entire gallon of ice-cold skim milk each day. He loved jalapeno peppers and iced mochas. In one blog post, "Little Things That Turn the Day Around," he posed a revealing rhetorical question: "What isn't better with melted cheese on it?"

Richard L. Harris, NPR's afternoon-programming director and another Nightline veteran, remembers Sievers as a man with a deep baritone laugh and a sense of humor that helped him navigate life's most challenging moments — a man who approached his work with courage and a disarming honesty.

"While his craft was to illustrate television stories with the right picture, his gift was using words to touch people," Harris said. "He did everything with passion."

As Nightline's executive producer, Harris recalled, Sievers "would eloquently tell the subscribers to the daily Nightline e-mail why the broadcast on that particular night mattered."

With its tens of thousands of subscribers, that daily e-mail was in some ways a blog before blogs became a fixture on the Web. Sievers wrote in a conversational tone, often revealing how each night's broadcast came together. At one point in late 2000, the subscriber list was growing by 1,800 per week.

Why Blog? Because 'No One Walks This Road Alone'

In May 2007, Ted Koppel hosted a three-hour, prime-time Discovery Channel documentary, Living with Cancer, in which he interviewed his friend and longtime colleague. In interviews before the documentary aired, many reporters asked Sievers variations on one basic question: "What do you get out of writing the blog?"

He concluded one My Cancer post with an answer: "A daily reminder that none of us walks this road alone. What could be better than that?"

Sievers blogged about his cancer almost every day. Even on days that he could "forget" about the disease, he argued, it was important that he share his reflections for the many readers who didn't have such a momentary reprieve.

In an interview on NPR, Elizabeth Edwards, the lawyer wife of former Sen. John Edwards and herself a cancer patient, described what she called Sievers' gift.

"[It's] not just that he gives people an opportunity to open up — and they do, so many of them do on his blog — but that he is the voice for people," Edwards said. "That sometimes they feel they don't need to speak; that he's speaking the words that they're feeling."

And as the blog became a virtual meeting place, with readers responding to Sievers and to each others' stories, it grew into a community.

Mary, a mother of three facing the "daily reminders" of baldness and a chemotherapy port, said she made a morning ritual of reading the blog over a strong cup of coffee.

Another reader, Connie, wrote that the blog helped her understand the experiences of her 46-year-old brother, who had the same type of cancer Sievers did.

Lawyer and syndicated columnist Susan Estrich read Sievers' blog religiously and once wrote that he left her "between laughter and tears" — not with a profound thought, or a moving description of fortitude, but with his wrath about the thinly padded, "ridiculously uncomfortable" hospital tables to which patients get strapped for everything from radiation to MRIs.

Andy Carvin, NPR's senior social-media strategist, defines a "truly great blog" as a place where a community forms, and where members find themselves almost compelled to join the conversation. Carvin, himself the son of two cancer survivors, found himself reading Sievers' blog almost every day.

"NPR and Leroy launched My Cancer, but it's evolved into Our Cancer," Carvin said. "It's a place where patients, cancer survivors and their friends and families can have a safe and trusted place where they get support and gain strength from each other."

In addition to the close-knit My Cancer community, Sievers is survived by his wife, television producer Laurie Singer. He lost his 83-year-old mother, June Sievers, in March — to the same type of cancer he himself had developed.

On her passing, Sievers wrote a post he titled "Cancer Takes Another Life." He remembered his mother's love of spicy food, and of driving on the open road.

He ended that post with words as transparent and simple as the ones that began the My Cancer journey: "I will miss her."