Accessibility links
Exactly How Legal Is Medical Marijuana? California's medical marijuana law conflicts with federal law, which says the growth and sale of the drug is illegal. But taxing marijuana could provide hundreds of millions of dollars in revenue for state and federal governments.

Exactly How Legal Is Medical Marijuana?

At Oaksterdam University, students learn how to cultivate and sell medical marijuana the "safe way." A day in an intro class shows that this may require the paranoid mentality of a drug dealer. Find out how easy it is to get rich off weed. 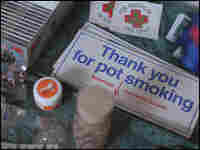 Dispensary owner Don says he wants his patients to be informed advocates for medical marijuana until the day "federal law is harmonized with state law." Jolie Myers/NPR hide caption 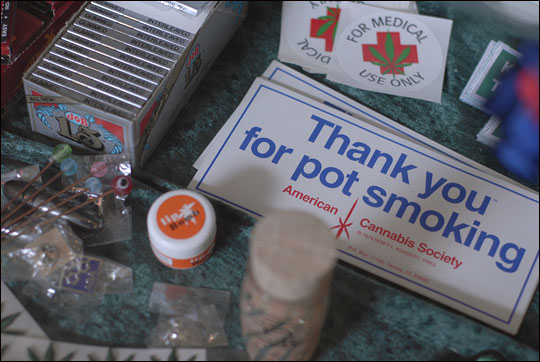 Dispensary owner Don says he wants his patients to be informed advocates for medical marijuana until the day "federal law is harmonized with state law."

In Los Angeles, billboards displaying gigantic pot leaves are fairly common roadside attractions. There are an estimated 200 medical marijuana facilities operating in Southern California. With a doctor's "recommendation," a patient can walk into any one of these and buy pot — legally.

But, California's medical marijuana law conflicts with federal law, which says the cultivation and sale of the drug is illegal. California already makes over $100 million a year from taxes paid by medical marijuana facilities. Marijuana advocates claim legalizing and taxing medical marijuana could provide hundreds of millions of dollars more for the U.S. government.

We take a journey through the dreams and realities of the industry as part of Day to Day's California Dreaming series. Comment here. 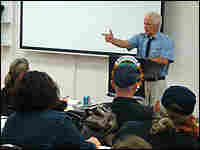 Marijuana activist and Oaksterdam University instructor Dennis Peron illustrates how a police officer once held a gun to his chest. He says the solution to overcrowded prisons is to have inmates cultivate and smoke marijuana. Heather Murphy/NPR hide caption 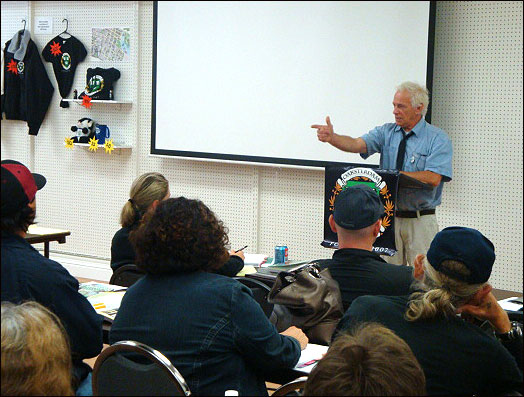 Marijuana activist and Oaksterdam University instructor Dennis Peron illustrates how a police officer once held a gun to his chest. He says the solution to overcrowded prisons is to have inmates cultivate and smoke marijuana. 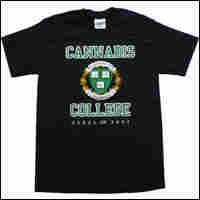 On every block of downtown Oakland, one is likely to encounter someone in an Oaksterdam University t-shirt. hide caption 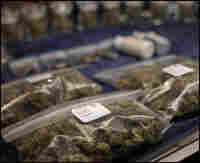 If marijuana were to be rescheduled along the lines of a Codeine or Tylenol, the price would drop dramatically. For this reason, many growers are content with it's sort of legal status in California. Jolie Myers/NPR hide caption 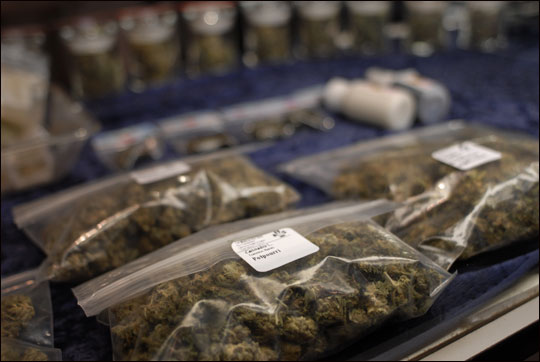 If marijuana were to be rescheduled along the lines of a Codeine or Tylenol, the price would drop dramatically. For this reason, many growers are content with it's sort of legal status in California.

In some parts of Hollywood, it seems there are more marijuana dispensaries per square mile than Starbucks. With the price of your average blunt far surpassing a Frappucino – and no federal tax on weed income — one could see how the seed of a get-rich-quick scheme could plant itself in a passer-by's head.

Oaksterdam University, the United States' only marijuana trade school, is the place where these pipe dreams are cultivated — and imploded.

Univeristy President Richard Lee often begins classes by warning, "People who think they can make a quick buck and get out of paying taxes, they go to jail."

At Oaksterdam, students learn how to cultivate, sell and use medical marijuana the "safe way." Because these activities are legal under California state law but illegal under federal law, the safe way essentially means learning to swim through a big gray swamp.

Not Your 'Average Stoner'

Located in downtown Oakland, Calif., in the heart of the medical marijuana district, Oaksterdam's main campus is really just a massive classroom with a small "grow lab" attached. The university also runs Blue Sky Coffee Shop, one of four marijuana dispensaries in the city; another coffee shop where one can legally smoke, but not buy, weed; a "gift shop"; and a sort of marijuana DMV, where one can get an official medical marijuana ID card. There's also a smaller satellite campus in Los Angeles.

Since the university was founded a little over a year ago, the weekend workshops ($250) as well as the semester class ($400) have all sold out, according to Ilia Gvozdenovic, Oaksterdam's chancellor. Lately, to meet demand, the school has been adding more advanced cannabis business and dispensary-management classes, he says.

At the end, students take a test and get a certificate.

"It shows that one is more interested in and serious about medical marijuana than your average stoner," Gvozdenovic says. That can be helpful for getting jobs in the industry.

Indeed, on a recent Saturday, the freshman class doesn't fit the half-baked slacker image painted by some initial reports about the school. The 60 or so students range in age from 20s to 70s. There's a handful of wild-haired, slow-talking hippie types, but overall the crowd defies generalization. During a break, an elegant 50-something blonde swaps growing tips with a tattooed Fabio look-alike. A trendy Asian college student chats about legal minutiae with a punk chick wearing alien earrings. Many of the professors wear suits.

While no one denies they are looking forward to the cooking class, it doesn't seem to be the focus.

"You have to know this stuff," says 21-year-old Andrew Macdonald of Sacramento, between sips of green juice. "I simply wanted to educate myself."

In March, his friend and medical marijuana doctor, Marion Mollie Fry was sentenced to five years in federal prison for conspiring to grow and distribute marijuana. The case was unusual, because, with just 100 plants, Fry's operation was relatively small compared to others that the feds have targeted.

"They set her up," Macdonald insists.

Indeed, local law enforcement officials had told Fry it was OK to grow a small garden, a fact that was inadmissible in federal court, along with other references to the state-defined concept of "medical marijuana."

Throughout the day, a variety of marijuana experts take the stage, breaking down the history, legal hurdles and growing techniques, while offering both inspiring and cautionary tales.

Ultimately, the lesson seems to be that to successfully navigate the medical marijuana world, one must think like a lawyer while taking the precautions of a drug dealer.

"You control the facts that could end up in court," criminal defense lawyer Omar Figueroa tells the class.

Facts that wouldn't be problematic for a doctor who prescribes a federally recognized medication such as Prozac, for example, could be problematic for "medical marijuana." Call the cops in Berkeley or Humboldt to report stolen medical marijuana and they may help you get it back, explains Figueroa. Call the cops in a more conservative county, and a police officer may take out a search warrant on your home.

Though state law generally protects medical marijuana in the home and in the dispensary, it doesn't really account for transportation. Some cultivators choose to transport marijuana via bus or bicycle for this reason. Oaksterdam recently started a bike cab service around Oakland.

**Don't hire a felon to work in your dispensary, because the feds may pressure him or her to become a snitch.

**Though an armed guard may be a tempting way to ward off robberies, a firearm turns marijuana sales into a more serious crime under federal law.

**Keep marijuana far out of reach of children.

Valerie of San Cruz, who did not want to give her last name because her family is still dealing with legal issues, backs Figueroa up on this one during the break. When she got pregnant, she let her recommendation expire. Her son was arrested for an unrelated reason. The cops found a photo of a marijuana plant on his phone, got a search warrant for her home, found her medical marijuana stash, charged her with contributing to the delinquency of a minor and threatened to take away all of her kids.

Thanks to a good lawyer, the charge was eventually dropped. Undeterred, she's got a fresh recommendation and plans to grow her own medical marijuana plants.

After lunch, it's time for the legendary Dennis Peron. Introduced as "the father of the medical marijuana movement," Peron once ran for California governor on a "mandatory marijuana platform" — as a Republican — and co-authored Prop 215, known as the Compassionate Use Act of 1996.

Before the term "medical marijuana" even existed in the 1990s, Peron was running a huge medical marijuana club for AIDS and cancer patients. He's been to jail on marijuana charges dozens of times. Each time left him more passionate about his work, he says.

"In one year year, I had $51 million running through my hands. I never touched it," he says.

Like many in the medical marijuana community, his dream has little to do with money. "Marijuana will be legal in my lifetime. ... I feel hopeful that Obama will reschedule marijuana," he says, referring to the fact that marijuana is currently a Schedule I drug under federal law, the most tightly restricted category.

Indeed, Democratic presidential candidate Barack Obama has said that he favors decriminalizing, though not legalizing, marijuana. The details of his plan are hazy, but Peron insists that reclassifying medical marijuana to a lower "schedule," along the lines of Codeine and Tylenol, is going to happen in the next year. (His fellow professors are far less convinced.)

Ironically, most growers don't want to see marijuana rescheduled, Peron confesses after class. Prices would plummet, meaning that as the dream of truly legal weed would become reality, the promise of marijuana riches would go up in smoke.