Accessibility links
Paella Perfect: Rediscover True Flavors Of Spain Paella prepared on a kettle grill and served with a glass of cool sangria made for a magical party for food writer Bonny Wolf. But first she gathered a few tips on the proper equipment and ingredients for this traditional Spanish meal.

Kitchen Window is on vacation and will return next week. This article originally appeared on Aug. 17, 2005. 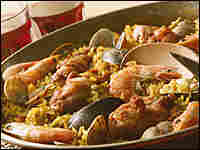 Vegetables, seafood, chicken and sausage are common ingredients in paella. But cookbook author Penelope Casas says the best paellas focus on either meat, fish or veggies — and don't mix them all together. iStockphoto.com hide caption 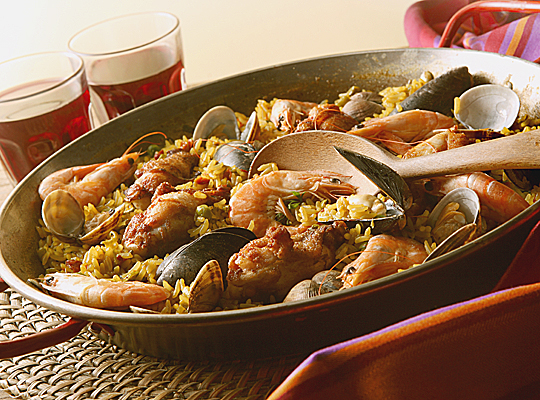 Vegetables, seafood, chicken and sausage are common ingredients in paella. But cookbook author Penelope Casas says the best paellas focus on either meat, fish or veggies — and don't mix them all together.

Get recipes for Mixed Seafood Paella and Sangria.

In Spain, you can find a dish called paella turista that loosely translates as "strictly for tourists."

It approximates the kind of paella most Americans know — a mixture of ingredients from land and sea served over rice that is often overcooked and sometimes artificially colored.

"I have little enthusiasm for the paellas I have eaten outside of Spain," writes Penelope Casas in her book Paella! Spectacular Rice Dishes from Spain. "The horrors that have befallen this exquisite dish and the indignities it has suffered!"

I made paella years ago and loved it but, apparently, did just about everything wrong. So when I decided to make real Spanish paella for a Sunday summer dinner, I had to be re-educated. I will never go back.

Paella was born in Valencia, a rice-producing area on Spain's eastern coastline. Early paellas were cooked outdoors over wood-burning fires for farm workers. They were made with rabbit, snails and beans, and traditionally were eaten straight from the pan.

In Spain today, families and friends still gather outdoors to cook paella either over an open fire or using a specially designed paella grill. It's an image I wanted to re-create in my urban backyard. Even with a Weber kettle as our centerpiece, I must say, it looked like a photograph out of Gourmet.

The pan used to make paella — a paellera — gave the dish its name, and the modest investment in authenticity pays off in taste. The pan is shallow, wide and round with slightly sloping sides. This shape ensures that the rice cooks evenly in one layer. Paelleras are available at cookware shops or through catalogs. Paella experts like the thin carbon steel pans that heat fast and don't retain too much heat. You can substitute a stainless steel or aluminum skillet, but cast-iron and nonstick pans are discouraged.

Fully equipped, I turned to the ingredients. Real paella, I learned, is all about the rice.

And, you can't use just any rice. Bomba is the best, and, of course, it's from Spain. This short-grained rice can absorb about three times more liquid than regular rice, meaning three times more flavor for your paella. Despite all the liquid, the rice remains firm. Bomba and other Spanish short-grained rices are available from specialty food shops and by mail. Bomba, however, is not cheap. Fortunately, easily available arborio — the rice used to make risotto — can be used. Just stay away from long-grained rice, which is less absorbent and doesn't have the right taste or texture.

The next misconception I had to toss out was that paella is loaded with ingredients — chicken, sausage, peas, peppers, onion, white fish, shellfish, the kitchen sink.

"Such paellas are frowned upon in Valencia," writes Casas, "because they do not allow each ingredient to be savored and appreciated on its own merits." The best paellas, she writes, focus on meat, fish or vegetables but don't mix them all together.

When my friend Luis Costa was growing up in Galicia in the northwest corner of Spain he never ate paella. It was a southern dish, he says, and he was a northerner. But when he went back to his village recently he visited a cousin who served paella, now common throughout the country.

Where Luis comes from, they eat a lot of mussels. So his cousin cooked a big pot of mussels and used the resulting liquid to make the paella. He added squid, shrimp and clams. He also put in Spanish chorizo to further flavor the rice. Luis warns that only Spanish chorizo should be used. Mexican chorizo, he says, is full of chili and will overwhelm the delicate flavor of paella.

When it was time for my party, I did what Luis and Penelope told me to do. I couldn't find Spanish chorizo so stuck with straight seafood. I have no regrets. I was tempted by the special paella grill — it costs less than $40 online, see details below — but found the Weber worked just fine.

I built a hot bed of coals and cooked everything sequentially in my new paellera. (I had sauteed the fish and shrimp in advance in the kitchen.) The fire just needs to be hot enough to bring the liquid to a boil when the rice is added. The grill is never covered.

Another tip was to throw fresh herbs or grapevines on the coals to further flavor the paella. Having no grapevines, I used sprigs of rosemary and thyme. I don't know if they added flavor, but the yard sure smelled good.

Sitting on my city patio with a cup of gazpacho, a glass of sangria and a paellera piled high with beautiful golden rice and accents of red pepper, pink shrimp and black mussels, we could easily have been enjoying a summer evening in Spain.

This recipe is adapted from one in Penelope Casas' book Paella! Spectacular Rice Dishes from Spain. It serves eight hungry people. You can substitute whatever seafood you like.

Don't panic when you read the recipe. It looks a lot more complicated than it is. Like a stir-fry, everything can be prepared ahead so you just have to do assembly at the grill. And don't shy away from using the grill. As a controlled experiment on this dish, I made a smaller version inside on the stove. There was no comparison. Head outdoors.

Making paella is a very social production — perfect for a party. While you're cooking, guests can sit outside sipping sangria or cava (Spanish champagne) and eating marconas (Spanish almonds) and manchego (Spanish cheese).

All the fish, shellfish and vegetables can be cleaned, cut up and refrigerated hours in advance.

1 1/2 pounds monkfish and grouper or other firm-fleshed fish, cut into bite-size pieces**

18 large shrimp in their shells

*Luis recommends using only saffron from Spain to ensure it's the real thing.

**I used cod since it was all they had at the fish market. It was fine.

***There is a debate among paella makers about whether to use onion. I thought it added to the dish.

****Luis says in Spain, red peppers are not used in paella. Rather, jarred pimentos are sprinkled on top of the finished dish for color.

Place 1 1/2 dozen mussels in a skillet with 3/4 cup water. Cover and bring to a boil on the stove. Remove the mussels as they open. Reserve the meat and discard the shells. When all the mussels have opened, pour the liquid from the skillet into a large pot and add enough clam juice to make 6 cups. (I found I needed a lot more liquid, so have extra clam juice on hand.) Stir in the saffron. (You can prepare this in advance, cooling and refrigerating the mussel meat and the broth for a few hours. If you make the dish straight through, keep the broth hot over a low heat on the stove.)

Dry the fish and shrimp well between paper towels. Sprinkle all over with salt and let sit 10 minutes at room temperature. With a mortar and pestle (something I've never mastered) or a miniprocessor (I used my big processor), mash the parsley, garlic, thyme and 1/8 teaspoon salt into a paste. Stir in the paprika; add a little water if necessary to make the right consistency. (This can be done up to a day in advance. Refrigerate and bring to room temperature before using.)

Heat 6 tablespoons of the oil in a skillet and quickly saute the fish and shrimp (in their shells), 1 to 2 minutes. They should not be fully cooked. Remove the seafood to a warm platter. This can be done over the fire. I just found it easier to do this step on the stove. (This can be done an hour or so in advance.)

When you're ready to prepare the paella, reheat the broth and start the fire.

When you have a good, hot bed of coals, put the remaining 2 tablespoons of oil, the onion, scallions and red peppers in the paella pan and cook over the grill until the vegetables are slightly softened. (The paella pan sits on top of the grill.)

Stir in the rice and coat well with the pan mixture. Pour in enough hot broth to cover the rice. The liquid should be boiling. Stir the rice and rotate the pan occasionally. Add all the reserved fish (but not the shrimp), the reserved mussel meat and the parsley mixture. Taste for salt and continue to boil until the rice is no longer soupy but sufficient liquid remains to continue cooking the rice. Add liquid as needed as you would with risotto.

Arrange the shrimp and the uncooked mussels over the rice, placing the edge of the mussel shells that will open facing up. Cook, uncovered, for 15 to 20 minutes, until the rice is almost al dente. (If the mussels and clams aren't opening, they may be removed and steamed in a separate pan, then added to the paella.) Remove the pan from the fire and cover with foil. Let sit 5 to 10 minutes until the rice is cooked to taste. Garnish with lemon wedges.

I served a simple gazpacho for a first course. I planned to serve a salad but we were all too full.

Note: Paella grills are double ringed and fired with gas or butane. They are available by mail order from places such as The Spanish Table (www.spanishtable.com), which calls them butanos.

If you like sangria sweet, use a light red wine. If you prefer it drier, use a hearty red. If the wine is very dry, you may want to add another tablespoon or two of sugar.

Mix wine, brandy and sugar and add fruit. Stir well and refrigerate 3 to 5 hours. Just before serving, add club soda. Stir to mix and serve over ice. Make sure everyone gets some fruit.