Accessibility links
China's Sports Machine Mints Olympic Gold China now leads in the gold medal count with almost 40. Just 20 years ago, it won only five. New government programs and a focus on sports like weightlifting, judo, wrestling and others have catapulted the nation to the top. 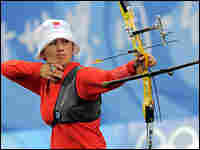 Zhang Juan Juan of China won the gold medal in women's individual archery at the Beijing Olympics. Archery is one of the sports China targeted for medals as part of its low-hanging fruit strategy. Ung Yeon-Je/AFP/Getty Images hide caption 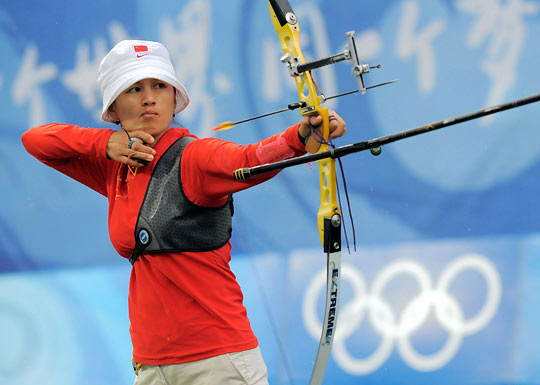 Zhang Juan Juan of China won the gold medal in women's individual archery at the Beijing Olympics. Archery is one of the sports China targeted for medals as part of its low-hanging fruit strategy.

Even before the Olympics began, it was expected that China would harvest the most gold medals in Beijing. But the sheer range of events where China has won gold is remarkable — from weightlifting and judo and badminton, to diving and swimming. On Sunday alone, China won eight gold medals.

The host country normally boosts its medal count from previous Olympics. Money pours into elite sports development, new facilities get built and a national mission of sorts goes into the medal chase.

But what China has done is on a different order of magnitude. At the 1988 Olympics in Seoul, China won only five gold medals. This time it may win 10 times as many. The U.S. was the overall gold medal winner at the past three Summer Olympics. This time it will finish a very distant second to China.

Even before China was awarded the games in 2001, the country's sports bureaucracy focused on developing Olympic champions. The funding for elite sport development — from direct government support and proceeds from lottery ticket sales — has grown as China's economy has prospered.

Always strong in diving, gymnastics, table tennis and badminton, China honed in on sports like women's weightlifting, archery and shooting, where the global talent pool isn't deep and other athletes don't receive much financial support. The low-hanging fruit strategy has paid off handsomely.

Layered on to this approach is a huge and sophisticated government sports apparatus that identifies promising young athletes through a network of coaches. Some 200,000 Chinese children are said to be living and training at elite sports academies. In sports like gymnastics, kids start boarding at 6 or 7 years old. Their lives are difficult, but the potential rewards are enormous.

If this sports factory approach seems familiar, just think back to Communist East Germany and the Soviet Union, where sports had their own ministries and gold medals became a tool of government policy.

It should be noted that China isn't the only country with a government-backed sports machine. The Wall Street Journal recently reported how Germany is taking up central sports planning in the old East German mode, replacing community sports clubs traditional in western Germany. Japan and Australia fund centralized sports programs as well. The model here is essentially the same: introduce sports to very young children throughout the country. Then spot the few truly talented athletes and spare no expense to surround them with the best in coaching, training, nutrition and equipment.

Reaction In The U.S.

If the U.S. gets trounced by China in the gold medal count, there will be some hand-wringing about the decline of America's Olympic prowess. And in the country's sour national mood, some will say we're doing it all wrong and should emulate the Chinese sports model. But don't expect those voices to get very loud. A big government program to churn out Olympic athletes just isn't in our national DNA.

In the U.S., Olympic athletes emerge from a patchwork quilt of local clubs, high school and college teams. Parents and volunteer coaches are involved — sometimes too involved. When athletes finally get selected for a national team, they receive some modest help through the United States Olympic Committee. But Olympic sports receive no direct government funding. Success depends more on individual and family commitment than a sense of national purpose.

In America, Olympians tend to lead pretty normal lives. They go to school or hold down jobs. They don't live in luxury and aren't recognized on the street. It's all fairly grass roots compared to the huge business of professional sports like football and baseball, and to the Olympic sports machines of China and other countries.

Don't expect the American system to change even if China runs away with the gold medal count. It has been the most successful over time, even as expensive government sports crusades come and go.