Accessibility links
Soviets Attacked Czechs' 'Virus Of Freedom' In '68 An attempt to mesh democracy and communism in Czechoslovakia by introducing free speech and freedom of assembly was squashed when Soviet officials invaded the country on Aug. 21, 1968.

First of a two-part series. 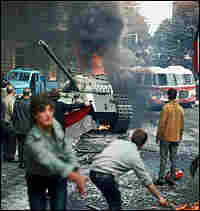 Prague residents carry a Czechoslovak flag and throw burning torches in an attempt to stop a Soviet tank during the Aug. 21, 1968, invasion by the Warsaw Pact armies. Libor Hajsky/AFP/Getty Images hide caption 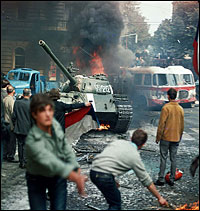 Prague residents carry a Czechoslovak flag and throw burning torches in an attempt to stop a Soviet tank during the Aug. 21, 1968, invasion by the Warsaw Pact armies.

Watch footage of the invasion, which ended a movement that aimed to mesh democracy with communism. 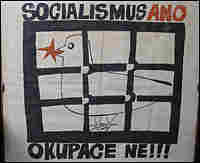 A poster from the August 1968 Soviet invasion shows a dove with an olive branch behind prison bars and says "Socialism Yes, Occupation No!!!" Sylvia Poggioli/NPR hide caption 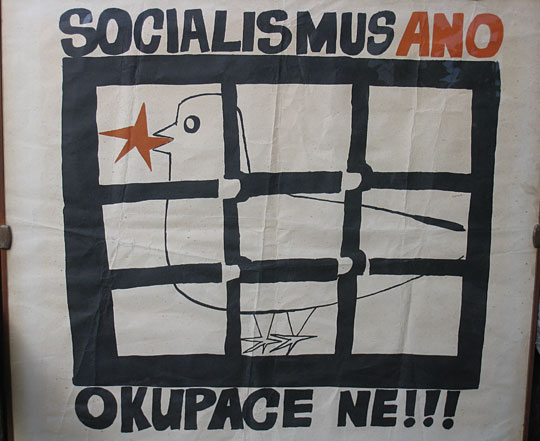 A poster from the August 1968 Soviet invasion shows a dove with an olive branch behind prison bars and says "Socialism Yes, Occupation No!!!"

Czechs stand atop an overturned truck and surround tanks in Prague on Aug. 21, 1968, on the first day of the Soviet-led invasion by the Warsaw Pact armies that eventually crushed the Prague Spring reform movement. Libor Hajsky/AFP/Getty Images hide caption 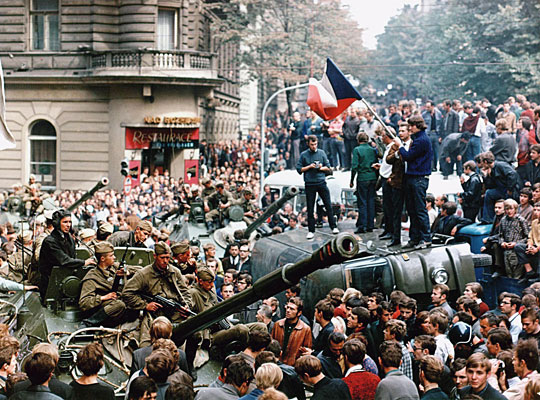 Czechs stand atop an overturned truck and surround tanks in Prague on Aug. 21, 1968, on the first day of the Soviet-led invasion by the Warsaw Pact armies that eventually crushed the Prague Spring reform movement.

Zdenek Zboril, a student leader in 1968, was in Wenceslas Square when an official car drove by and people applauded the Communists. Sylvia Poggioli/NPR hide caption 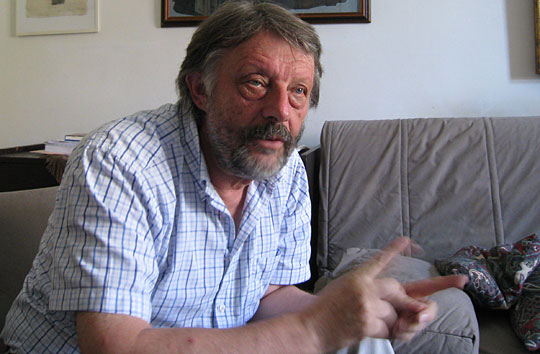 Zdenek Zboril, a student leader in 1968, was in Wenceslas Square when an official car drove by and people applauded the Communists.

When Czechoslovakians woke on Aug. 21, 1968, they found their country occupied by 500,000 Warsaw Pact troops. Moscow officials feared that the Czechoslovak Communist Party's embrace of democratic reforms would infect the rest of the Soviet sphere.

The invasion put an end to the Prague Spring, a brief season of political and cultural freedom, as the attempt to blend communism and democracy failed.

Today, the legacy of the Prague Spring and its violent crushing are felt more strongly beyond the borders of the Czech Republic and Slovakia. But in the days after the Soviet tanks rolled into the city 40 years ago, Prague's population rallied in an attempt to retain their transformed society.

'They Were At Such A Loss'

At 2 a.m., as Russian soldiers surrounded the Czech Radio building in the center of Prague, an announcement was broadcast: "This act is contrary to the principles of international law. ... We appeal to all citizens to remain calm and to offer no resistance."

"It was big shooting; it was dramatic when they came to the studio and stopped from our broadcasting," says Jiri Dienstbier, who was a radio reporter at the time. "We succeeded in informing the population and the world, not only that there is invasion, it was clear, but that it was refused and condemned."

The population rallied. Before dawn, tens of thousands of people were in the streets, surrounding tanks and arguing with the soldiers.

"I watched these young confused faces," says Ivana Dolezalova, who was 18 the day of the invasion — the same age as many of the soldiers occupying her country. "I realized they had no idea where they are, why they are here. They were told of course they had to crush counter-revolution, but they were at such a loss."

Party secretary Alexander Dubcek was arrested and flown to Moscow, but within a day, the remaining leaders held a party congress at a factory guarded by workers' militias.

Zdenek Zboril, a student leader in 1968, was in Prague's Wenceslas Square when an official car drove by.

"There are delegates of party congress and all Wenceslas Square applauding them. It was first time in history somebody applauding the communists, yes," Zboril says.

The applause for Czechoslovakian communists was so great that Soviets were unable to prop up a puppet government — despite the presence of one occupying soldier for every 20 inhabitants.

In the country of the anti-authoritarian Good Soldier Sveik, people resorted to artful sabotage: Street and directional signs disappeared or were misplaced — Russian convoys headed for Prague ended up on the Hungarian border. Walls were covered with anti-occupation poems and cartoons. Information flowed through an improvised network of amateur radio buffs.

"It was a really huge outburst of creativity in culture, in arts," he says. "Civil society was being revived at a very fast pace. So, it was a one-party state, but with many different centers of independence."

In the 1950s, Stalinism was imposed on the Czechoslovak Communist Party through brutal show trials and the execution of 11 party leaders. A few party apparatchiks held all decision-making power. Most party-appointed company managers had little more than an elementary school education.

In the early 1960s, a man selling lapel buttons was sentenced to five years in prison for bourgeois deviationism. For this highly industrialized country — the only democracy in Eastern Europe during the two world wars — Stalinist central planning was an alien and brutal imposition.

The turning point was the Czechoslovak Writers Congress in June 1967.

"From this tribune, you could hear really strong criticism of everything, censorship and the party bureaucracy," says Ivan Klima, one of the best known Czechoslovakian novelists.

The most devastating critique came from Klima's colleague, Ludwik Vaculik.

"He criticizing the whole regime as a lie and as collection of mistakes," Klima says. "His most famous sentence is that 'this regime didn't solve even one human problem and that they should be grateful if we are patient still.' "

The speech was immediately circulated as a samizdat in thousands of copies.

Like many times before in Czechoslovakian history, says Jiri Pehe, intellectuals were the vanguard of political reforms.

"Society got infected, so to speak, with this virus of freedom, and people realized, 'OK, now it is our turn,' " he says.

Within months, a bevy of associations sprouted. Many harkened back to the civil society network of the inter-war period of democracy — sports and women's groups, Boy Scouts, river fishermen and choruses. Others were new — trade unions, student associations and human rights groups. Borders were opened, and people traveled abroad.

Sociologist Jan Hartl came from an anti-communist family, but he too embraced the Prague Spring of the communist reformers.

"I was provoked by the situation of openness, free discussion. It helped to orient my life; it had a clear civilizing, open-minded effect. We all were formed by 1968," Hartl says.

That year was ushered in by the election of the 46-year-old Dubcek. Timid and awkward, he had studied at party schools in Russia.

Under Dubcek, the party's action program abolished censorship, allowed a free press and freedom of association, and promoted degrees of market economy. Dubcek would often say his main goal was to help the Soviets reform communism.

Cestimir Cisar — one of the last living members of Dubcek's governing circle — recalls a man who emitted optimism. For him, this political debate was not only acceptable, Cisar says, but also necessary.

When the attempt to blend communism and democracy was brutally crushed, Cisar says Dubcek cried, "How could they do this to me?"

The invasion was a military success. Yet widespread resistance made it a political failure, and Moscow had to reinstate Dubcek.

But the country's sovereignty was restricted. And less than a year later, Dubcek was ousted. The military intervention was widely denounced by European communist parties.

"The invasion destroyed the international communist movement, which was, I must say, the main merit of this Prague Spring," Klima says.