Accessibility links
Has U.S. Relied Too Much On Musharraf? Pakistan's outgoing President Pervez Musharraf was a close U.S. ally in the fight against al-Qaida. But critics say the Bush administration relied on him too much, and that he didn't do enough to rein in the Taliban. With Musharraf out, Pakistan is expected to concentrate on preventing extremism inside Pakistan rather than across the border.

Listen
Has U.S. Relied Too Much On Musharraf?

Pakistan's outgoing President Pervez Musharraf had been a close U.S. ally in the fight against al-Qaida. But critics say the Bush administration relied on him too much, and that he didn't do enough to rein in the Taliban. With Musharraf out of the picture, the country's government is now expected to concentrate on preventing extremist attacks inside Pakistan rather than cross-border attacks into Afghanistan. 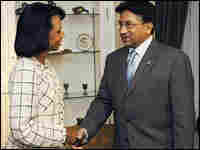 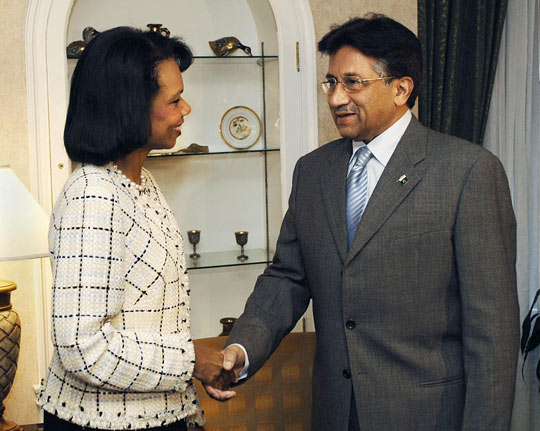 Secretary of State Condoleezza Rice (left) meets in New York with Pakistan President Pervez Musharraf in 2005. After his resignation Aug. 18, 2008, Rice praised the former general as a friend to the United States.

Pervez Musharraf's departure as president of Pakistan leaves the Bush administration without the man it once praised as an "indispensable" partner in the war against terrorism. Many analysts say it's time the U.S. adopts a Pakistan policy that's geared to the country and not to a single leader.

After the resignation, Secretary of State Condoleezza Rice praised the former general as a friend to the United States, and she credited Musharraf with making "the critical choice to join the fight against al-Qaeda, the Taliban and other extremist groups." But before her statement even mentioned Musharraf, Rice was careful to express strong support for the civilian government that pushed him out.

"The United States supported the transition to democratic government in Pakistan," Rice said, an implicit acknowledgement that the government under Musharraf was not democratic, although it had staunch U.S. support ever since the Sept. 11 attacks in 2001.

The Bush administration continued to support Musharraf after elections in February saw the effective loss of his political power to an opposition coalition led by former Prime Minister Nawaz Sharif and Asif Ali Zardari, the widower of assassinated former Prime Minster Benazir Bhutto.

The decision to focus the relationship between the two countries on the personality of one man was a mistake, says Teresita Schaffer, who directs the South Asia program at the Center for Strategic and International Studies. The U.S. made itself controversial in Pakistan, Schaffer told NPR, "partly because the U.S. stayed in visible support of Musharraf even after it became clear that the voters had rejected him."

Selig Harrison, head of the Asia program at the Center for International Policy, says Musharraf's departure presents an opportunity for the U.S. to undo some of the damage caused by its relationship with the former general.

Musharraf played the U.S. "like a fiddle," Harrison says. For one thing, he says, the Pakistani leader never removed elements from his intelligence services that were working against the effort to fight the Taliban and al-Qaida.

When Musharraf did cooperate with the U.S., Harrison says, he often made the situation in Pakistan worse, as when he ordered his intelligence services to cooperate with the CIA in the "rendition" of terrorist suspects. Such actions, Harrison says, stirred widespread anger among the Pakistani population and helped trigger a wave of anti-Americanism.

Harrison says Musharraf's resignation should allow the U.S. to let that anti-Americanism die down and to "shut up and do absolutely nothing but respond to initiatives from the new government."

Democratic presidential candidate Barack Obama issued a statement saying that Musharraf made the right decision to step down. It reiterated his position that "the central terrorist threat to the United States lies in northwest Pakistan and Afghanistan, and not Iraq." The Illinois senator also claimed credit for saying a year ago that the U.S. should move from a "Musharraf policy" to a "Pakistan policy."

Sen. John McCain, the Republican candidate, called Musharraf's resignation "a step toward moving Pakistan onto a more stable political footing." McCain expressed the hope that elections for Musharraf's successor "will serve to reconcile the Pakistani people behind a leader who can solidify their government internally."