Accessibility links
Michael Beschloss: Tales Of The LBJ Tapes President's daily conversations shed light on the aftermath of the Kennedy assassination, the progress of the civil rights bill and the escalation of the Vietnam War. 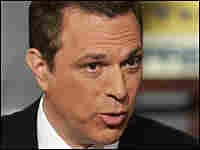 When Lyndon B. Johnson took office as president, after the assassination of John F. Kennedy, he began making daily recordings of his private conversations.

Historian Michael Beschloss transcribed and edited the tapes' contents and provided commentary on them in his book Taking Charge: The Johnson White House Tapes, 1963-1964.

The book sheds light on Johnson's thoughts during the aftermath of the Kennedy assassination, the creation of the Warren Commission to investigate it, the progress of the civil rights bill and the Gulf of Tonkin attack. And it illuminates Johnson's decision-making process during his administration's escalation of the Vietnam War.

Beschloss has written several other books; his latest is Presidential Courage: Brave Leaders and How They Changed America, 1789-1989.