Accessibility links
Raccoons' Craving For Peaches Is The Pits Living in the country and growing your own food seems romantic, but protecting that food from animals that also want it can be a battle. But free advice can end up being mighty costly in the end.

Listen
Raccoons' Craving For Peaches Is The Pits 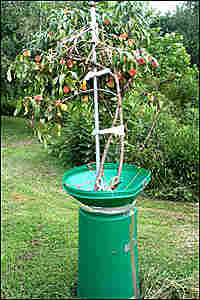 Commentator Julie Zickefoose duct-taped a yard funnel to her peach tree to keep raccoons away. Although the tree is trussed up like a turkey, a few peaches still glimmer among its leaves. Julie Zickefoose for NPR hide caption 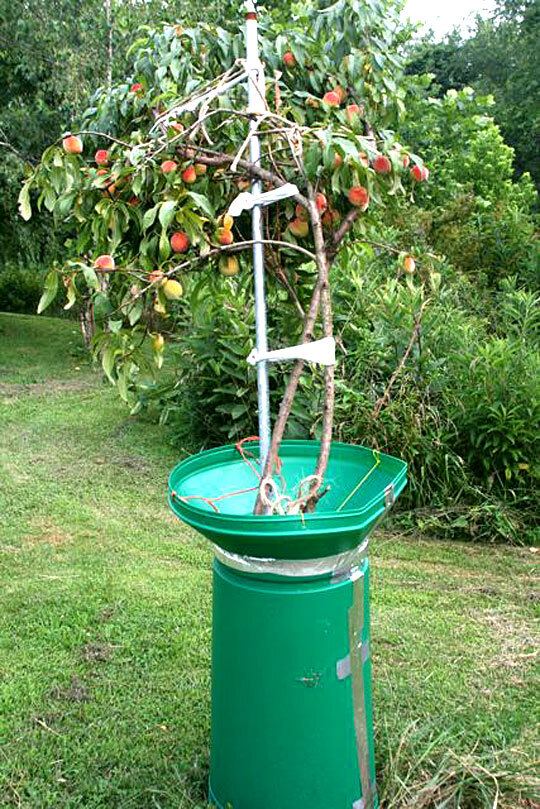 Commentator Julie Zickefoose duct-taped a yard funnel to her peach tree to keep raccoons away. Although the tree is trussed up like a turkey, a few peaches still glimmer among its leaves.

We've had a little peach tree in the backyard for five years. The variety is Defiance, so named because it blooms early, undeterred by light frosts.

In its second year, it produced one huge, luscious peach, which a raccoon took the night that it turned perfectly ripe. In its third year, it made two more, and scratches appeared on the fruit as it ripened — the raccoon was testing it for perfection. I picked that one a day early, grinning as I imagined the 'coon, climbing up the tree, only to find that he'd been had. It was the most delicious peach I'd ever eaten.

This spring, the tree finally made a decent batch of peaches. Perhaps 20 of the green-golden globes hang on its slender branches — a powerful lure to raccoons and woodchucks. I was seized with the desire to have them all to myself. How could I keep the varmints off the little tree? Raccoons are nothing more than bears in miniature — strong, determined, able to climb about anything and rip apart what they can't get around.

Stovepipe wrapped around the trunk — that'd do it. But the tree was too big around for that. Perhaps I could buy some sheet metal to wrap around it.

My quest took me to Metaltech, where I talked the problem over in a dimly lit warehouse with a man named Ray. There was no sheet metal thin enough to bend, much less wrap around a tree. Ray suggested making a box around the trunk, using 16-gauge sheet metal. I could put it together with screws in the corners, he said.

I plunged ahead with the notion, and Ray cut four pieces of sheet metal, 3 feet by 4 feet, and laid them in the back of my car. The car sagged visibly from the weight. I wasn't sure how I'd lift the sheets of razor-sharp steel out, much less make a coon-proof box from them.

He totaled it up on an ancient adding machine — $154 for a couple of dozen peaches. I swallowed hard. At that point I couldn't turn back; the metal was cut. Oh, well, it would be an investment in the future.

I pulled into our driveway and raised the gate for my husband, Bill, to admire my solution to the raccoon/peach problem.

"Oh, honey. I don't have a drill that will go through that, and we'll cut ourselves to pieces on those sharp edges. Besides, do you really want to look at a 3-by-4 sheet metal box in the backyard — especially once it rusts?"

So much for our Saturday project. On Monday, I called Ray with the news.

"We were talking about that after you left," he said. "I said, 'Once her husband sees that, he's gonna hit the roof!'"

"You know what you oughta do? We were talking about this after you left. You oughta rig up some chicken wire with a 110 on 'er."

I realized he was talking about a 110-volt battery, rigged to electrocute.

I said I'd think it over. Ray said he'd take the sheet metal back if I brought the receipt. I drove the load back, and Ray handed me my check, uncashed. I nearly fell to my knees in gratitude. At least I'd given the men in the warehouse something to laugh about for a while.

"Bring us some peaches if you figure out something that works," they called.

I wandered into our local hardware store just to look, and found a bizarre-looking heavy plastic tube called a yard funnel. It was almost 4 feet high. I brought it home, sliced it down the side with a box cutter, wrapped it around the tree, duct-taped the side closed, and weighted the whole affair down with boards and bricks. There had to be duct tape involved at some point.

The little peach tree is all trussed up like a turkey now, tied in a dozen places to an iron pipe with ropes and torn up tube socks, encased in a Kelly-green plastic tube topped with a stack of bricks. It looks like a patient in traction. A few peaches still glimmer among its leaves. There are six men at a steel warehouse waiting for their peach pie. If I have to buy the darn peaches, I'm going to take them one.

Commentator Julie Zickefoose lives in imperfect harmony with the wildlife on an 80-acre sanctuary in the Appalachian foothills of Ohio. She's the author of Letters From Eden.