Accessibility links
Good, Better, Best: Finding Phelps' Place In History Ever since Michael Phelps clinched his eighth gold medal at the Beijing Olympics, analysts have debated the swimmer's place in the sports pantheon. But Frank Deford says it's impossible to compare Phelps to other sports greats, past or present. 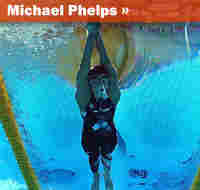 In quick succession, I've been asked to lend my presumed wisdom to the following questions:

1) Is Michael Phelps or Babe Ruth the greatest Baltimore athlete?

2) Is Phelps the greatest Olympian ever?

3) Is Phelps the greatest athlete of all time?

Sports being both competitive and argumentative, this stuff is indigenous to the subject. Who's better? Whaddya think? I'd say ESPN has made an art form out of it, but I don't want to insult art.

Somehow, I don't think at, say, down at the Explorer's Club, they debate regularly about who's the better explorer: Vasco da Gama or Robert Peary?

Still, sports couldn't survive off the field without pitting someone against someone else.

But the questions are impossible. First of all, how do you even begin to rate any team athlete against an individual sport athlete? What is the basis of comparison between a shortstop and a golfer? It's hard enough judging two shortstops. None of this nonsense takes place anywhere else.

Excuse me, we're taking a poll. Who do you think is better: Shakespeare, Rembrandt, Mozart or Caruso?

The issue of pre-eminence in sport is heightened because, of almost all the institutions in the world, it's about the only one where it is accepted that the principals get better all the time. In sports it's an article of faith that somebody paints a better Sistine Chapel ceiling about every other weekend.

Remember when, oh about five minutes ago, Roger Federer was surely the best tennis player of all time? Now, all of a sudden he may not even be considered the best player of his generation.

And, of course, in sports where performance is measured by the clock, we can see that, intrinsically, humans are getting faster. With his times from 1936, Jesse Owens wouldn't get near today's Olympic starting blocks.

In sport, we bow to the numbers and worship the immediate. But that's unfairly out of context. You don't measure Jesse Owens against runners 70 years later who have improved equipment, training, diet. You measure how he did at that time that he was given to compete. It's like saying Napoleon was a lousy general because he didn't know how to deploy air power.

But I think you can say this, that what Phelps did last week may well constitute the single most sustained success any athlete ever achieved in an intense period.

He's been compared to Secretariat, but that's really not apt. Because Phelps swam 17 races, he was often going up against much fresher competitors. More than Secretariat, who won at equal weights, Phelps was like a horse being handicapped — weighted down with 135 pounds on his back while everybody else swam with 120.

But I'm sorry — I have no idea where he ranks in the pantheon of athletic greatness. I just know that by what he did, with as much grace and courage, day after day, Michael Phelps made the human spirit ascend, and that's as good as it gets, whenever, wherever.