Accessibility links
Bacteria Fingered As Killer In 1918 Flu Pandemic Bacterial pneumonia attacked virus-weakened lungs and killed most of the 50 million victims of the 1918 flu pandemic. This finding may be good news should another flu pandemic strike, because doctors are now armed with effective treatments for bacterial infections. 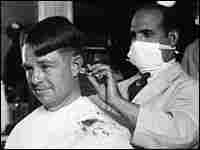 Origins Of The 1918 Pandemic

It's not often that you find countries fighting to claim credit for the birth of an epidemic.

But when it comes to the deadliest pandemic in history, scientists from two superpowers are calling dibs rather than pointing fingers.

The virus that killed tens of millions worldwide after it appeared in 1918 has been recreated in the virological equivalent of the Jurassic Park story.

Scientists rebuilt it from pieces of genetic material retrieved from the lungs of people who died 87 years ago.

What killed tens of millions of people around the world in the 1918 flu pandemic actually might not have been a flu virus. A new study in the Journal of Infectious Diseases blames different agents: bacteria.

The flu virus weakened lungs, opening the door to fatal bacterial pneumonia in most of the pandemic's 50 million victims, according to researchers at the National Institute of Allergy and Infectious Diseases.

The researchers based their findings on preserved lung tissue from 58 soldiers who were infected by the flu and died in 1918 and 1919. They found tissue changes that are the hallmarks of bacteria, not viruses, as well as the destruction of cells that normally protect lungs from bacteria.

They also studied case reports from 1918 in which doctors said they suspected a second infection. One doctor said that the flu "condemns," but secondary infections "execute."

The new research suggests that with the availability of effective treatments for bacterial infections, a modern-day flu pandemic might not be so deadly.