Accessibility links
Prague Spring Ignored In Post-Communist Society Tourists in the Czech Republic are not likely to find a plaque commemorating the failed democratization process known as Prague Spring and the generation of 1968. Critics say people want to forget there was a period of communism in Prague. 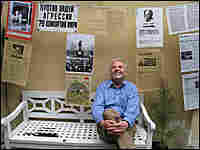 Karel Srp, a former dissident, is the curator of a small exhibit in Prague commemorating the 40th anniversary of the Warsaw Pact invasion. Sylvia Poggioli/NPR hide caption 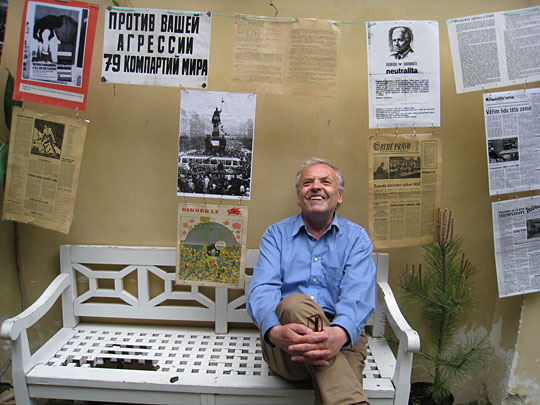 Karel Srp, a former dissident, is the curator of a small exhibit in Prague commemorating the 40th anniversary of the Warsaw Pact invasion.

Today, Prague is a primary stop on the grand European tour. Throughout the year, millions of visitors wander through this jewel of medieval, baroque and art-deco architecture. The central Wenceslas Square — where Soviet troops clashed with citizens in August 1968 — is now lined with elegant shops and pricy restaurants.

But tourists are not likely to find any plaque commemorating the Prague Spring and the generation of 1968, and the brief season of freedom appears distant and irrelevant to young people like Teresa Otava.

"I live this time and I think about nowadays problems, and not very often about the past," Otava says.

In recent weeks, there has been just one tiny exhibit marking the violent end of the movement.

Tucked away behind a garden, yellow newspaper clippings, photos and cartoons hang from a clothesline, while a tape recorder spouts the audio of the invading planes and tanks. The only person at the exhibit is the curator.

"Everybody was surprised because nobody believed that Russians will come, absolutely no," Srp says. "And the morning was half million soldiers, many thousands tanks were in Prague and Czech Republic, and it was occupation."

Srp, a chemist by training, lost his job after the invasion, but found his calling in the underground. He created a club, Jazz Section, that published clandestine books and organized jazz concerts.

Srp was arrested, but given a relatively short two-year jail term, thanks to vocal international support from authors John Updike and Kurt Vonnegut, who denounced the suppression of cultural freedom.

Today at 71, Srp says an entire generation that had embraced the new freedoms was marginalized by two decades of repression.

"Nobody believed that 20 years it will continue, believe me," he says. "I think maybe five years, maybe six years, of course, but not 20. I was young and I was old, that's all."

In 1968, the people of Czechoslovakia and their leaders were convinced they could blend socialism and democracy.

They were emerging from a long period of harsh dictatorship. The country was rediscovering its traditional democratic values — people could travel abroad, censorship was lifted and freedom of association was introduced. People started socializing again. Friendships were resumed as neighbors — long divided by fear — clarified misunderstandings and overcame mutual suspicions.

But for the hard-line regime in Moscow, the Prague Spring was an infection to be eliminated and the period of repression that followed was given the Orwellian-sounding name "normalization."

The purges were massive. Every citizen was subject to political screening and more than 500,000 people were expelled from the Communist Party for revisionism.

Teachers, professors and managers were fired and had to work as bus drivers, bathroom cleaners and garbage collectors. When authorities realized these jobs allowed the "'68 reformers" to maintain close contact with the public, they were further isolated and could work only as night watchmen or boiler room stokers. Their only crime was refusing to sign a statement approving the so-called brotherly help brought by the Soviet-led Warsaw Pact invasion.

"Which meant that your life is pretty much ruined and that, of course, will ruin your children as well because then they were not allowed to study at the universities and they also had to do menial jobs, and it was kind of total punishment," says Ivana Dolezalova, who teaches modern Czech film and history.

Forty years ago, she was ostracized as the daughter of reformers and her job applications turned down. But joblessness was also a crime.

"If you didn't have a stamp in your I.D. that you are working someplace, you were called a parasite of society, which meant that you could be put to prison just for not working," Dolezalova says. "So, you had to have some job, and it was difficult if nobody wanted you."

'They Are Stealing Everything'

In 1968, Ivan Klíma already had an international reputation as a leading novelist and could have remained at his teaching job in the U.S. But like the majority of Czechoslovak intellectuals, he decided to return home.

His novel Love and Garbage — based on his work as a trash collector — is a meditation on life under a dictatorship.

Klíma also worked as an orderly in a hospital where he observed one way the regime kept people quiet — by letting them fill their pockets in any way they could.

"They really tried to steal everything," Klíma says. "They were repairing these radiators from central heating, they needed to change maybe 50, but they had to ask for 100, because 50 disappeared."

Klíma says people would even steal beds during the night.

The Trauma Of Normalization

During the normalization period, playwright Vaclav Havel and the other founders of the human rights group, Charter 77, were repeatedly imprisoned. But, there were no executions and Czechoslovakia's grocery shops were well stocked — in contrast to shops in many of its communist neighbors — and people were even allowed to own summer cottages.

But Jirí Pehe, director of the New York University program in Prague, says everyone had to pay their dues.

"The entire society had its public face, which lasted from Monday to Friday morning in which people would go along, they would participate in the rituals and they would behave as though they have no problem with the Communist system," Pehe says.

But on Friday, he continues, they would all leave for their summer houses. In private with their friends, they would be free to say what they think, creating what he called "a totally schizophrenic society."

Sociologist Jan Hartl says Czech society has not yet recovered from the trauma of normalization.

"It seems that everybody wants to forget that there has been a period of communism here because of bad conscience, they feel uncomfortable with compromises they had to do, so they pretended it is possible to do a thick line and forget about history," Hartl says.

In fact, the Prague Spring, the Warsaw Pact invasion and the repression that followed are all but ignored in today's post-Communist society. They're absent from school textbooks, and the younger generation is indifferent.

This black hole, Pehe says, has impoverished the country's society.

"We are now in 20th year of freedom after 1989 and we do not have a single novel, or a single film that can compete with what was created during that period," he says. "Yes, we got back our freedom, our democracy, but maybe we didn't get the intellectual atmosphere that was so important in 1968."