Accessibility links
In Election Movies, Playing By A Rule of Three Hollywood has always recognized the potential drama inherent in elections — think The Manchurian Candidate. Bob Mondello and Michele Norris talk about the intersection of ballot box and box office.

Listen
In Election Movies, Playing By A Rule of Three 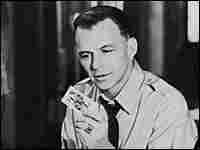 Frank Sinatra in The Manchurian Candidate — a contender for Best Election Film, according to two prominently placed sources within NPR MGM hide caption

NPR asked the presumptive nominees of the two major parties to name their favorite political flicks. Their answers: 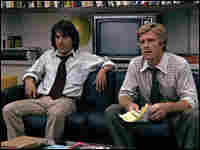 Dustin Hoffman, left, and Robert Redford pursued the Watergate plumbers — and the story of the century — in All the President's Men. Warner Bros. Pictures hide caption

Perhaps unwisely taking my cue from King Lear, who proposed dividing his domain into three parts — one of the more boneheaded political moves in world literature — let me propose a three-way divide of Hollywood, as a way of understanding how its myth makers deal with the politics of election movies.

Tinseltown long ago recognized the drama inherent in elections: sharp battle lines being drawn, a rising arc to tension, a denouement with clear winners and losers.

And filmmakers were also quick to understand the cinematic benefits of concentrating not on speeches and issues but on political skullduggery — behind-the-scenes trickery, attempts to massage messages, desperate ploys to rig election returns.

The result is that while movies with a generically political bent come in all shapes and styles, election movies are almost always about process — specifically, about efforts to manipulate either (a) the media, and thereby the public, (b) the candidate or (c) the process itself. A few notable examples:

• Bob Roberts (1992) In this briskly amusing satire, Tim Robbins plays a folk-singing reactionary who's remarkably successful at presenting himself to the public as a pious populist — until he unwisely gives a British documentary film crew too much access as it follows him on the campaign trail.

• Wag the Dog (1998) When a budding scandal threatens to derail the re-election campaign of a sitting president just days before the nation heads to the polls, his chief political operative (Robert De Niro) needs to distract the press. With the help of a movie producer (Dustin Hoffman), a pop singer (Willie Nelson) and an all-too-plausibly gullible press corps, he has soon trumped up a phony war.

• Power (1986) Richard Gere is a PR specialist who can sell anything to anyone in a political campaign — until he develops a conscience.

• State of the Union (1948) Based on the Howard Lindsay/Russell Crouse play, Frank Capra's dramedy pits craven newspaper editor Angela Lansbury against crafty Katharine Hepburn (as the candidate's estranged wife) in a struggle over whether reluctant politico Spencer Tracy will remain true to his ideals.

• The Candidate (1972) This insider's view of politics (written by one of Eugene McCarthy's speechwriters) establishes that because Robert Redford's title character knows he's going to lose, he has no trouble speaking his mind on the stump. But when it looks as if he's going to be really humiliated, he starts following the dictates of his consultants — soft-pedaling ideals, selling out allies — and begins doing so much better with voters that the unthinkable happens.

• The Best Man (1964) Based on Gore Vidal's play, with main characters that are thinly veiled versions of political figures from the '50s and early '60s: Henry Fonda as an ineffectual idealist in the Adlai Stevenson mold; Cliff Robertson as a ruthless opportunist many find reminiscent of Richard Nixon. Both seek the backing of an ailing president (an intriguing blend of FDR, Truman and Ike) and must decide how much they'll compromise to get it.

• Primary Colors (1998) Based on the Joe Klein novel (itself a roman a clef about Bill Clinton's first presidential campaign), the film stars John Travolta as a candidate who will do almost anything to win, dismaying his allies and causing some of them to take action to force him to alter course.

• All the President's Men (1976) The story of the Watergate scandal — the Nixon White House's real-life attempt to manipulate the system with a midnight raid on Democratic headquarters (and subsequent cover-up) — made for a hugely entertaining screen whodunit. Alan J. Pakula's pristine direction and the look-alike casting of Robert Redford and Dustin Hoffman as reporters Bob Woodward and Carl Bernstein turned it into one of the era's most riveting political films.

An earlier version of this story misidentified the director of the film "All the President's Men." The passage has been corrected.