Accessibility links
5 Things Delegates Should Do In Denver When the Democratic delegates descend on Denver for the party's national convention, they should try to see the "real" Colorado — like getting out of town to see bison or to climb a mountain. Or hit the Buckhorn Exchange for some Rocky Mountain oysters.

Listen
5 Things Delegates Should Do In Denver 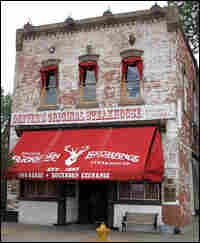 The Buckhorn Exchange — Denver's oldest restaurant — serves a variety of unusual meats such as yak, elk and bison. Many of the animals it serves up are also stuffed and hanging on the wall. Jeff Brady/NPR hide caption 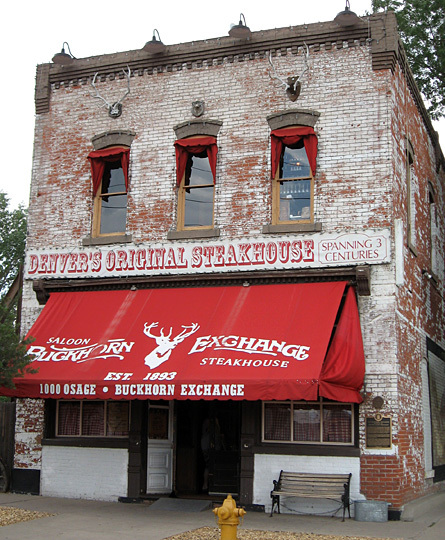 The Buckhorn Exchange — Denver's oldest restaurant — serves a variety of unusual meats such as yak, elk and bison. Many of the animals it serves up are also stuffed and hanging on the wall.

You probably won't notice it until you try to climb a flight of stairs: just a few steps and you feel winded. Welcome to life at 5,280 feet above sea level. Here, tips on avoiding acute mountain sickness. 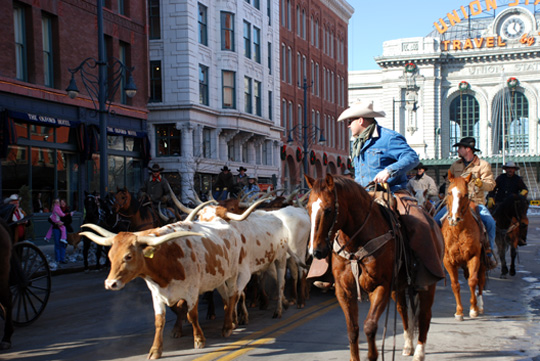 Although city leaders nixed a planned cattle drive for the Democratic National Convention, the party highlighted a similar event earlier this year on its blog.

When the 4,200 Democratic delegates and the media horde following them arrive in Denver for the party's national convention, they'll be the focus of an intense and well-orchestrated campaign to enhance Colorado's image.

The message that visitors will hear is that the Mile High City is a thriving urban center with a well-educated workforce and fancy new museums.

But they may miss out on the "real" Colorado. This is the Colorado the state's "chamber of commerce" types would rather not publicize, because it kicks up a little dust.

To make sure delegates and reporters get a well-rounded view of the state, here's a list of suggested activities:

We're talking the real thing: cowboys on horseback doing rope tricks, long-horned cattle and a demonstration of how livestock was moved to market before cattle trucks.

Sadly, visitors will have to come back in January during the National Western Stock Show to see one. City leaders nixed a preconvention cattle drive for fear Denver would be seen as a "cow town."

The closest place to see them is fewer than 30 minutes from downtown, near Buffalo Bill's grave, which also might be worth seeing. There, you can see about 90 bison grazing hilly fields. The city started the herds nearly 100 years ago as a conservation effort.

3. Eat three kinds of unusual meat, preferably in one sitting.

Try buffalo, rattlesnake, yak, ostrich or elk. The Buckhorn Exchange is the place to go. Make sure you get the horseradish dipping sauce with your Rocky Mountain oysters.

4. Get out of Denver and take in some of the real scenic beauty of the state.

The Sangre de Cristo Mountains in southern Colorado provide stunning views. They are part of the Rocky Mountains, but are often overlooked for those that are closer to Denver. Glenwood Canyon — just over two hours from Denver on I-70 — is a beautiful stretch of freeway. Alongside the Colorado River, the road winds through narrow valleys. If you're lucky, you'll see wild sheep grazing.

And while you're touring the state, you can eat some of the best fruit you've ever tasted: Palisade peaches (from Palisade, Colo., about 230 miles west of Denver) and cantaloupe from Rocky Ford, Colo. (about 160 miles south of Denver).

That stands for a mountain that exceeds 14,000 feet in elevation. Colorado has more 14ers than any other state — among them are Pikes Peak, Mount Evans and Longs Peak.

Denver sits at 5,280 feet above sea level, so you're already a third of the way there!

How To Avoid Altitude Sickness In Denver

You probably won't notice it, until you try to climb a flight of stairs — just a few steps, and you feel winded. Welcome to life at 5,280 feet above sea level.

Aside from being reminded that you're getting older, there are few side effects for most people who have a healthy heart and lungs. The plane ride out to Denver actually helped your body adjust some.

"Those airplanes are pressurized to about 6,000 to 7,000 feet," says Dr. Benjamin Honigman from the Altitude Research Center in Aurora, Colo.

He warns against going directly from Denver International Airport up into the mountains, though. When you start getting above 8,000 feet, the air can have up to a third less oxygen than at sea level. Under those circumstances, about one in four people will experience acute mountain sickness.

"That is characterized by headache, sleeplessness, some nausea or loss of appetite," says Honigman, "but that goes away after a day or two."

You may have heard that at higher elevations you don't have to drink as much alcohol to get drunk.

"That's an urban myth," says Honigman "Alcohol, itself, is not metabolized any differently."

But alcohol can dehydrate you, and Denver has a dry climate.

To compensate for the climate, Honigman says most people should drink 24 to 36 ounces more water than normal.