Accessibility links
Charting New Orleans' Everyday Landmarks The book Cornerstones pays tribute to the places that make a city human: the cornerstones of the city's social geography. In New Orleans, naturally, many of those places are bars.

This is the first in a two-part series about the Cornerstones project in New Orleans, which is dedicated to preserving the city's overlooked landmarks. The second report focuses on a vacant lot in the city's Seventh Ward. 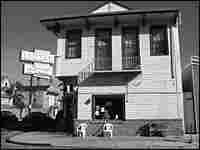 Once a family-run restaurant, Liuzza's By the Track has become a saloon that, on its best and busiest days, feels like "the best-catered community center in America," Abram Himelstein writes in Cornerstones. Courtesy the Cornerstones Project hide caption 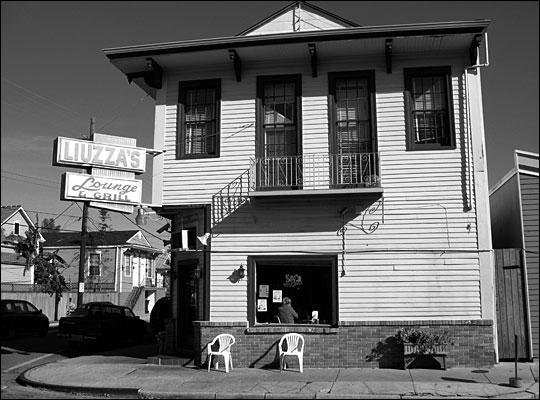 Once a family-run restaurant, Liuzza's By the Track has become a saloon that, on its best and busiest days, feels like "the best-catered community center in America," Abram Himelstein writes in Cornerstones. 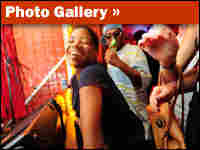 Gallery: A Night at the Leaf 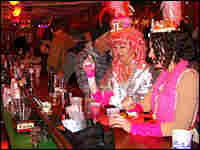 The Maple Leaf Bar, a Carrollton neighborhood institution, draws regulars (in and out of costume) for some of New Orleans' best music. But, as owner Hank Staples explains, it's got "a strong neighborhood-tavern aspect" as well. Courtesy the Cornerstones Project hide caption 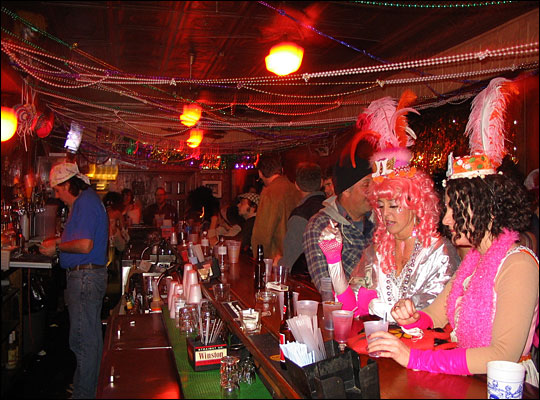 The Maple Leaf Bar, a Carrollton neighborhood institution, draws regulars (in and out of costume) for some of New Orleans' best music. But, as owner Hank Staples explains, it's got "a strong neighborhood-tavern aspect" as well.

With maps, photographs, oral histories and drawings contributed by architecture students at Tulane University's City Center, the book is a loving testament to such overlooked neighborhood landmarks as little museums, barbershops and bars.

Quite a few bars, in fact.

When I ask Cornerstones director Bethany Rogers why she spent so much time and energy working to document a bunch of corner taverns, she laughs — a low, slow throaty chuckle.

Rogers explains that after Hurricane Katrina, she and her co-editors worried that the city's plan for rebuilding might not be sensitive to certain "community environments that build and maintain social and cultural networks."

"Barrooms face their own little challenges of people understanding why they're legitimate," Rogers says. "They can be patrolled, looked down upon. But they really do ground their neighborhoods. It's where people trade information and pass down stories and keep cultural traditions going."

To make Cornerstones happen, Rogers worked with a group called the Neighborhood Story Project, which was inspired by a New York organization called Place Matters. NSP co-directors Rachel Breunlin and Abram Himelstein are former high-school teachers who now work at the University of New Orleans.

But they pour the rest of their time into working with New Orleans residents to make documentary books about their neighborhoods. Later, when the books come out, they stage block parties to celebrate. Their motto? "Our Stories Told By Us."

A Living-Landmarks Tour, With Refreshments

Of course, Rogers and her co-editors took me around to some of the "everyday monuments" documented in Cornerstones. The Maple Leaf Bar, in uptown New Orleans, used to be a laundry — one that didn't accept African-American patronage, according to one black customer I met there.

It became a bar in the early 1970s and soon established itself as a beloved fixture of New Orleans' music scene. Musicians, writers and ne'er-do-wells are barstool regulars, Rogers says. So are the sort of colorful characters who make the city magical. (You'll hear one of them, Tony Cassatt, in the audio story.)

NSP's Breunlin and Himelstein met me at Liuzza's By the Track, a plain, cream-colored mid-city joint described fondly by Himelstein as his "home bar." The saloon is locally famous for its delicious regional food and its location by New Orleans' fairgrounds.

"It's ... one of the places that the horseman and trainers and groomsmen and jockeys have come for an excellent bite to eat and an after-work drink," Himmelstein says. "It's often difficult to discern there who's the customer and who works there."

Unlike Liuzza's or the Maple Leaf, you won't find the Sportsman's Corner in too many New Orleans guidebooks. The unassuming cinderblock bar sits at Second and Dryad in Central City — a corner that happens to be the final stop for some of the city's vaunted second-line parades, a tradition for New Orleans' various social aid and pleasure clubs.

Louis Elloie opened the Sportsman's Corner almost 40 years ago. He suffered strokes during Hurricane Katrina and Rita, and the bar is now managed by his grandson, Steven. The Sportsman's Corner was one of the first places to reopen after the storm — and that made all the difference to some people deciding whether to return to devastated homes.

"They know this place is still standing," Steven Elloie told me. "And they can come back and see a friendly face, a friendly neighbor."

Corner bars are part of the social fabric of every city. But New Orleans, it turns out, may have more of them.

The evidence? Rogers, the Cornerstones director, points to a study showing that the Crescent City had more bars per capita than any other major U.S. city — and fewer bookstores and health-food stores.

The Cornerstones book is a joint production of Tulane University's City Center and the Neighborhood Story Project, which is supported in part by the University of New Orleans. I learned about the book from reporter Eve Troeh, a generous soul and long-time New Orleans resident, and was assisted by NPR producer Emily Ochsenschlager.