Accessibility links
Portable Grass An Olympic Feat In Beijing After the equipment from the opening ceremonies in Beijing was moved out of the Bird's Nest stadium, officials trucked in a portable grass field and put together the 6,000 grass segments for Olympic soccer and track and field competition. 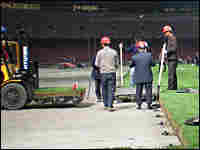 During a test move of the portable turf system, workers installed the field May 13. It was removed after a shot put competition and reinstalled after the Olympics' Aug. 8 opening ceremonies. Michigan State University hide caption 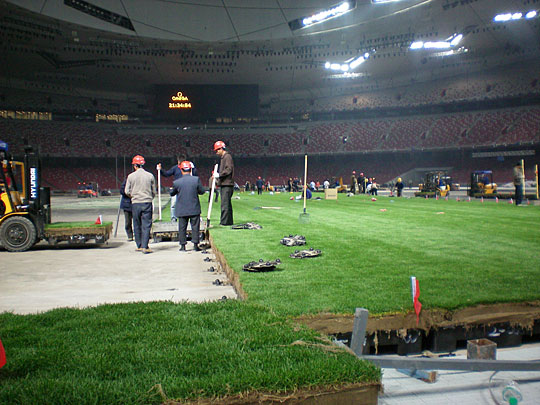 During a test move of the portable turf system, workers installed the field May 13. It was removed after a shot put competition and reinstalled after the Olympics' Aug. 8 opening ceremonies. 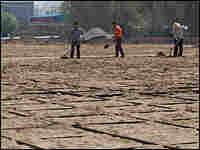 The black edges of portable plastic modules, photographed in August 2007, outline where the grass would be grown. Michigan State University hide caption 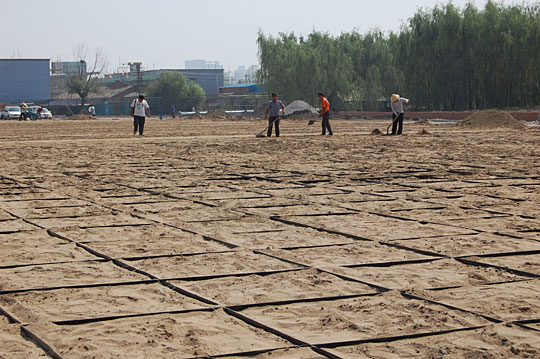 The black edges of portable plastic modules, photographed in August 2007, outline where the grass would be grown. 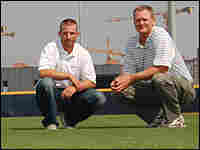 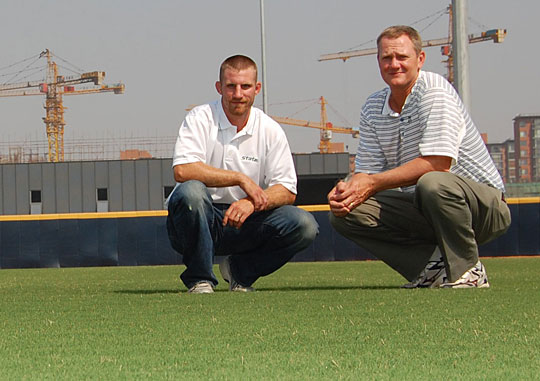 Doctoral student Alex Kowalewski (left) and professor John "Trey" Rogers, both of Michigan State University, were part of the team responsible for growing the portable grass field used in the Bird's Nest stadium.

Immediately following the opening ceremonies of the Beijing Olympics on Aug. 8, a massive transformation began. All of the equipment was moved out, and a grass field for the athletics events and the final soccer match was installed.

While a feat, removing the props and set wasn't the rough part. Finding a way to bring in a tournament-quality real-grass field was more of a challenge.

The smooth surface is actually a patchwork of more than 6,000 separate square modules of grass grown off site in Beijing, trucked in and installed before the track and field competitions began.

The technology for modular, portable fields has been around for more than 10 years. It has been used in many other high-profile venues like the Athens Olympic Stadium, the Millennium Stadium in Cardiff, Wales, and the main tennis court at Wimbledon, says Chris Scott, founder of GreenTech Inc. The company, based in Roswell, Ga., makes mobile field systems, including the one used in the Bird's Nest in Beijing.

The modular fields are built on open, flat outdoor spaces away from the stadiums. The individual modules, which Scott likened to large flower pots, are about 4 square feet on top, 1 foot deep, and are made of the same material as Tupperware and plastic milk jugs. They are filled with small stones for drainage and a layer of soil. A complete module, including the grass, weighs more than half a ton.

At the staging area, the modules are arranged in the shape of the field and planted with grass. A plastic plate between each segment prevents grass roots from growing between the modules. Scott says growing the mobile field in one single piece off site is important to help the field look more natural when it is installed in its final location.

In most cases, the field's development happens in a parking lot near the stadium.

"But in Beijing, they built a whole construction site with fencing, irrigation, lights and a shed," Scott says. "They did it as well as anyone I've seen do it. Beijing is a difficult place to grow grass."

"We understand the complexities of what to put into those modules," says Rogers, who has been a consultant on mobile grass fields since 1994, when a natural grass field was needed for the World Cup match at the indoor Pontiac Silverdome in Michigan.

"Beijing is a classic case in that there is no way grass could have survived the opening ceremonies," Rogers says, so a portable field had to be built. The off-site field was planted last September and grew under the watchful eye of one of Rogers' graduate students, Alec Kowalewski.

Rogers says the Kentucky bluegrass used on the field is no different from the grass in many American yards. Proper soil conditions, watering, fertilizing and mowing regimens kept the grass green and healthy in Beijing's climate.

With the Bird's Nest stadium cleared of opening-ceremony equipment, the labor-intensive process of moving the field inside began. Though the field segments were grown next to each other, the modules were easily lifted apart by forklift, placed onto a flatbed truck, 10 per load, and driven to the stadium, where another team assembled the field.

Rather than skimming the grass off and laying it out in the stadium like rolls of sod, the modular system allows for the turf surface, roots and plastic modules to be moved as a single 4-by-4 unit into the stadium — all 6,000 of them. They are then snapped into place on the stadium floor. Rogers says this system combines high-quality turf with the safety athletes need.

With the vast resources of the Chinese army and navy at hand for manpower and moving logistics, Scott of Green Tech says the field could be moved in and installed in about 24 hours.

During rushed installation jobs like the one in Beijing, workers start placing grass modules at the center of the field and work out toward the edges, Scott says. During a practice move a few months ago, the field was split in half so the middle segments were accessible. For the installation after the opening ceremony, the army assembled one half and the navy built the other.

Scott says the field modules were installed inside the Bird's Nest stadium in the same orientation as they were grown outdoors, and since each module is slightly wedge-shaped, adjacent sections can be pushed together to hide the seams.

After a roller is driven over the surface and the grass is cut, the seams between grass sections are nearly impossible to see.

This system was also used in Athens for the 2004 Olympic Games, but Rogers says that in Greece, security was so tight that the flatbed trucks carrying the grass modules couldn't enter the stadium as they did in Beijing. In Athens, officials constructed a long conveyor system with forklifts on each end to transport the modules from the trucks outside the stadium to the field inside.