Accessibility links
Some Economies Suffer As Beijing Cleans Up Air In an effort to curb air pollution for the Olympics, more than 250 factories in Beijing and nearby towns like Tangshan have been shuttered temporarily. Some factory workers are on vacation for the first time in 20 years.

Listen
Some Economies Suffer As Beijing Cleans Up Air 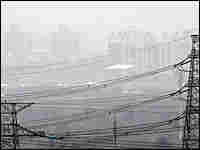 Smog hangs over Beijing despite efforts to reduce pollution ahead of the Olympics. Philippe Huguen/AFP/Getty Images hide caption 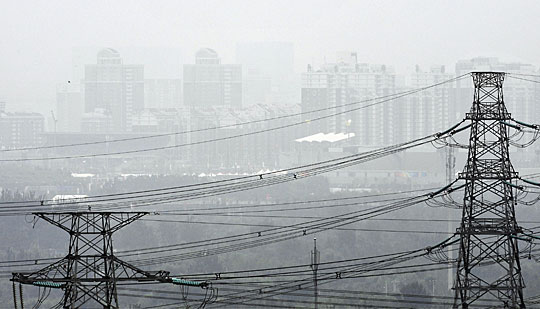 Smog hangs over Beijing despite efforts to reduce pollution ahead of the Olympics.

Despite the continuing haze, Beijing's air is the cleanest it has been in 10 years.

But the massive cleanup effort for the Olympic Games has come at a cost to the local economy of some nearby industrial cities, whose factories have been forced to close down temporarily.

The roar of industry in one of these towns, Tangshan, has quieted to a hum recently. Just 90 miles from Beijing, 267 factories have been closed down for the Olympics. They are mainly big polluters like steelworks, cement plants and power generators. Some have been closed since the beginning of July, while others shut their doors just recently.

One sleepy village houses workers from a major steelworks. Some of the factory's 4,000 employees are still working, but many others are at home, on enforced "holidays."

"We're getting three dollars a day while the factory's shut," one worker says. He won't give his name because he doesn't want to jeopardize his job. "It's a third of what we normally earn. Some of my co-workers are finding it hard to get by. Others clearly don't mind the downtime."

Gao Yushan is one of those who doesn't mind the time off.

"I haven't had a holiday for 20 years," Gao says. "It's just beautiful to be able to watch the Olympics and take a break."

Gao is on the front lines of the conflict between economic development and the environment. As his experience shows, making money has been the priority until now.

China's economy has grown 5,000 percent over the past 27 years, and that has happened at the expense of the environment. The World Bank has said China has 16 of the world's 20 most polluted cities.

"It's so much cleaner," says the owner of a car repair shop, who gives her name as Mrs. Sun, as she looks up at the bleak gray sky. "Normally we have so, so many big trucks on this road, but now there are far fewer."

"The Olympic Games are no good for business," says a local mechanic named Mr. Wang. Polluting factories have been closed down, trucks have been forbidden to drive on the roads, raw materials can't be brought in, and goods can't be carried out. So, factories simply can't operate — and workers in Tangshan are very depressed.

Locals say many of these factories were having a hard time anyway. With the price of raw materials going up, some were even selling goods at a loss.

Officials are now promising new measures to improve Beijing's air quality even after the Olympics.

None of the resting workers yet know when they'll be going back to work, and some are now beginning to worry that their livelihoods may be sacrificed in China's bid to clean up its environment before it is too late.