Accessibility links
Jamaica's Bolt Breaks 200M Record Jamaica's Usain Bolt broke the world record by winning the 200 meters in 19.30 seconds. He is the first man since Carl Lewis in 1984 to win both the 100- and 200-meter events at an Olympics. He is also the first man to break the world marks in both events. 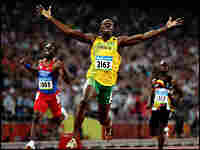 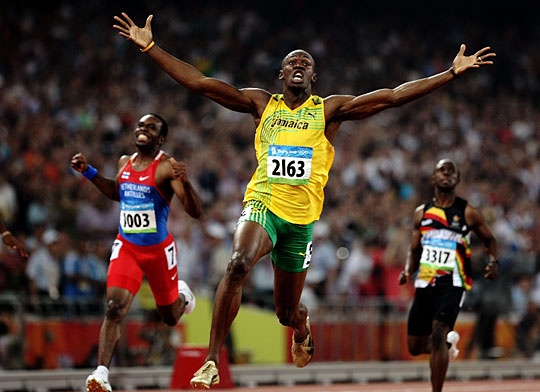 Michael Phelps step aside? Never. But after Usain Bolt's stunning gold medal victory in the men's 200 meters Wednesday, perhaps it is fair to ask: "Michael, could you please make some room up on stage?"

At the very least, the Beijing Olympics found its Week 2 remedy for the post-Phelps hangover.

The 200 meters is Bolt's favorite race, and in contrast to his antics at the end of the 100, he took the 200 very seriously. Bolt grabbed the lead at the top of the straightaway and simply blew away the competition.

But this time, there was no pounding his chest, no looking around. Bolt kept his focus straight ahead, gritted his teeth and leaned at the finish line. When he glanced to his left and saw his world record time, Bolt spread his arms — a look of wide-eyed ecstasy on his face.

Track and field came into the Olympics battered by doping scandals in recent years. NBC even made the pre-games decision not to show much of track and field in prime time. But in a span of five days and two dazzling races, Bolt energized his sport and gave it a true star.

That leaves two questions: Will Bolt be able to avoid the doping taint of past Olympic sprint champions? And will those who govern track at the elite level be able to capitalize on the newfound fame of the man who has dubbed himself "Lightning Bolt"?