Accessibility links
Banner Day For U.S. Women's Teams In Beijing Day 13 brings the U.S. softball team's gold-medal game and important contests for American women in soccer, volleyball and water polo. But it isn't all good news: The softball team, aiming for its fourth straight Olympic gold medal, had to settle for silver after an upset loss to Japan.

Day 13 brings the U.S. softball team's gold-medal game and important contests for American women in soccer, volleyball and water polo. But it isn't all good news: The softball team, aiming for its fourth straight Olympic gold medal, had to settle for silver after an upset loss to Japan.

The US Women's softball team was aiming for a fourth straight gold medal at the Beijing Olympics, and today they had to settle for silver, instead. Japan beat them three to one. NPR's Tom Goldman is in Beijing and covering this story. And Tom, Tom, Tom, Tom. A few hours ago, you told us that this was the New York Yankees of softball. What happened?

TOM GOLDMAN: Well, they kind of are the New York Yankees, who haven't won a World Series for a long time.

GOLDMAN: Big sorry, New York. A big, big shocker, here. These guys were overwhelming favorites, having won all three of the Olympic competitions since softball started in the Olympic Games in 1996. They came into this game, having outscored their opponents in Beijing 57 runs to two. They were undefeated. I mean, how could this happen? No one really knows. But Japan just jumped all over, and they got the timely hits when they had to. Their pitcher Yukiko Ueno was just dominant, and she got herself out of a couple of real tough jams, where the US loaded the bases with runners, with one out that they couldn't squeeze over a run in those situations. It was due, in large part, to Ueno.

GOLDMAN: Right you are. That's the sad thing, here. Softball is off the program in 2012. The IOC voted in 2005 to kick softball out. One of the reasons that people say why that happened is because of the US dominance. Well, I guess that's not the case anymore. Unfortunately, for the Americans, they did their best to show that this is, indeed, a world game.

INSKEEP: Well, let's talk a little bit more about some other women's sports. I'm following the instructions of our friends here at the New York Times, who are live blogging the gold medal soccer. US: zero, Brazil: zero. What's happening there?

GOLDMAN: It's a thriller. Nil, nil, as they say here. But I guess in America, we say zero, zero. About 10 minutes left in regulation, a hard-fought game, no scores yet. This is a real grudge match between these two teams. Brazil beat the US in the World Cup last year four to nothing. That was a real bitter defeat for the US. And Brazil wants to avenge its loss to the US in the last Olympic finals. So they're down to the last 10 minutes of regulation, then we may go to some overtime and crazy penalty kicks.

INSKEEP: Tom Goldman in Beijing, I want to ask about another women's sport, if I might. I can't remember any time that I've ever seen so much women's volleyball on TV.

GOLDMAN: It's a tremendous amount. And we saw a lot today in - we had both beach volleyball and indoor volleyball going on, and it was pretty successful for the US. The beach volleyball juggernaut of Misty May-Treanor and Kerry Walsh won their second straight gold medal against a Chinese duo. And they've been just unbeatable, really. And then indoors, they US women's volleyball team got revenge against a Cuban team that beat the Americans earlier in the games, and America is in its first gold medal game since 1984.

INSKEEP: I suppose we should mention, for those who haven't seen any of these volleyball matches, especially the indoor, it's brutal. This is fierce competition.

GOLDMAN: It really is. It's a really exciting game, and it's too bad that it doesn't get more play in the US. You know, we have to see it basically once every four years. It's a brutal game. It's very athletic. People are flying above the net, spiking the ball. It's great fun.

INSKEEP: Tom, we've just got a couple of seconds left, here, but I do want do mention we do get letters from people saying why are spoiling it for me by saying the results of the soccer match, for example, before I get to see it on TV?

GOLDMAN: Here's a suggestion: Send those angry letters to NBC, which tape-delays the action and shows it in primetime and creates this impression among viewers that the Olympics are a primetime event. It's not. It happens all day long. We cover it in real time. Sorry.

INSKEEP: Okay. The latest news, live, from NPR's Tom Goldman in Beijing. Tom, good to talk with you, as always. And, again, the women's softball team lost out on the gold today. This is NPR News. 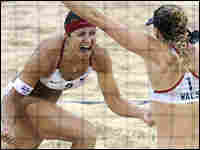 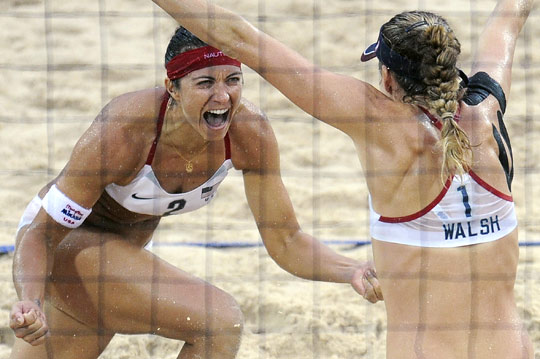 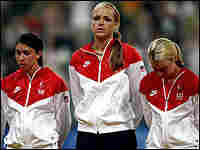 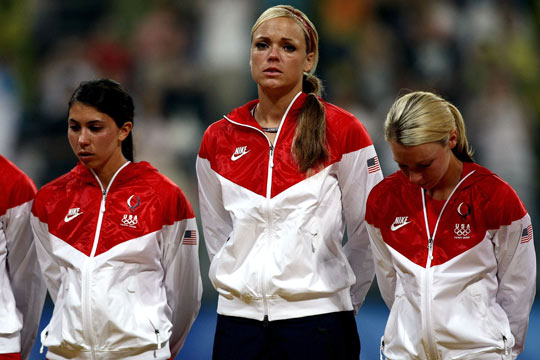 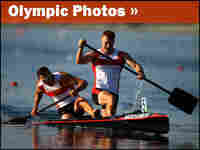