Accessibility links
In Atlanta, Inner-City Is The New In Crowd Youth Radio's Alix Black says she was made fun of for growing up in downtown Atlanta, Georgia. But now hip suburbanites are relocating to her former inner-city neighborhood.

Listen
In Atlanta, Inner-City Is The New In Crowd

Youth Radio's Alix Black says she was made fun of for growing up in downtown Atlanta, Georgia. But now hip suburbanites are relocating to her former inner-city neighborhood. 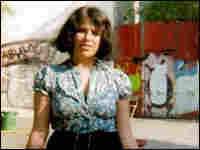 Wyhen Alix Black was growing up in Atlanta, it was a very different place. Courtesy Youth Radio hide caption

What's The New What? It's Day to Day's series from Youth Radio. These are pieces about life and living. This one is set in the South, in Atlanta, Georgia, which is hip again as a place to be young. And that's big for a city that has always bragged more about its suburbs. Alix Black brings us the story of what this means for teens' social lives.

ALIX BLACK: What's The New What? Inner city's the new in-crowd. And I know that sounds obvious, but not in Atlanta. Here, it's finally cool to live downtown. You want proof? I called out to the suburbs to talk to my friend, Mattie Davis (ph).

Ms. MATTIE DAVIS (Friend): Yeah, I'd say that the suburbs are definitely less cool now that downtown is more cool.

BLACK: And I didn't even tell her to say that. You know, people used to make fun of kids like me growing up close to the inner city. It was considered dangerous, not cool like the suburbs, where all the malls were. The hip spot was Buckhead, which was miles from the city center.

(Soundbite of song "Hey Ya")

BLACK: Andre 3000 is a perfect example of ice-cold suburban cool in Atlanta. Known for his preppie outfits, he went to middle school in the suburbs before moving to a more urban area, and that's when he became part of the duo Outkast. I wonder if Andre and his partner, Big Boi, felt like I did in high school, an outcast living in the inner city.

BLACK: If you want to know how all this happened, the 96 Olympics marked the beginning of the shift to downtown's popularity. And now, suburbanites are not only willing to visit the inner city but actually to live there. With new downtown developments, they can have the best of both worlds.

Mr. JESSE BEDLONG (Downtown Atlanta Resident): When you go in town, you know, you're closer to people. There's, you know, more sense of social connections.

BLACK: That's my friend, Jesse Bedlong (ph). He's the perfect example of the growing coolness of the inner-city. He moved in-town with his family from the suburbs when he was in high school.

Mr. BEDLONG: My neighborhood, it was developed as the new mixed use, you know, live, work, play lifestyle center.

BLACK: Jesse lives in essentially an outdoor mall complex in downtown Atlanta, part of a growing trend of developments bringing suburban style into the inner city. This lifestyle center is nothing like the sprawling area where Jesse lived before.

He attended one of the biggest high schools in Georgia, built to accommodate 1970s suburban growth and popularity. In a sign of the times, moving in-town just may have made Jesse cooler. I called up Soccero Stevens (ph), one of his old friends from the suburbs.

Ms. SOCCERO STEVENS (Friend): Before Jesse moved to the city, I would say that he was not the most popular person I've ever met in my life. He usually came like urban, like the way he dressed, like everything was different. He was just more laid back and relaxed.

BLACK: I get a little wistful for the familiar neighborhoods I grew up with. The quirky old architecture is being replaced by developments that are almost urban-Disney. But it's nice to finally see a downtown Atlanta that's vibrant instead of deserted. And I love the fact that suburban teens who might have teased me years ago are probably now wishing they were inner-city teens, Atlanta's new in-crowd.

(Soundbite of song "Welcome to Atlanta")

LUDACRIS: (singing) Welcome to Atlanta where the play is played, where we ride on the...

Video: How To Know If Your Inner-City Is Becoming Hip