Accessibility links
Bon Iver: Songs From A 'Good Winter' Two years ago, things weren't going well for Bon Iver's Justin Vernon. So he holed up in a cabin in the snowy Wisconsin northwoods, only to emerge with an album celebrated across the indie music community. Here, Vernon shares his story and performs in the studio. 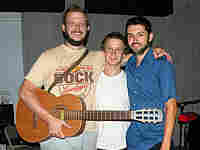 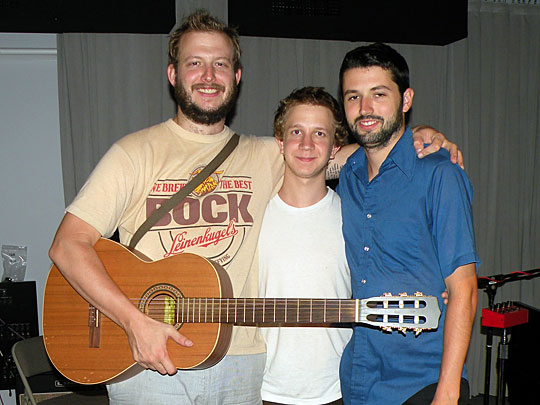 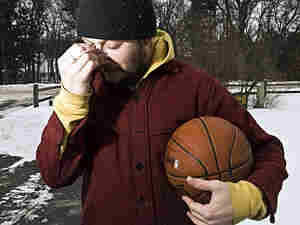 Justin Vernon, who records under the name Bon Iver, says that his music is informed by the Wisconsin winter. Drew Kieser hide caption

Two years ago, things weren't going so well for a guy from Eau Claire, Wis., named Justin Vernon. He'd lost his band, his girlfriend and maybe even some of his wits. Retreating to an isolated cabin in Wisconsin's northwoods wasn't such an outrageous choice.

What was unusual was that Vernon spent two very cold winter months there, writing and recording a set of heartbreaking songs. Two years later, things are better for Justin Vernon: He's released those cabin songs under the name Bon Iver, and the album For Emma, Forever Ago is a critical and commercial hit in the indie world.

He recently visited WNYC's Soundcheck to perform a few songs in the studio and tell host John Schaefer about why he went back up north.

"I actually didn't think much at all," Vernon says. "I think that I just — I went there because there was only one place to really go ... and live for free and kind of be out of everyone's hair, and give myself the time and space I really needed."

Vernon didn't intend to write a successful album's worth of music, he says. He just needed some time by himself.

"It felt good to sort of attack some demons," Vernon says. "You know, everyone kind of builds up negative energy in their life, and for me, it just built up a little too long. And I think I went up there to really fix myself. That's what it was kind of about for me — afterwards, I realized that."

After his two months, he got a touring gig playing guitar with the North Carolina band The Rosebuds. It was only then when Vernon realized that he might have something.

Bon Iver is an intentional misspelling of Bon Hiver, French for "good winter." Vernon says that the name is intended to conjure up the "winter culture" which helped produce the project.

"It's more of a sentiment that I'm trying to attach to what we do musically, as a group and as a project," he says. "That sentiment being one of, I don't know, geographical reference. And us being from where we come from, I think that's who we are. And we are who we are because of where we come from."

Though he "erected" the album in Northern Wisconsin, the next step was to figure out how to play it live. So he called upon drummer Sean Carey and guitarist Mike Noyce — nonchalantly, as he recalls.

"And then I called Mike. Mikey was my guitar student when he was in high school and I was in college. And I called him up and I told him to drop out [of college], and he came along."

"No, they caught on," Vernon says. "When they heard us on NPR, they were pretty jazzed about it or whatever. I think they were like, 'Oh, this is the real deal.'"

Love Among The Cheeseheads

Vernon says there is, in fact, an "Emma" behind For Emma, Forever Ago. Though they broke up several years ago, she and Vernon remain close friends.

"It's not a record just about your first love, but it's about what happens to you in the years following that," he says. "And that's what this record is about, is me kind of trudging through those years and finding myself in darker places than I wanted to be, and all that."

Two years after his wintry sojourn, Vernon still resides in Eau Claire, in Northwestern Wisconsin, while not on tour. He says he still prefers living there to somewhere more convenient for making publicity appearances.

"And when we're done, we go home," he says. "And it's very, very in between the coasts. And it feels good."