Accessibility links
U.S. Softball Team Fouls Out In Gold Medal Match The U.S. women's softball team lost 3-1 to Japan in the gold medal match, which they were widely favored to win. The U.S. women's soccer team won 1-0 against rival Brazil. 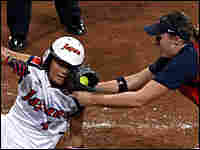 Japan's Masumi Mishina is tagged out at by Monica Abbott during the women's gold medal softball game at the Fengtai Softball Field on Thursday. Jonathan Ferrey/Getty Images hide caption 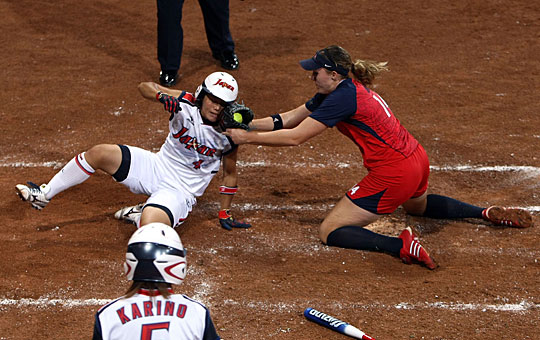 Japan's Masumi Mishina is tagged out at by Monica Abbott during the women's gold medal softball game at the Fengtai Softball Field on Thursday. 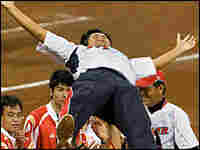 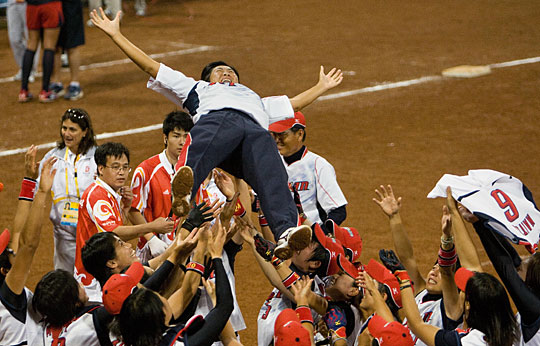 Japanese players lift their coach, Haruka Saito, in celebration after winning the gold medal match against the U.S. on Thursday. 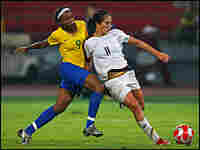 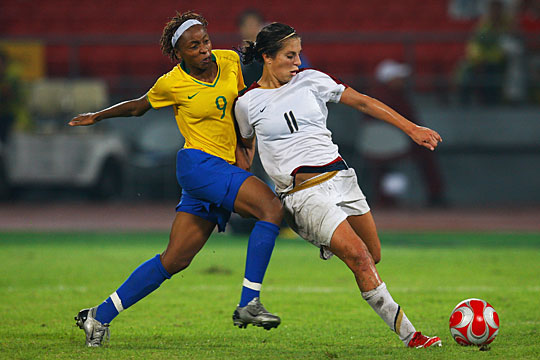 American Carli Lloyd (right) holds off the challenge from Ester of Brazil during the women's gold medal match Thursday.

Two of America's best-known women's Olympic teams played for gold medals Thursday in Beijing. When the matches were over, there was a U.S. celebration on the soccer field and shock on the softball diamond.

The problem with winning every one of your Olympic softball games since September of 2000, is that people tend to assume it will continue forever. Certainly the U.S. team did nothing to discourage that line of thought as they headed into the gold medal game against Japan undefeated, having outscored their opponents 57-2.

Were they favorites? How about just awarding the gold medals before the final game, then playing just because the nice people in the stands showed up to watch?

In the bottom of the 7th inning, American Caitlin Lowe slapped a ground ball to third base and got thrown out at first; Goliath fell. The final score: Japan 3, U.S. 1.

"The bottom line is, they played better ball than we did today," Nuveman said. "We made some errors at the end as well, and they deserved to win."

Nuveman's infield fly out in the bottom of the 6th inning, with the bases loaded, was just one of the blown chances by the U.S.

Uncharacteristically, the Americans failed to hit when they had to, had defensive lapses and were out-pitched by the Japanese iron woman, Yukiko Ueno. The day before the final, Ueno pitched 21 innings — three complete games — to help Japan qualify for the final. Then, in the gold medal game, she shut down the U.S., except for a 4th inning home run by power hitter and plain talker Crystl Bustos.

"She threw good," Bustos said. "I don't [know] what happened. I'm not every hitter, so — I know at the plate we struggled, our pitching wasn't on point like it used to be. But — you know what, we came out here and gave it everything we had left."

There was a strange undercurrent to the game, possibly because it was the last Olympic softball game. In 2005, the International Olympic Committee decided to leave softball off the program, starting with the next summer games in 2012.

It is said that one of the reasons for softball's expulsion was U.S. dominance — Americans had won every Olympic softball competition since the sport was first played at the 1996 games. Still, the U.S. kept insisting there were other really good teams out there.

"I really kind of feel people will get off our back and realize there is some parity in this game," Candrea said, "[because] I've always felt that the rest of the world is getting better."

It is not clear whether that's enough to convince the IOC to reinstate softball for 2016. At least five U.S. players won't wait around to find out: After the game, they walked to home plate and placed their cleats in the dirt — a symbol of their careers being over, and perhaps Olympic softball, too.

This win was the second straight Olympic gold medal win for the U.S., which won the tournament without its injured star forward Abby Wambach.