Warning: getimagesize(https://media.npr.org/politics/politicaljunkie/2005/jan/daley-c6750274bb6c66b98c25965f904f3c05a46fccd7.jpg): failed to open stream: HTTP request failed! HTTP/1.0 404 Not Found in /var/www/html/src/Views/CommonJsonldView.php on line 87
 Daley May Outlast Father As Chicago Mayor : NPR
Accessibility links
Daley May Outlast Father As Chicago Mayor The lessons Richard M. Daley learned from his father's missteps during the chaos of the 1968 Democratic Convention helped him claim — and hold — the seat behind the Chicago mayor's desk where his father served for 21 years. 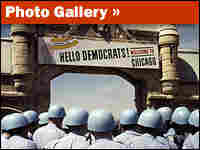 Richard J. Daley (right) served for 21 years before he died in 1976. His son has held the seat for 19 years. hide caption

Vietnam War protesters clashed with police on the streets and in the parks of Chicago during the 1968 Democratic National Convention. The violent crackdown on the Chicago demonstrators marred the convention and may have cost the Democrats the election that year.

But in order to sit behind the desk on the fifth floor of Chicago's City Hall where he's served for 19 years, Richard M. Daley had to take a much different path.

The younger Daley has always argued that what happened on the streets of Chicago those steamy nights 40 years ago was not really his father's fault.

In late August 1968, the nation was still reeling from the assassinations of the Rev. Martin Luther King Jr. and Robert Kennedy. There was a cultural clash between young activists who wanted the party to be more progressive and inclusive, and the old-guard bosses, like Richard J. Daley, who cut deals behind closed doors and maintained tight, iron-fisted control.

Democrats came to Chicago for the convention as a party deeply divided over the Vietnam War and civil rights.

"There were plenty of warnings for anyone who was listening that there was going to be confrontation in the streets of Chicago," says Bob Crawford, retired political editor of Chicago news radio station WBBM-AM. "The only question was how was it going to be handled and what would the ultimate outcome of it be."

By most accounts, the elder Daley handled the situation poorly.

At the time, Richard J. Daley was the most powerful big city, Democratic machine boss in the country. He was known as a kingmaker after delivering critical votes that helped put John F. Kennedy in the White House. Daley had the president's ear just about any time he wanted, and hosting the convention was his way of flexing his party muscle.

As the city geared up for the convention, he wasn't going to let any long-haired, vulgar demonstrators ruin the party.

"He was the last of the big city bosses," said Ed Burke, alderman of Chicago's 14th Ward since 1969, when he was elected as an ally of Richard J. Daley. "He had a great pride in Chicago. He had a great love for the city. Throw into that a good measure of his Irish temper and you had a volatile mix."

In 1968, Burke was a Chicago police officer assigned to the International Amphitheater for the convention. He was on the floor, just a few feet behind the mayor and his sons when television images of the violent clashes between demonstrators and Chicago's police force were being broadcast. The footage led Sen. Abraham Ribicoff (D-CT), to alter his speech nominating George McGovern for president to denounce what he called "Gestapo tactics in the streets of Chicago."

"Ribicoff stared down at Daley, looked him in the eye," Burke says. "It was a direct insult to Daley."

The mayor tried to defend himself, his city and his police force.

But the sounds and pictures of the events told a different story: Daley's machine overreacted. An inquiry after the convention labeled it a police riot.

After the dust settled, Daley's influence in the party nationally started to wane.

"The '68 convention left such a bad taste in the mouths of Democrats all across the country that even party regulars were blaming Richard J. Daley for the fate of the party, losing the election in '68," Crawford says.

By 1972, reformers in the party were able to change the rules for selecting delegates to the nominating convention and Daley's delegation to Miami was thrown out.

"But here at home, Mayor Daley was a hero," Crawford says. "Chicagoans thought the way he handled those demonstrations was the way it ought to be handled."

"As a result of the convention in 1968, Richard J. Daley could never be defeated in the city of Chicago," Alderman Burke says. "The people of Chicago admired him for being a strong leader."

Daley easily won re-election in landslides in 1971 and 1975. He maintained firm control over Chicago's City Council, where he never lost a vote and never needed to use his veto — lessons his son Richard M. Daley took note of.

During that infamous scene on the floor of the convention hall when Ribicoff criticized the mayor, the younger Daley was screaming back at Ribicoff right alongside his father.

"He saw chaos and he saw his dad lose control," which for a Daley is everything, says Roosevelt University's Paul Green.

"I think he may have learned at that time that power is everything and weakness is nothing," says Crawford.

While serving in the Illinois Senate, Richard M. Daley felt the sting and betrayal of some city ward bosses who turned their back on him in the power struggles that followed his father's death in 1976.

Although the younger Daley won election as Cook County State's Attorney in 1980, he lost a bid for his dad's old job in 1983 when he challenged Mayor Jane Byrne. The two split the white vote, enabling a new coalition of independent blacks, Latinos and liberals to elect Chicago's first black mayor, Harold Washington.

With all of the elements of the old machine falling apart, Daley had to start building a new machine all his own.

"He came to the conclusion very early on that he had to change with the times or that he was doomed to failure," says Burke, who was a leader in the anti-Harold Washington block on the City Council in the 1980s and who supported Byrne over Daley in 1983.

"And he made a very conscious effort to avoid the mistakes that older political bosses in Chicago had made," he says.

When Washington died in 1987, his coalition split, creating the opening for Daley in a special election to finish Washington's term in 1989. He pulled together the remaining white ethnic machine bosses, Hispanics and white liberals, including a growing and politically viable gay community, to start a new mini-machine.

"That coalition has never wavered in their support for Richard M. Daley, not once," says Green. "And he's added to that the growing support in the black community [and] the other new communities like the Asian community. You win elections by addition and he has been very good at that."

Daley did not seek to be chairman of the Cook County Democratic Party, a position his father used to control politics and government from the courts to the state capitol to Congress. His father's machine doled out lower level offices, jobs and political favors in exchange for loyalty. The younger Daley's machine rewards loyalty, too, often with jobs and favors — his last patronage chief, Robert Sorich, is now in a federal prison after being convicted last year on corruption charges — but this Daley keeps a further distance from the inner workings of his machine.

He garnered the support of Chicago's business community, using pinstripe patronage — government contracts — to amass millions in campaign contributions, making the foot soldiers of the old machine less important. He has also surrounded himself with brilliant young minds, both on politics and urban policies, invested heavily in public works, building new parks, schools, libraries and police and fire stations in the neighborhoods, while at the same time, sparking a new building boom of skyscrapers downtown and along the lakefront.

In order to get done what he wants, this Daley operates just as autocratically as his father.

He has complete control of the City Council, he squashes and sometimes ridicules dissenters, and he leans heavily on the private sector. As a result, the city looks better, city services operate smoothly and Chicago has retained a vibrant middle class.

"There's a lot to be said for the progress of the city. It's important for tax revenues; it's important to make the city livable," says Crawford. "How would I sum up their leadership? Call them great mayors, but remember the price. The price is corruption."

Richard M. Daley is admired by mayors around the country for his innovation in managing cities and coming up with new ways to tackle old urban ills such as failing schools, affordable housing and cleaning up the environment.

His longevity in office, 19 years and counting, has helped him forge important relationships in Washington, where his influence has been helped by his brother Bill, who was Commerce secretary under President Bill Clinton, campaign manager for Al Gore and is now a key adviser to presidential hopeful Barack Obama.

While he may not yet be as powerful nationally as his father was at the height of his reign in Chicago, Daley's stature on the national political scene stands to rival that of his father, should Obama win the White House in November.