Accessibility links
HHS Backs Protections For Anti-Abortion Doctors The Bush administration has proposed a rule that would strengthen protection for health care professionals who refuse to take part in abortions for moral or religious reasons. 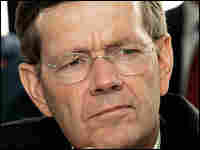 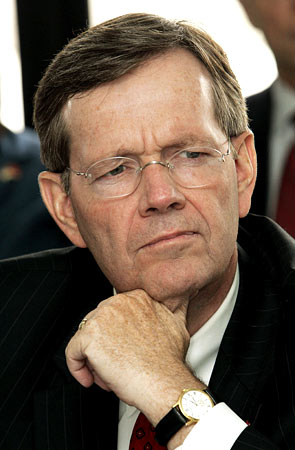 Health and Human Services Secretary Mike Leavitt, pictured in a file photo, defended the regulation, saying "Freedom of expression and action are unfit barter for admission to medical employment or training."

The Proposed HHS Regulation (PDF)
HHS Statement On The Regulation

The Bush administration wants to strengthen protection for health care professionals who refuse to be involved with abortions. It has proposed a rule that would make it easier for them to refuse to take part for moral or religious reasons.

There are already federal laws that protect those medical professionals. The new rule would bolster those laws and require doctors and hospitals that take federal funding to certify that their employees can opt out of performing abortions.

Leavitt said the rule also will make it easier for health care professionals who feel they face retaliation to file a complaint.

"Freedom of expression and action are unfit barter for admission to medical employment or training," Leavitt said.

Leavitt said the proposed rule dropped controversial language that existed in an earlier draft. Critics said that earlier wording would have defined some common methods of birth control as abortion and would have allowed pharmacists and health care providers to refuse to supply emergency contraception.

Roger Evans of the Planned Parenthood Federation of America says the proposed rule is too vague and could expand what constitutes a moral objection to providing treatment.

"By leaving the term 'abortion' undefined, the regulations create all sort of space for ideology and political views to insinuate themselves into medical practices, emergency rooms and clinics all across the country. And when that happens, women will suffer," Evans said.

One concern is that doctors would deny treatment to lesbians and gays. Just this week, the California Supreme Court ruled against two fertility doctors who invoked religious belief as a reason to refuse to provide artificial insemination to lesbian patients.

But the new rule was praised by groups who say medical professionals who do oppose abortion have little protection to follow their moral beliefs.

Deirdre McQuade, with the U.S. Conference of Catholic Bishops, said some have left medical specialties where they care for women and children — and better protection could reverse that.

"In a field where we're already losing a disproportionate number of doctors, this would enable them not only to stay, but also maybe to recruit more doctors who are highly qualified and can provide quality care to their patients," McQuade said.

The Bush administration is under time pressure to get the rules finalized, with the end of the administration five months away. There is now a 30-day public comment period before the rule can be final.