Accessibility links
Pingpong: A Chinese Obsession When Americans play pingpong, it just isn't that big a deal. In China, however, table tennis is a national craze — and fans treat top players like rock stars.

When Americans play pingpong, it just isn't that big a deal. In China, however, table tennis is a national craze — and fans treat top players like rock stars.

If you asked Americans to rank the most important sports to them, table tennis might come in somewhere a little above foosball or bumper pool. But in China this is a national craze, and rabid fans treat top players like stars. NPR's Frank Langfitt reports.

FRANK LANGFITT: Six thousand fans have packed the gymnasium at Beijing University. They're chanting, "Go Ma Lin," cheering on one of China's top ping pong players. All eyes are focused on a field of play that is just five by nine feet. But the action on the table is intense. Ma Lin's smashing forehands push his opponent ten feet off the back of the table. And when Ma wins a point, he raises a fist to the crowd.

LANGFITT: This is the gold medal round for men's team competition, China versus Germany. Between matches, the announcer leads fans in a cheer.

LANGFITT: When I say the name of the team, everyone say go, okay? Chinese team, go, German team, go. Even with the Chinese fans ordered to cheer for Germany as well, it's not enough.

Unidentified Man #2: Please stand for the national anthem of People's Republic of China.

LANGFITT: Chu Ungshe(ph) has been watching the game from the second row, but as the stands empty, he won't leave. He leans over a barrier snapping photos of players as they file out through the tunnel. Chu and his wife, Hu Dung Lee(ph), have played ping pong since they were kids in the 1960s. She explains the game's attraction simply.

LANGFITT: Finally, a security guard has to usher them out.

LANGFITT: I'm now on the other side of town and a world away from the Beijing University gymnasium. I'm standing out in front of the Rising Dragon's Table Tennis Club. It's one of about several dozen clubs here in the city that teach kids three to four hours a day how to play ping pong, and it's located in the basement of an apartment building here on the south side of town.

LANGFITT: The school is a warren of underground rooms filled with ping pong tables. Coach Lu Jung Yong(ph) scoops balls from a plastic wash basin and fires them at his pupils.

Mr. YONG: (Through translator) From physical size to reaction time to dexterity, I think table tennis is a more suitable sport for Asians.

LANGFITT: The children here are as young as seven. After lunch and a nap, they gather around the TV to watch China in the men's singles competition. Again, China is represented by Ma Lin. Seven-year-old Shin Drew Yong(ph) likes what he sees.

LANGFITT: When I was younger, the table was this high, he says, putting his hand over his head. Shin says his mom, a beer factory worker, introduced him to ping pong.

LANGFITT: When there's a competition, my mom lets me watch, he says. And my mom told me, you have to smash the ball, and if you don't, then you'll give other people chances to win the point. Shin is just a hair over four feet.

What's your dream? I ask.

LANGFITT: My dream, he says, is to be world champion. After half an hour of watching ping pong, the TV goes off. Shin and the other kids return to the tables for two more hours of practice, following their dreams in China's national sport, one shot at a time. 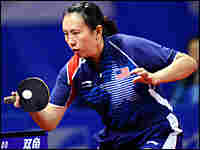 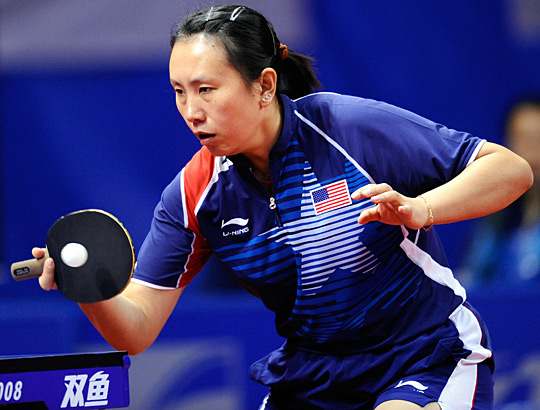 For all four members of the U.S. table tennis team, the Beijing Olympics will be like going home. Each was born in China, including the team's top female player, Gao Jun.

Whether at home or abroad, the Chinese dominate the game many call pingpong.

But the global federation that oversees the sport is trying to create more competition.

At 39, Gao is old by athletic standards. A few years ago, she thought about retiring, but then China won its bid to host the 2008 Summer Olympics in Beijing.

"Olympics in Beijing — that's going to be a lot of fun," Gao says. "I think, maybe I can play and maybe I can go."

Gao used to play for China and won a silver medal at the 1992 Olympics in Barcelona. She moved to the United States to get married but says playing pingpong in the States is frustrating.

In China, pingpong is a serious sport and even watched on television. But in the U.S., it's more likely to be played in a basement.

Gao says the U.S. competition is so poor she has to spend most of the year in Shanghai to keep her skills up.

Her game looks nothing like the one you see in American recreation rooms.

Warming up with an opponent near her former home in Maryland, her sneakers squeak as she slides back and forth across the floor and she flicks her paddle, firing the ball at speeds of up to 70 mph.

As Gao plans to return to the Olympics for a fourth time, some younger players think she has competed at the event enough. Unable to make the Chinese national team, some older Chinese players often go abroad, where they dominate the teams of other countries.

Chen Weixing did this and now plays for Austria. He teaches the game at a pingpong center outside Washington, D.C. A student — 16-year-old Amaresh Sahu — admires Chinese-born players, but also resents them.

"I think it's good for us to see their styles. But I think for them to take up so many spots again and again, [denying spots to] the talented players here ... is just wrong," Sahu says. "And you don't know if they're really playing for us, or they just want to go play."

The International Table Tennis Federation wants to make it easier for people like Sahu to compete. Earlier this year, it made a new rule that foreign players must live in their adopted country for a period of time before they can compete for their new nation overseas.

But the rule doesn't apply to the Olympics, and it isn't retroactive.