Accessibility links
Oil Expansion Plans In L.A. Rile Residents Oil fields aren't new in Los Angeles. But with the price of crude beyond $100 a barrel, it is cost-effective to start drilling there again, in both old and new wells. And that has made some residents very unhappy. Last year, Los Angeles County had 3,400 wells in operation. 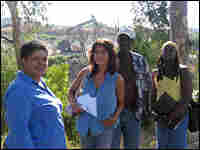 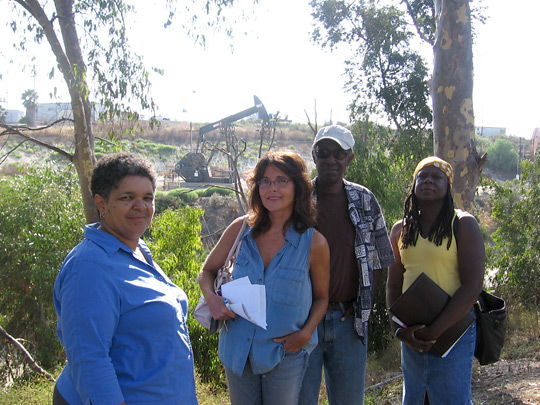 Calling For A Halt: Community activists stand in front of an oil field in Los Angeles. 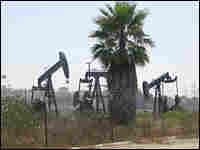 Mideast L.A.?: In urban Los Angeles, pump jacks bob up and down, sucking oil out of the ground. Mandalit del Barco/NPR hide caption 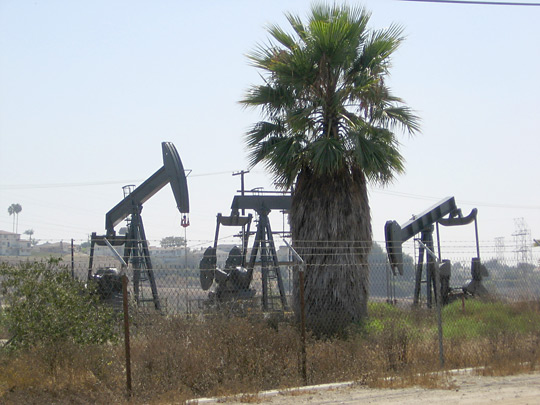 Mideast L.A.?: In urban Los Angeles, pump jacks bob up and down, sucking oil out of the ground.

Oil fields aren't new in Los Angeles. But with the price of crude beyond $100 a barrel, it is cost-effective to start drilling there again, in both old and new wells. And that has made some residents very unhappy.

"What we have is a world class oil field sitting below a world class city," said John Martini, manager of governmental affairs for Plains Exploration and Production Co., or PXP. The Texas oil company does extensive work in the Inglewood oil fields.

Now, the company is seeking government approval to tap as many as 50 new or existing wells a year for the next 20 years.

Last year, Los Angeles County had 3,400 wells in operation. As the price of oil climbs, speculators are interested in drilling new wells and tapping old ones throughout the area.

Iraj Ershaghi, director of petroleum engineering at the University of Southern California, says only about a third of Los Angeles' available oil has been recovered. And new drilling technology can change that.

Ershaghi says the Los Angeles Basin is one of the richest oil regions in the world. Before the urban sprawl, drilling rugs dotted the landscape. Even today, Ershaghi says, there are active oil wells in some unlikely locations.

"If you go to Beverly Hills High school, you see an oil well right on the campus," Ershaghi said. "If you go to Century City, you see that beautifully decorated rig, that they put flowers around that so it matches the building. That's a very unusual place."

But many of the city's oil operations have been controversial. In 2003, 12 former students at Beverly Hills High sued a collection of oil companies, claiming that drilling on campus had caused cancer and other diseases.

A lower court dismissed the case for lack of evidence, but the ex-students have appealed. Now, people living near the Inglewood oil fields are protesting PXP's plan to increase production.

Lark Galloway Gilliam lives down the hill from the Inglewood oil field. As executive director of Community Health Councils, she and hundreds of residents are asking for more environmental reviews and safeguards before PXP gets the green light to expand to as many as 1,000 new wells.

"My mother, I grew up here, and she died at a very early age to cancer. I saw another four people on my block die of cancer, and of course we'll never know. And of course, the science is not there to make a link between what's happening in this field and cancer, but you wonder."

Two years ago, residents in nearby Culver City evacuated their homes one night after a mysterious gas leak, prompting PXP to voluntarily shut down its operations until the county finishes an environmental review.

"What were saying is, look, we need to operate harmoniously with our neighbors and we're willing to subject ourselves to more regulations, whether we like it or whether we agree with it or not," PXP Vice President Steve Rausch said. "So pass it. Let's go!"

But that doesn't go over well with residents who've been packing public hearings — even those who get monthly checks for oil pulled from their property, people like Bernard Rollins.

"I'm one of those persons who gets royalties from them," Rollins said, "but they can't buy my soul for a few hundred dollars a year."

Rollins says he doesn't trust the oil company's promises. In fact, he proposes a complete moratorium on oil drilling here.

"I mean, everyone is in a panic because prices are going up, but I don't think resurrecting these wells is the answer," Rollins said. "I'm hoping that people start to stand up and say, look, oil is over."

This fall, county officials will decide whether to allow more production in this part of Los Angeles.