Accessibility links
Tito Puente's Self-Titled Masterwork Examined The Latin percussionist's classic 1972 album captures one of the greatest musicians of the 20th century at his peak. Bobby Sanabria, himself an award-winning bandleader, discusses the music and career of "El Rey del Timbal," Tito Puente. 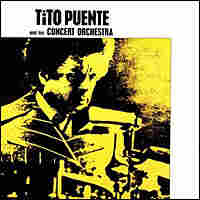 The cover art to Tito Puente and His Concert Orchestra. Courtesy of Fania Records hide caption 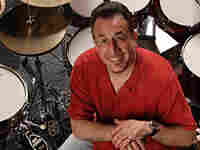 Well, anyone that has seen [Tito Puente] live can attest to the fact that he was the most exciting live performer on the planet. 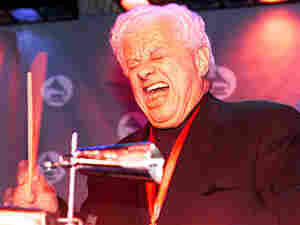 Tito Puente performs in 1999, more than 50 years after he started leading his own band. Frank Micelotta/Getty Images hide caption

It was a career that began in "El Barrio," Spanish Harlem. Puente lived it up and played it loud during the big-band heyday of the 20th century. When rock 'n' roll seduced the American public, he formed smaller ensembles and continued to garner awards and fame. Late in life, he even played himself on The Simpsons.

Puente died in 2000 at the age of 77. Joining Scott Simon to talk about Puente's self-titled 1972 masterpiece is another award-winning Latin percussionist and bandleader, Bobby Sanabria.

"Tito Puente is one of the most important musicians in any genre in the 20th century," Sanabria says. "I would put him up there with Stravinsky, Leonard Bernstein, Jimi Hendrix, etc., etc. Not only was he an incredible percussionist, but he was a fabulous composer and arranger. I don't think people realize the depth of this man's musicianship."

Laying Down The Law

The first cut on Tito Puente And His Concert Orchestra is called "El Rey del Timbal" — the king of the timbales — which is a strong statement from the timbalero. The song also includes the lyrics "yo soy la ley," or "I am the law." Sanabria says that if anybody could lay claim to all that, it was Puente.

"The drummer is usually in the back of a big band, but what Tito did with his orchestra is he put the percussion up front," Sanabria says. "The conga, the bongo and himself on the timbales in the front. Now, that served a dual purpose. He could cue the orchestra, and it also served as a symbol, too, that he was the leader of the band to the audience and he was the law, as it was concerned."

Puente was a professional musician even before he dropped out of high school. Sanabria says that Puente also studied piano for eight years and took lessons on the drum set with a Harlem show drummer.

After playing with early New York Afro-Cuban pioneers such as Machito, Puente joined the U.S. Navy, where he saw active duty in WWII. He was mostly a musician brought on board ships to boost morale — he played clarinet and alto saxophone in the Navy band and played piano during mess-hall hours — though he was present for the battles of Midway and Guadalcanal, and also served as a gunner's mate.

He was also his ship's bugler, Sanabria says.P>

"Very funny story: Once he was warming up and he didn't know the microphone was on," Sanabria says. "And he started playing 'General Quarters,' which means '[go to your] battle stations,' just to warm up. And all of a sudden he looks around and the whole ship is going into a frenzy. And the captain all of a sudden goes on the loudspeaker: 'Puente, get down here!'"

After the war, Puente studied at Juilliard School of Music in his native New York. When he started his own bands, he used his classical training in arranging and orchestrating.

One of the tunes on Tito Puente and His Concert Orchestra is called "Ritual Fire Dance" — an adaptation of Spanish composer Manuel de Falla's eponymous piece. Puente takes the melody and sets it over several different rhythms: a rock beat, a Cuban comparsa rhythm, a West African bembe rhythm, even a cha-cha-cha.

"I think Tito's Juilliard training comes out in all of the things that he did," Sanabria says. "This is a great example of his knowledge of Afro-Cuban rhythm, and his knowledge of the orchestra."

On another piece, called "Picadillo," he reworks an early composition from the late 1940s. Puente's first band was called The Piccadilly Boys, as Sanabria recounts.

"A promoter kind of gave him that name to sort of cross over into the so-called Anglo-American market," Sanabria says.

On Stage With Tito

But could Tito Puente bring that same level of composition to a live performance?

"Well, anyone that has seen him live can attest to the fact that he was the most exciting live performer on the planet," Sanabria says.

That's a good thing, considering the emphasis on dancing in Latin jazz.

"In Afro-Cuban music, we've inherited this concept of being possessed by the music on the dance floor," Sanabria says. "The same thing used to happen in jazz ... But we have this concept that goes way back further in terms of having a spiritual experience on the dance floor. And when you hear the power of this band coming at you like a tidal wave, and with those rhythms percolating, it excites the human organism to its utmost. It's like being in ecstasy.

"I'm not saying it's better than sex, but it's close to it."

A Master on a Masterwork: Machito's 'Kenya'

A Master on a Masterwork: Machito's 'Kenya' 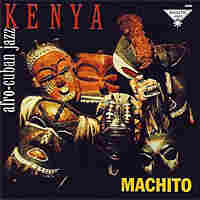 Throughout his childhood and teen years, percussionist Bobby Sanabria was introduced to the masterworks of Latino musicians who would become his musical heroes — among them Tito Puente and bandleader Chico O'Farrill.

"The Machito Afro-Cubans were the leaders," Sanabria says. "They were the first band to successfully use the complex and rich harmonic style of jazz-arranging technique and also featured great virtuosic jazz improvisers, with authentic Afro-Cuban rhythms that we inherited from West Africa and crystallized into new forms on the island of Cuba."

Machito's music is especially demanding, Sanabria says, because of the interplay of multiple sections: saxophones, trumpets, trombones and a rhythm section amplified by Afro-Cuban percussion. He also notes that Machito's group was the first truly multiracial band.

"This was an example of the great musical and cultural interchange that was happening at the time between the jazz community and the Latino community in New York City, and still exists to this day," Sanabria says.

Sanabria singles out Machito's 1957 album Kenya for both its creation and its impact on Latin music.

"Everything we do has some root with this orchestra," Sanabria says.