Accessibility links
Barack Obama Chooses Sen. Joseph Biden For VP Democrat Barack Obama has selected Sen. Joseph Biden to be his vice presidential running mate. Biden, 65, has run for president twice and has experience with foreign and defense issues. The choice has garnered praise from fellow Democrats and mixed reactions from Republicans. 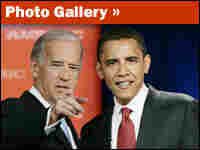