Accessibility links
U.S. Men Reclaim Basketball Gold The last big medal event at the Beijing Olympics — the men's basketball final — was a thriller for the ages. The American "Redeem Team" got redemption by beating Spain, 118-107.

The last big medal event at the Beijing Olympics — the men's basketball final — was a thriller for the ages. The American "Redeem Team" got redemption by beating Spain, 118-107.

The summer Olympics ended today, and among all the fireworks, there's a sparkler of redemption for U.S. basketball. Twelve NBA stars who call themselves the Redeem Team lived up to that name, beating Spain 118 to 107 to win the gold medal.

NPR's Tom Goldman reports from Beijing that the game was one for the ages.

TOM GOLDMAN: As the Olympic basketball tournament unfolded, and the U.S. began shellacking its opponents by an average of 30 points a game, this moment was never in doubt.

GOLDMAN: But when Kobe Bryant, LeBron James, Dwayne Wade and the nine other Redeem Teamers stepped up onto the medal stand, they knew how close they'd just come to standing a step lower, where the Spaniards and their silver medals were. So did their coach, Mike Krzyzewski.

Mr. MIKE KRZYZEWSKI (Coach, United States Olympic Basketball Team): I'm proud of our guys. We played with great character in one of the great games in international basketball history, I think.

GOLDMAN: You heard right. U.S. versus Spain, a match-up that resulted in a 37-point American blowout eight days earlier, is being called one of the great Olympic hoops moments - and it was. Playing without their star guard, Jose Calderon, and apparently without any recollection of the blowout, Spain was, in the words of U.S. player LeBron James, unbelievable.

The Spanish players were tough and physical on defense. On offense, they fearlessly drove to the basket and calmly drained long-range shots. As good as they were, the Americans were better.

GOLDMAN: With just a few minutes left in the game, Kobe Bryant sank a three-point shot and was fouled. Spain had clawed to within five points, and the basket and free-throw were a huge boost for the Americans. The play spoke volumes. As Bryant rose into the air to shoot, he knew what the doubters thought: The Americans can't win close games, they can't make outside shots when they have to, a critical skill in the international game.

But the ball went in, one of many moments when the U.S. players essentially said doubt this. Here's Bryant after the game.

Mr. KOBE BRYANT (Basketball Player): Everybody wants to talk about NBA players being selfish, being arrogant, being individuals, but what you saw today was a team binding together, facing adversity and coming out of here with a big win.

GOLDMAN: All those nasty things he mentioned actually did exist on earlier U.S. teams, one slapped together with NBA all-stars without much thought about chemistry or teamwork, like the 2004 team that finished third at the Athens Olympics. Carmelo Anthony was on that team.

Mr. CARMELO ANTHONY (Basketball Player): We was at America's lowest point in '04, and to be sitting here, you know, in front of you guys tonight and be on top of the world, I think we did a hell of a job of putting American basketball back where it's supposed to be, which is at the top of the world, and I'm just so proud right now.

GOLDMAN: Sunday's win was three years in the making. USA basketball signed up players willing to make that time commitment and willing to merge themselves into a collective ego.

They were good Olympians. They embraced the China experience, interacting with athletes from other sports and with the locals, who adored them, but the Olympics ultimately were extra credit for these players.

Now it's back to their day jobs, which keep them rich and famous, but as the Beijing Olympics end, thousands of other athletes face uncertainty, like 28-year-old Jennifer Hodson, a rower from South Africa.

Ms. JENNIFER HODSON (Olympic Rower, South Africa): It's the end of a four-year block, and what do we do next? I haven't thought about it because I've been concentrating so hard on my racing, but it's quite a scary prospect. I'm not too sure what's coming next. We'll see. I've got to get out there and make some money, I guess.

GOLDMAN: With her kayak paddle propped up against her shoulder, Jennifer Hodson said she was disappointed she just finished eighth out of nine finalists in her events. She'd hoped to get top six. Maybe in four years, if she stays in her sport, she'll have a shot at redemption, too. 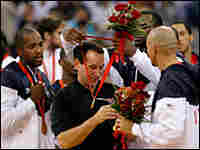 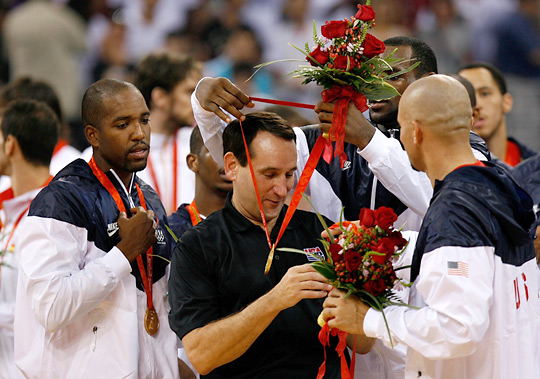 U.S. head coach Mike Krzyzewski of the United States receives a gold medal from Lebron James after defeating Spain in the gold medal game during Day 16 of the Beijing 2008 Olympic Games.

From NPR News this is Weekend Edition. I'm Liane Hansen. The closing ceremony at the Beijing Olympics is just getting under way. On the final day in an exciting victory over Spain, the U.S. men's basketball team won the gold medal. The Olympics were marked by stirring world-record performances. Controversies over pollution and China's human rights record took a temporary backseat as the athletes took center stage. We're joined from Beijing by NPR's Frank Langfitt who's been following the sports, the politics, and the pyrotechnics. Frank, first of all, what's going to happen at the closing ceremony?

FRANK LANGFITT: Well, it's going to be another extravaganza by Chinese director Zhang Yimou. It actually just started a few minutes ago with a huge burst of fireworks over the Bird's Nest. And tonight there are going to be 7,000 performers. And like the opening ceremonies, we're going to see a lot of drums. There's a floating one - a giant drum floating over the stadium right now. People are going to be soaring around the air. And then there's going to be an eight-minute handover performance for London. You know, they're going to be doing the games in 2012. And that's going to feature soccer star David Beckham and Jimmy Page, the guitarist with Led Zeppelin.

HANSEN: Well, we mentioned the gold medal over Spain in men's basketball, but what were some of the other memorable moments in the competition?

LANGFITT: Well, you know, I think the two big stars here were Michael Phelps and Usain Bolt. I mean, they essentially rewrote the record books for their sports. Phelps, obviously in the pool: seven world records, eight golds. Usain Bolt, I mean, really kind of literally bursting onto the scene: three world records, three golds. And for me, you know, the most exciting moment that I saw was Bolt in the 200-meters in the Bird's Nest. I remember him coming around that turn, and getting into the straightaway he just accelerated and left everybody behind.