Accessibility links
Debate On China's Openness Continues The Beijing Olympic Games have ended in a blaze of fireworks, with the largest share of gold medals going to the host country. Chinese citizens and state media said that their success in holding the games for the first time would make China a more confident and open country.

The Beijing Olympic Games have ended in a blaze of fireworks, with the largest share of gold medals going to the host country. Chinese citizens and state media said that their success in holding the games for the first time would make China a more confident and open country.

But in a statement, the U.S. embassy in Beijing expressed disappointment that China did not display more openness during the games. 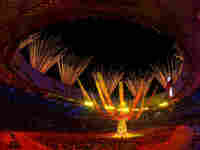 Fireworks ignite over the National Stadium during the closing ceremony of the Olympic Games Sunday in Beijing. Paul Gilham/Getty Images hide caption 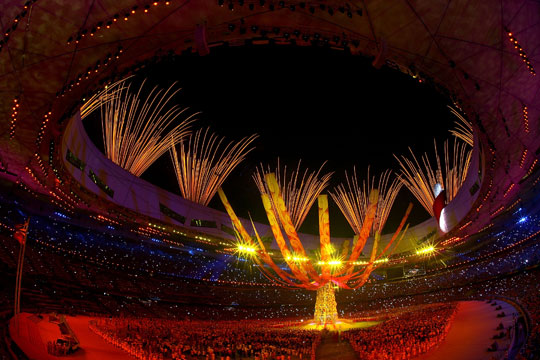 Fireworks ignite over the National Stadium during the closing ceremony of the Olympic Games Sunday in Beijing. 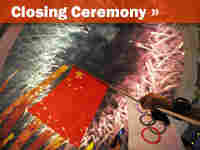 See photos from the closing ceremony

The games ended just as they began, with a massive spectacle of precise choreography and bombastic fireworks at Beijing's new National Stadium, popularly known as the Bird's Nest.

Announcers noted that athletes had set 38 world records and 85 Olympic records at the games, and China had for the first time captured the biggest share of gold medals — 51, with 100 medals in all. The U.S. won a total of 110 medals, 36 of them gold. The last country other than the U.S. or the Soviet Union to lead the gold medal count was Germany at the 1936 games in Berlin.

Many ordinary Chinese felt that by hosting the games, China had successfully showcased its achievements.

"The Olympics have increased Chinese people's confidence. At first, there was a lot of criticism, but since the opening ceremony and the start of the games, there's been widespread praise. And this comes in a year where our confidence was shaken by natural disasters and other events," said Zhao Qiang, a graphic designer in Beijing.

Some of the political fallout from the games has not been so positive. Last week, police sentenced several members of the group Students for a Free Tibet and citizen journalists recording their protests to 10 days of administrative detention for "disturbing the public order." The group said that on Sunday during the closing ceremony, China deported those detained .

At an impromptu press conference on Friday, British activist Alice Speller said the group was simply trying to expose China for what it is.

"China is trying to show to the world this face, that they are a modern, progressing country that's open access for everyone, and it really is not the truth. The real face is one that denies freedom of speech, that denies it brutally and violently when it can," Speller said.

But some observers point out that from a Chinese perspective, the Olympics are not a time for openness: They are a time to show social order and unity, a time when you tidy up your house before the guests arrive — or at least hide the dirty laundry.

"Perhaps some of the Western governments and human rights organizations had it a little bit backwards, where they expected that the Olympics would be a time for more freedom," said Daniel Bell, who teaches political philosophy at Tsinghua University in Beijing. "I think the government — and I think there's substantial popular support for this view — view [the Olympics] in a very different way, [as] a time to have temporary controls on society."

Bell argues that China's historic trend is for more political openness. Now that the Olympics are over, he said, perhaps that trend can continue.