Accessibility links
Billie Jean King Remembers 'Battle Of The Sexes' As the 35th anniversary of Billie Jean King and Bobby Riggs "Battle of the Sexes" match approaches, co-host Renee Montagne talks to tennis legend Billie Jean King about that famous match. King highlights the lessons that helped her win that match in a new book, Pressure is a Privilege.

As the 35th anniversary of Billie Jean King and Bobby Riggs "Battle of the Sexes" match approaches, co-host Renee Montagne talks to tennis legend Billie Jean King about that famous match. King highlights the lessons that helped her win that match in a new book, Pressure is a Privilege.

The U.S. Open tennis championship opens today in New York, and the woman player who wins will take home the same amount of prize money as the man who comes out on top. Tennis legend Billie Jean King can be largely thanked for that.

Thirty-five years ago, she led the fight for that bit of gender equality at the Open. It was a big year for tennis. 1973 also saw the tennis match billed as the Battle of the Sexes, where Billie Jean King faced Bobby Riggs. A flamboyant one-time tennis star, he challenged King with the taunt that men were simply the superior athletes.

That match is at the heart of King's new book: "Pressure is a Privilege: Lessons I've Learned from Life and the Battle of the Sexes." Good morning.

MONTAGNE: Let's get to the match in just a moment, but a little background. Bobby Riggs had been trying to get you to play him for years when this finally happened in 1973, but you didn't want to play him.

Ms. KING: No, because we had just started women's professional tennis, and it was a very difficult time for us. We didn't have any infrastructure, so we were trying to get people to even hold tournaments, and Bobby kept saying, Play me, play me, and I said, Bobby, we're so busy, I'm so busy, I don't have time.

So finally he played Margaret Court, who quite frankly at the end of '73 was the number one player in the world, and he beat her like 6-2, 6-1. I mean, it was just annihilation, basically, and I wasn't there to see it, but it was amazing.

When I came back from Japan and heard the score, I just said, well, I have to play him now.

MONTAGNE: The worry of course was that if Bobby Riggs' victory stood, it would undo what professional women tennis players had managed to gain, which is how it happened that on the night of September 20th, 1973, Billie Jean King took on Bobby Riggs at the Houston Astrodome.

Paint a scene for us of what it was like in the Houston Astrodome when you played Bobby Riggs. It was something of a three-ring circus.

Ms. KING: It was. It was pure entertainment, which I love anyway, and we had all - tons of celebrities there, and Glen Campbell, and we had - George Foreman was there.

Bobby gave me a big Sugar Daddy because he was getting a lot of money from Nabisco, and then I gave him a piglet, a little baby, with a little bow around his little neck. He was so cute.

MONTAGNE: And that would've been male chauvinist pig.

MONTAGNE: And you came in on something like a throne.

Ms. KING: Like an Egyptian litter, I guess they call it. I'm not sure. And then Bobby was in a rickshaw with his - we call them bosom buddies.

MONTAGNE: His beautiful women. He had an entourage.

Ms. KING: Yeah, total entourage, and I had the - I think the track team from Rice University holding me up. Thank God they were very strong, because I'm a little afraid of heights. So I was like please be careful.

MONTAGNE: Well, how did you beat him? What went on in your mind and also with your playing that - so that you managed to pull this off quite handily?

Ms. KING: Well, my preparation was impeccable. The day before the match, I went into the Astrodome to check it out because I knew it wasn't a normal tennis stadium. So I knew it was going to be very different.

I met all the security guards. I met - you know, I knew where all the elevators were, I knew where my locker room was going to be, and so it doesn't mean you're still going to win, but at least you've given yourself - you play the percentages, right?

MONTAGNE: Once you were actually on the court, did you play the game that you expected to play, that you planned out?

Ms. KING: Well, we always talk about this. From the base line to the umpire's chairs, we walked on the court after I got off that Egyptian litter. I thought, you know, I know I should play my game, but I think what I'm going to do is have five rallies, and I don't care if I win the point, but I'm going to run him into the ground, and it doesn't matter if I win the point or not, but that I have to do, and I have to do it in the first set.

I put everything into one set in my head, that first set, that I had to win it.

MONTAGNE: Well, when one sees film of this match, it does look like you ran Bobby Riggs right into the ground.

Ms. KING: And I purposefully hit the ball as softly as I could. Of course, we couldn't crack an egg in those days with our wooden racquets anyway, but I hit it - and the court was quite dead, meaning you have to get up to the ball.

MONTAGNE: Did your victory over Riggs have an immediate impact on women's tennis? I mean, that was such a show.

Ms. KING: It actually had an impact on tennis. The men and the women's professional tours had the biggest attendance ever in 1974 because of it. We got our first network contracts because of it, and that's both men and women.

It's funny how when a woman does something they always think we only affect half of the population, and people will come up to me and say thanks for what you did for women's tennis all the time, and I know they'd never say that to a guy.

If they walked up to a male, they would just say thanks for what you did for tennis. And it's interesting: I think people perceive women that way all the time, and that's not good because if you affect one human being, I think it's a domino effect.

It changes the puzzle. It changes the framing, everything, and also what came from this match is the first generation of men of the women's movement, because I have men coming up to me today that have daughters, and they have tears in their eyes, and they tell me how that match, they were 10 years old, 12 years old, 17 years old, and how that match changed their life and how they've raised their daughters, and they're the first generation of men that truly believe that their daughters and sons should have equal opportunity.

MONTAGNE: Thank you very much for talking to us.

Ms. KING: Thank you so much.

MONTAGNE: Billie Jean King's new book is called "Pressure is a Privilege: Lessons I've Learned from Life and the Battle of the Sexes." And one final note on the spectacle of the Riggs-King match. The broadcast of that match opened with the song "Anything You Can Do, I can Do Better." The song became famous many years earlier, in the 1946 Broadway production "Annie Get Your Gun," and here are the stars who originally sang it: Ethel Merman and Ray Middleton.

(Soundbite of song, "Anything You Can Do, I Can Do Better")

Mr. RAY MIDDLETON (Actor): And now, little lady, if you'll kindly step up to the parapet, I'll give you a lesson in marksmanship.

Ms. ETHEL MERMAN (Actor): You couldn't give me a lesson in long-distance spitting.

(Singing) Anything you can do, I can do better. I can do anything better than you.

Mr. MIDDLETON: (Singing) No you can't.

MONTAGNE: You know, Steve, I think we're beyond that kind of cross-gender volleying. I mean, it's not because I'm a woman that anything you can do I can do better.

INSKEEP: I was just sitting here thinking we should have some kind of a challenge, an interview challenge, and get celebrities to come and watch us ask questions. 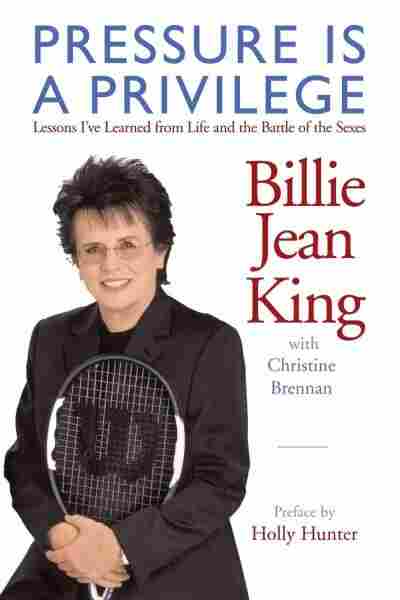 Pressure is a Privilege

Lessons I've Learned from Life and the Battle of the Sexes