Accessibility links
With Olympics Over, China's Self-Confidence Soars China's 51 gold medals proved its status as a sports powerhouse, and the games showed off its modernity and organization. "China has stood up in the world," one expert says. 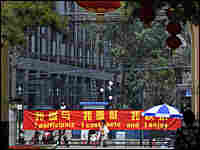 A man walks past a banner Aug. 3 at Beijing's Ritan Park promoting the 2008 Olympic Games. Chinese authorities said they would allow demonstrations at the park. No protests were allowed, despite 77 requests. Jewel Samad/AFP/Getty Images hide caption 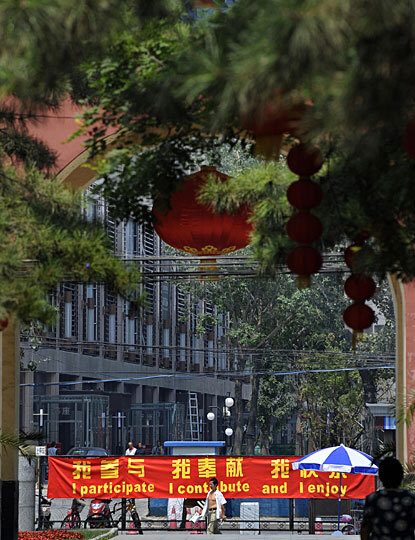 A man walks past a banner Aug. 3 at Beijing's Ritan Park promoting the 2008 Olympic Games. Chinese authorities said they would allow demonstrations at the park. No protests were allowed, despite 77 requests.

From the moment 2,008 drummers beat their countdown to the roar of the crowd during the opening ceremony, it was clear Beijing's Olympics would be a spectacle. And so they have proved: A staggering number of records fell at the stadiums that are state-of-the-art monuments to China's modernity.

"This is incredibly dramatic for a global perception of China, and also for China's self-perception [that] it can handle something on this scale," says historian Jonathan Spence of Yale University. "It's a kind of financial coming-of-age. It'll be an important marker, probably in a positive direction, as far as we can tell at the moment."

Chinese leaders received 80 world leaders for the opening ceremony, including President Bush. The dignitaries attended a banquet, described as the most important meal in Chinese history. Such a concentration of political influence paying court to Beijing spoke volumes about China's new soft power.

David Shambaugh of George Washington University says the Olympic experience might allow Beijing to move on from what it saw as the century of humiliation at the hands of foreign powers.

"That aggrieved nationalism was the dominant narrative for half a century, so the Chinese Communist Party staked its own legitimacy on overcoming all this humiliation," Shambaugh says. "Now China has stood up in the world, it's clear for everybody to see. This offers China a chance to bury this aggrieved baggage they've carried with them, and stand more confidently in the world."

Chinese fans supported their athletes enthusiastically, but largely without lapsing into nationalistic fervor. Their sportsmen and women scooped up 51 gold medals, more than any other country. It was an extraordinary display of sports superiority in a country where gold medals symbolize national strength.

"This is not only for sportsmen and women to prove something — it's for the nation to prove something," Huang says. "This is a prosperous nation. People are doing well, and that's more important than simply winning medals from the games."

That obsession with appearances led to incidents of deception in the opening ceremony. In one case, a child actor lip-synced — the real singer was judged too unsightly to represent the country.

But viewers also saw Beijing's rebirth as a supermodern city amid breathtaking architectural feats, like the national stadium, also called the Bird's Nest.

The cost of the Olympics is estimated at $43 billion, and that is reaping rewards: Two-thirds of those asked in one British poll believed the games would improve Western perceptions of China.

"I spoke to one Western guy — he said before, for him, his image of China was 1989 — the crackdown. Now it's the Bird's Nest," says Zhang Lijia, the author of a memoir about growing up in China called Socialism is Great. Zhang, too, is proud, but also critical.

"I think the government could have taken this as a good opportunity to address the real issues: To crack down on corruption, to improve the rule of law, to open up the media, to provide more channels for people to express their grievances," Zhang says. "But instead, to absolutely guarantee the smooth operations, the government tries to hide the problem and takes excessive measures."

One example: Three parks were designated as protest zones for the Olympics, but not one legal protest was made, despite 77 applications to the authorities. Rights groups say those who applied and vocal critics of the government have been intimidated, even detained, and the Olympics were a catalyst for human rights abuses. These games have underlined Beijing's paranoia, its fear of dissent.

On one playing field there was a little-noticed political protest, rooted in sport.

It was during an Olympic soccer match. Chinese soccer fans, disgusted with their own team's poor performance, shouted in unison for the sacking of the government official in charge of Chinese football. In any other arena, such a demand would be seen as a challenge to government control.

"Government has to do something to improve Chinese soccer skills," says Xu Guoqi, author of Olympic Dreams: China and Sports, 1895 to 2008. Xu wonders if sport could actually drive political reform in China. "To do that, they have to take care of widespread corruption, hold officials responsible for failure, follow the rule of law. In that category, I think sports could trigger revolution — not radical revolution — but piece by piece."

But for now, the Olympics have led to tightened controls. With another lavish ceremony, Beijing closed the book on an event that has been the focus of public life for a decade. China's Olympics were a sign of its ambition writ large, its determination to succeed, no matter the cost.