Accessibility links
Looming Energy Crisis In Mexico Stirs Debate As production of crude oil falls in Mexico, debate continues on the issue of privatization of the oil monopoly. Without radical reform, Mexico could run out of oil in less than a decade. 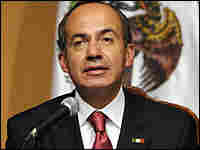 Mexican President Felipe Calderon speaks during a joint press briefing after the G-5 meeting on the sidelines of the G-8 summit in Sapporo on July 8, 2008. Jewel Samad/AFP/Getty Images hide caption 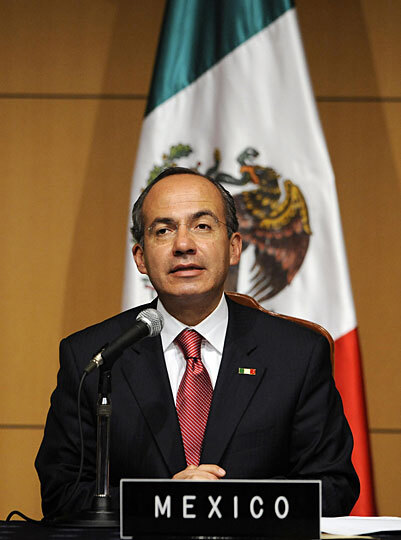 Mexican President Felipe Calderon speaks during a joint press briefing after the G-5 meeting on the sidelines of the G-8 summit in Sapporo on July 8, 2008.

Reform of Mexico's state-run oil company continues to dominate Mexican politics. There have been numerous debates and referendums on a proposal by President Felipe Calderon to open the struggling oil monopoly to foreign investors.

The left has denounced Calderon's plan as privatization of the nation's oil wealth, but Calderon and top officials within Pemex say that without radical reform, Mexico will run out of oil in less than a decade.

Just about everyone who has weighed in on the Pemex debate agrees that the Mexican oil monopoly is in crisis.

Production of crude is falling dramatically. In July, output at Mexico's largest oil field, Cantarell, was off 37 percent from the year before.

Pemex's exploration efforts have fallen flat, and by some estimates, what was once the world's sixth largest oil producer could exhaust its current reserves in less than seven years.

Pemex's refining and pipeline infrastructure is also lagging far behind demand. Despite being a major oil exporter, Mexico imports 40 percent of its gasoline because Pemex does not have the capacity to refine its own crude. Oil revenues fund almost half of Mexico's federal budget, so the crisis at Pemex has become a crisis for the nation.

Debate over President Felipe Calderon's reform plan has dragged on for months.

Calderon's proposal, among other things, would allow foreign companies to drill in deep water in the Gulf of Mexico, something Pemex does not currently have the technology to do on its own.

Alberto Montoya Martin del Campo, a professor of political and social science at the Iberoamericana University, testified recently before the Energy Commitee of the Mexican Senate and said Pemex is not the problem.

Del Campo said the problem is that for the past two decades, various administrations have used the state-run company as a cash cow and failed to reinvest in new infrastructure and exploration. He says the billions of dollars generated by Pemex has been a stagnating rather than a stimulating force on Mexico's economy.

All of this has blocked the country from becoming an economic power, del Campo says. He went on to argue that the reforms proposed by Calderon are too narrow and won't significantly change the oil company.

Others, however, say Calderon's plan goes too far and allows too much foreign involvement in Mexican oil.

"We believe the proposal of Calderon is a failure," says Sen. Graco Ramirez of the left-wing PRD, the Party of the Democratic Revolution. "It will not advance, and it will not be approved because the PRD and the PRI [the former ruling party] are not going to support the privatization of refineries and pipelines."

Both the PRI and the PRD have now put forward their own rival reform plans.

The Pemex debate has, in many ways, been an act of political theater. Odon de Buen, an energy analyst in Mexico City, says the debate has been useful in that it has made politicians and ordinary people think about Mexico's looming energy crisis.

But, he says, the debate can't go on forever.

"Every month, every year that we don't agree postpones the solution," de Buen says. "So we may be running out of oil before we get to what this reform is promising."

And de Buen says the debate about Pemex has focused far too much on fossil fuels. De Buen and some others are arguing that this is an opportunity for Mexico to look at its energy needs for the coming decades, and they want more focus to be placed on developing alternative energy sources.