Kennedys And Conventions: An Emotional History

Kennedys And Conventions: An Emotional History 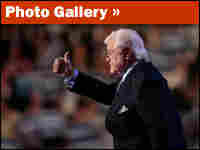 Gallery: Day One of the 2008 Democratic National Convention

The first night of the Democratic convention here in Denver was about the Obama family, to be followed the next two days by the Clinton family — Hillary on Tuesday and Bill on Wednesday. But Monday's emotional moment was about the last surviving brother of the Kennedy family, Sen. Ted Kennedy of Massachusetts, who was diagnosed with brain cancer in May.

It wasn't the first time convention delegates were brought to tears by a Kennedy.

That was in 1964. Lyndon Johnson, who succeeded to the Oval Office after the assassination of President John F. Kennedy, went unchallenged for the nomination that year. The convention, held in Atlantic City, was completely controlled by Johnson and his allies. But there was something that was still out of LBJ's hands: the expected emotional response to an address by Attorney General Robert F. Kennedy, the slain president's brother, who would be introducing a video tribute to the late president.

President Kennedy was murdered just nine months before the convention; the nation's grieving had not abated. Many Democrats felt that the best way to keep the Kennedy torch alive was to put Bobby on the ticket as Johnson's VP. The president obviously wanted no part of that.

So Johnson dealt with his Kennedy problem in two ways. First, he announced, with an apparent straight face, that no member of his Cabinet would be named to the ticket. Everyone knew that meant Kennedy, who later "apologized" to members of the Cabinet for taking them down with him. But what if the emotions that came from the convention tribute to JFK led to a "We Want Bobby" draft for VP? Johnson took care of that, too; he made sure the roll call for his running mate came before the Kennedy video.

So Johnson picked Minnesota Sen. Hubert Humphrey as his running mate. There would be no Bobby on the ticket to haunt him.

But then came the JFK tribute. To no one's surprise, tears were flowing everywhere. And then there was the sight of Bobby Kennedy on the platform, his voice quivering and soft, the pain apparent in his face. It was an extraordinarily emotional moment. And it would be the last time Bobby Kennedy would appear at a Democratic convention. He would be assassinated in seeking the White House in 1968.

As the last surviving brother, Sen. Ted Kennedy was under tremendous pressure to take up where Jack and Bobby left off — to seek the presidency or, at the least, the vice presidency. He turned down entreaties in 1968, declining to even show up at the convention that year in Chicago. Still recovering from his role in the accident at Chappaquiddick, where he drove off a bridge on Cape Cod and a female companion drowned, he refused George McGovern's offer to be his running mate in 1972. And he stayed on the sidelines in 1976. But in 1980 — interestingly, when there was a Democrat in the White House — Kennedy finally decided to run. Jimmy Carter led a united party back to power in '76, but he was on the defensive for most of his presidency. Inflation was high, confidence was low, and Democrats were concerned. Kennedy, succumbing to polls that showed him defeating Carter for the nomination, decided to run.

But Kennedy had problems of his own. As a disastrous interview with CBS' Roger Mudd showed, he had difficulty making the case why he should be president. And a hostage crisis in Iran gave Carter the excuse that he was too busy being president to campaign in places like Iowa or New Hampshire. Kennedy did win some primaries, in states like New York and Pennsylvania and California, but it was not enough to deny Carter renomination.

But the high point of the 1980 convention at New York's Madison Square Garden was not Jimmy Carter's acceptance speech. It was Ted Kennedy's emotional farewell, acknowledging defeat while at the same time fighting for the principles that got him in the race to begin with. "For all those whose cares have been our concern, the work goes on, the cause endures, the hope still lives, and the dream shall never die," he told a hushed convention crowd. It was one of the few times in history when a defeated candidate for the nomination stole the show.

Fast forward to Monday night's convention opener. On the schedule had always been a video tribute to Kennedy. But for days, there had been rumors that the ailing senator would fly to Denver and come to the Pepsi Center. And that, despite his frailty, he might actually speak. But until he took the stage, no one knew what to expect.

The thunderous ovation was quickly replaced by tears. It was, as everyone knew, likely to be Kennedy's last appearance at a national convention. His seven-minute address was filled with exhortations about health care and arguments on behalf of Barack Obama. He sounded strong and he looked healthy. But the emotions were in plain view on the faces of everyone who heard him. Just as they were for him in 1980. And just as they were for his brother in 1964.

Aug. 26 - Primaries in Alaska, where the indicted Sen. Ted Stevens (R) is up for re-election, and Florida.

POLITICAL JUNKIE EVERY WEDNESDAY AT THE NEWSEUM: I'm in Denver, but don't think that will keep me away from Wednesday's "Political Junkie" segment on Talk of the Nation, NPR's call-in program. I just won't be live at the Newseum. But you will still get the same brilliant analysis and sophisticated jokes.

IT'S ALL POLITICS: That's the name of our weekly podcast. It goes up on the Web site every Thursday and can be heard here. Want to subscribe? It's easy, and it's free! Simply go to the iTunes Web site, type in "It's All Politics," and you're there.