Accessibility links
Ryan Shaw On Mountain Stage The remarkable young soul singer grew up in a strict Pentecostal family before discovering a fondness for the classic records of the '60s and '70s. He brings his timeless delivery to a live performance on Mountain Stage. 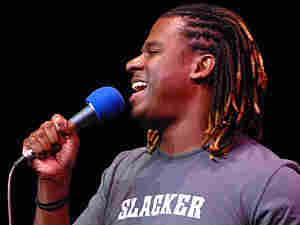 Ryan Shaw has a vintage soul sound, even though he was only 26 when this episode was taped. Brian Blauser hide caption

On his debut recording, This Is Ryan Shaw, young soul singer Ryan Shaw showcases a timeless sound that's both classic in delivery and updated with modern audio fidelity.

Like many of the greats before him, Shaw began singing in church. He grew up in a strict Pentecostal family in Decatur, Ga., so his earliest influences were the gospel songs of Keith Brooks, James Moore and the Pace Sisters. He then loaned his voice to Tyler Perry's musical I Know I've Been Changed before landing a job with the performing cast of New York City's Motown Cafe, singing covers of Marvin Gaye and The Four Tops.

In 2004, Shaw was recruited by the soul/doo-wop revue the Fabulous Soul Shakers. The opportunity eventually led Shaw to producer Jimmy Bralower, who quickly jumped to produce the young singer. One of his featured numbers with the Soul Shakers, "Do the 45," is included here in a live performance from his 2007 appearance on Mountain Stage.