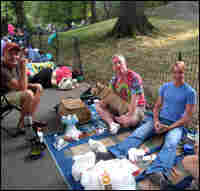 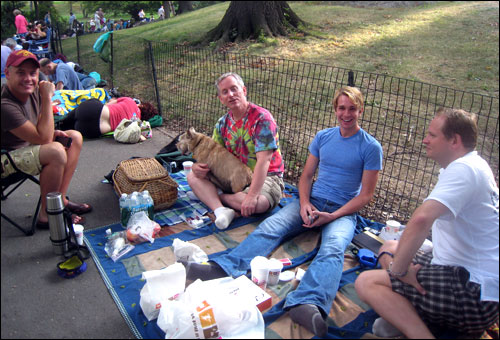 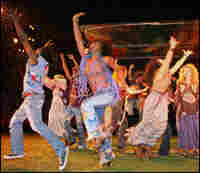 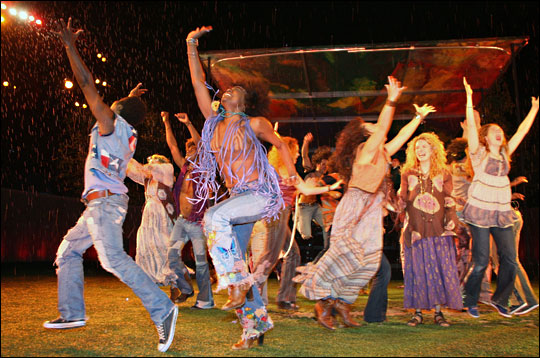 The Hair cast takes a curtain call on opening night at the outdoor Delacorte Theater.

Every day in New York City's Central Park, people by the hundreds line up in the early hours of the morning to get tickets to the Public Theater's free summer shows at the park's Delacorte Theater space.

But this year, the lines are particularly huge — the series is presenting a revival of the "American tribal love-rock musical" Hair, and many of the reviews have called the production extraordinary.

Free tickets are handed out at 1 p.m., so every night people line up — some as early as 3 a.m. By 7 in the morning, the line is longer than many city blocks.

"This is how I spend my weekends," James laughs.

Marsha Berry, who got to the park at 3 a.m., has seen the production five times — not counting the original production almost 40 years ago.

"This show is a grillion times better than the original, " Berry says. "I can't see it enough, and I can't bring enough of my friends to see it."

At about 6:30 one recent morning, with the line already curving around a hill, an actor who's doing security for the Public Theater walks down the line, shouting out the rules.

No swapping, cutting or changing places, cries Zach Spicer. Also: "Now that you are here, you are here, and you must not leave. Do not frolic in the park; do not go to Starbucks."

He points out the bathrooms, then gives out phone numbers to a local deli and a pizza place.

Within 30 minutes, bike messengers are passing down the line calling out names and delivering breakfast orders. Angus Killick is among the first to have his order arrive.

"I ordered a bagel with cream cheese — a very New York breakfast," Killick says, in a very British accent.

Neaby are all kinds of spreads: picnic baskets with home-cooked food, blankets groaning under doughnuts and coffee. And there are people playing cards, paging through novels, playing games, knitting or reading the Sunday New York Times.

Garrett Rosso brought his dog, named Kai. When I observe that the dog might not get into the theater, Rosso thinks about it for a second.

"It's a hippie musical; she should be able to attend," he says. "But she would probably bark."

A few yards away, Mark Jacoby puts new strings on his guitar, then begins to play some old folk and rock songs while others listen or sleep nearby.

When I walk up to Frank Silverberg, who tells me he is a financial advisor in his mundane life, but a definite theater lover, he sums the whole scene up concisely.

"We sit and schmooze, get to meet all the people on the line," he says. On top of which, "We get to see a great show for free."

The show's last performance is set for Sept. 14. Until then, at least, there's a sense of community in New York City that seems very unique.