Accessibility links
Take The Olympics. Give Me My NFL, Please When it comes to the people who run sports, look out for federations — and for officials wearing blue blazers. Commentator Frank Deford says team sports are easier to run than individual sports, and domestic sports are more manageable than international ones. That means the NFL trumps the Olympics.

Listen
Take The Olympics. Give Me My NFL, Please 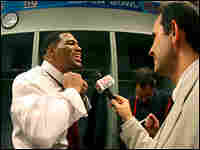 Back To Business: Moments after winning the Super Bowl, Michael Strahan and the New York Giants gave interviews — and dressed formally for them, part of the NFL's many rules. Donald Miralle/Getty Images hide caption

The Olympics reminded me again about the four guiding principles of sports organizations.

No. 1: It's much easier to run a team sport than an individual sport.

No. 2: It's much easier to run a domestic sport than an international sport.

No. 3: Any sports organization that has the word "federation" in its title is probably a mess.

And No. 4: Any sports organization in which volunteers have a lot of power over the professionals is really, really going to be screwed up.

The subset to No. 4 is: Beware of any sports organization in which too many people in authority wear blue blazers.

The classic best sports organization in all the world is the National Football League. See, it not only is a team sport but it is completely domestic, all-American. It is so American that the NFL game is even called "American football."

I think it's the only sport in the world that's identified by a country. Nobody says "Indonesian badminton" or "Scottish golf."

Even better for the NFL, hardly anybody else anywhere in the world even plays American football, so there's no federation with lots of volunteers to get in the way of what the NFL wants to do.

The commissioner of the NFL, whose name doesn't matter since Pete Rozelle left, has the cushiest job in sport. It's sort of like running General Motors before the Japanese made cars.

The most difficult decisions the commissioner of the NFL must make are along the lines of, "Oh my, what in the world are we going to do about Brett Favre?" And: "How can I keep Jerry Jones happy?" And: "How long do I suspend players who shoot people in nightclubs?"

By contrast, look at sports like boxing and tennis. They're all individuals and different countries, so nobody can ever take charge.

Tennis is so confusing that it runs about 64 weeks a year. Tennis and boxing also have so many competing agencies that they are all just identified by their initials, so nobody even knows who anybody is. We have the ITF and the WBC and the WTA and the WBA and the ATP and the WBF. American professional football has The Commissioner.

Team sports in all countries are invariably placed under more scrutiny, because fans are so loyal to their teams, and thus they force management to try to keep things on the up and up.

But the more spread out a sports organization, the more diffuse its charge — and the more individuals rather than teams are competing, the more inefficiency and, also, the more opportunity for chicanery.

Do you really think the International Olympic Committee is capable of finding out how old those itty-bitty little Chinese gymnasts really are? Please.

But whatever you think about America in the 21st century, the NFL probably works better than anything else in the United States, and maybe even better than Putin runs the Kremlin.