Accessibility links
Everyone Trashes The Media — Especially The Media It's not unusual to hear accusations of journalistic bias in political reporting. Some of the loudest accusations come from journalists who, like CNN's Lou Dobbs or MSNBC's Joe Scarborough, have made their own biases abundantly clear.

Everyone Trashes The Media — Especially The Media

Everyone Trashes The Media — Especially The Media 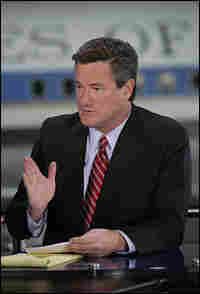 MSNBC morning show host Joe Scarborough is also a former GOP congressman. But he said: "I get frustrated by people who have an obvious partisan bias that don't proclaim that bias." Paul Drinkwater/NBC NewsWire via AP Images hide caption 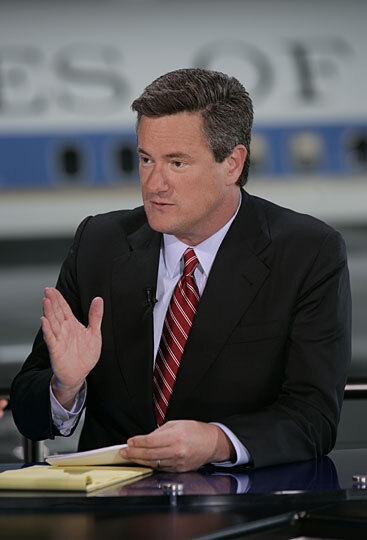 MSNBC morning show host Joe Scarborough is also a former GOP congressman. But he said: "I get frustrated by people who have an obvious partisan bias that don't proclaim that bias." 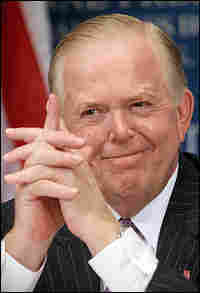 At the Democratic National Convention, Lou Dobbs said: "My colleagues in the national media are absolutely biased, in the tank supporting the Obama candidacy while claiming the mantle of objectivity." He's pictured here in a June 2007 photo. Karen Bleier/AFP/Getty Images hide caption 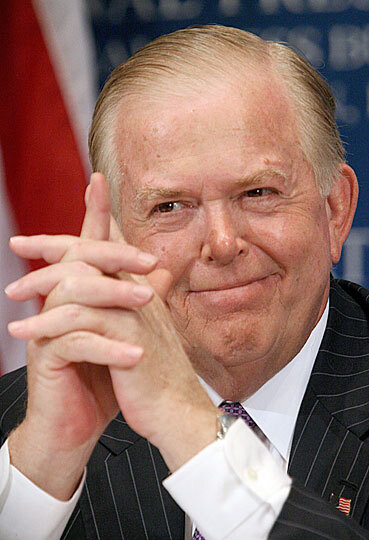 At the Democratic National Convention, Lou Dobbs said: "My colleagues in the national media are absolutely biased, in the tank supporting the Obama candidacy while claiming the mantle of objectivity." He's pictured here in a June 2007 photo.

I'm a little concerned. Seems like everybody involved with the conventions wants my job.

Pennsylvania Gov. Ed Rendell apparently wants it so much that he kicked off the week in Denver on Sunday by slamming the press for being too favorable to — wait for it — his own candidate!

"The coverage of Barack Obama was embarrassing," Rendell told a group of journalists at a brunch set up by Harvard's Shorenstein Center.

Remember, Rendell was a Clinton backer during the primaries who says he's working this very week to help unify voters behind Barack Obama. Nice move away from unity, governor, but welcome to the media criticism gig. Have my bosses told you something about my job security they haven't yet shared with me?

And newsies are firing at each other from inside the tent, too. Tuesday morning, MSNBC morning show host Joe Scarborough — himself a former GOP congressman — stopped the conversation cold when MSNBC correspondent David Shuster referred to the Republicans as "your party."

From the footage, you could tell Shuster clearly felt that Scarborough was trying to deflect his larger point about Republican John McCain's reluctance to set a time frame for withdrawal of U.S. troops from Iraq. But Scarborough has alienated some conservatives for periodically straying from the party fold, and he definitely wanted credit for that, too.

Shuster declined to comment, but I talked with Scarborough late Tuesday night.

"I get frustrated by people who have an obvious partisan bias that don't proclaim that bias," Scarborough told me. "I'm not uncomfortable with a guy like [Sean] Hannity, or [Bill] O'Reilly or [Keith] Olbermann, because anybody tuning in can tell they're not passing themselves off as objective journalists."

Scarborough says a lot of journalists who are registered as independent voters aren't being honest that they often have biases that affect their reporting. I asked him whether he included Shuster in that category, and Scarborough said no.

On the air, Scarborough and Shuster later hugged it out, Entourage-style. (Note: Yeah, we know, it's an HBO clip, so the language is premium cable strong.)

But afterward, I recognized there were two people with seemingly steady jobs who want to be media critics. I shouldn't have filed for that overtime last month.

Turns out, there's more! On Monday, Fox News took out big ads in papers, including The Wall Street Journal (which, like Fox, is also owned by Rupert Murdoch's News Corp.), to insert the word "partisan" into CNN's own marketing slogan, so it reads "CNN = Partisan Politics." Fox's claim is based on a study of the ideological beliefs of various audience members done by the Pew Research Center that suggested that more Democrats watch CNN than Republicans watch Fox.

Somehow, the ads don't mention that the same study found that CNN was more highly trusted than Fox News by viewers. Fox News, of course, proclaims itself "fair and balanced" in its reportage, but it also quite intentionally features the most potent lineup of conservatives on television, drawing many viewers disaffected by the rest of the media. If CNN and MSNBC, which has more explicitly sought a left-leaning prime-time lineup, deny they're liberal, they'll get into a food fight with Fox News, and lose by playing. If they don't, Fox's claims go unrebutted.

Pretty savvy move, and an extension of how the brawling Fox News has operated since its founding a dozen years ago. But you know who seems at least a bit sympathetic to Fox? CNN's Lou Dobbs!

In The Can For Obama?

Dobbs blasted away any notion of professional comity the night before. "My colleagues in the national media are absolutely biased, in the tank supporting the Obama candidacy while claiming the mantle of objectivity, whether they're on the front page of The Washington Post, New York Times or on any one of the newscasts," he told his viewers on Sunday evening. "I mean, it's ridiculous."

Dobbs, of course, surged to great ratings success in recent years by explicitly abandoning the mantle of anchor objectivity. Interestingly, Obama, on one of his biggest issues — protecting American jobs by maintaining trade barriers — has sounded more sympathetic to Dobbs' positions than has Republican candidate John McCain.

I fear I can already hear Dobbs' new job platform: taking over the Media Circus.

The funny thing is that Obama had by many accounts benefited from a media swoon this spring. Yet he's had anything but a good few weeks. He's lost momentum, and the polls have tightened considerably; he's had trouble bringing the Clintons and their supporters into the fold; and he's being dinged on the front pages and by all kinds of media types on TV for failing to unify the party strongly and craft a clear enough message so far this week. Both the Center for Media and Public Affairs and the television industry consultant Andrew Tyndall have found that Obama has gotten a lot more press than McCain since the primaries — and often a lot worse press than McCain.

So here's the back story: The press is trying to figure out what the heck it will look like as the previous economic models are disintegrating and major newspapers are falling apart. There are some who argue in favor of a British model, at least the print version. Papers such as the Guardian and the Times of London have a clear ideological bent, on the left and the right, respectively, but are nonetheless well-regarded for their reporting. Others say the media have to open up to doors to allow what we call civilians — people who aren't professional journalists — to influence or even control the material gathered and disseminated by the media. You're seeing a lot of the media tinker with this, as in efforts by CNN and other news organizations to incorporate amateur video into their Web sites and newscasts.

But in the meantime, the media are really on the defensive. Politicians from the left and the right are taking advantage of the opportunity to press any perceived advantage. And so are the Dobbses and Scarboroughs of the media world, people who in different ways have a strong point of view. Their push for news professionals to declare hidden biases plays in their favor.

Either that, or Scarborough, Dobbs and the entire PR division of Fox News really, really want my job. In which case, I'm glad I made deadline — this time.