Accessibility links
New Orleans' Scars Still Raw 3 Years After Katrina Friday marks the third anniversary of Hurricane Katrina striking the Gulf Coast. Some progress has been made in rebuilding New Orleans. And while huge problems remain, the woes don't seem as insuperable as they once did. 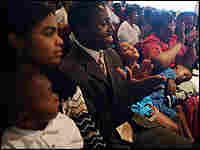 Worshipers celebrate at the official re-opening and re-dedication service of the Bethel African Methodist Episcopal Church in the Lower Ninth Ward earlier this summer. The church was heavily damaged in the flooding following Hurricane Katrina. Mario Tama/Getty Images hide caption 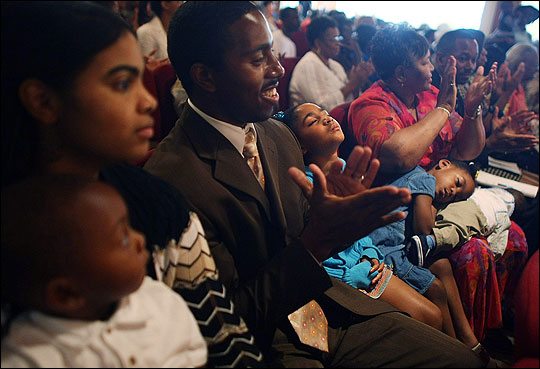 Worshipers celebrate at the official re-opening and re-dedication service of the Bethel African Methodist Episcopal Church in the Lower Ninth Ward earlier this summer. The church was heavily damaged in the flooding following Hurricane Katrina. 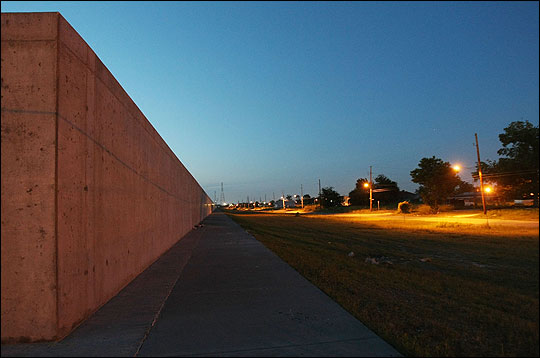 Seepage has been spotted at New Orleans levees recently. Experts fear the levees could fail again in another large storm.

On Friday, it will be three years since Hurricane Katrina made landfall and altered the history of the Gulf South.

In New Orleans — where the greatest calamity happened — there is tangible, concrete progress, though much work remains to be done.

The school system is being reinvented. The city has a new inspector general. The levees are getting new floodgates. By most estimates, more than two-thirds of residents have returned, out of a pre-Katrina population of 450,000.

But some of residents say that one of America's greatest cities has been irreversibly diminished.

Three years after the epic storm flooded 80 percent of New Orleans, some hard-hit neighborhoods are recovering better than many expected, and people have shown great resilience.

New Orleans resident Donald Benjamin views the state of the city with some optimism. He says the glass is half full. Benjamin lives in a just-restored blue-and-white shotgun house with his chihuahua, Riva. He sits in his driveway under a crepe myrtle tree in his Gentilly neighborhood, visiting with friends. While he thinks things are getting better, he takes the long view.

Most of the houses on Benjamin's block — which took on 6 feet of water — have been renovated and reoccupied, though a few sit moldering in the tropical sun. Resident Simone Lewis, who lives on the corner, says moving away was never an option.

"This is our home. This is what we know; we know no other way but New Orleans. We love New Orleans — our heart, our walk, our talk, everything is in New Orleans."

"We're back, and we're happy to be home. But it's not the same. It is not the same. So much is so different," Greta Burns says. "Of course, we've only been back two months, like I said."

In those two months, she's noticed the parents club that used to raise money for St. Augustine High School — where her four boys went — has dissolved. The regional track meet her husband used to organize was canceled. The Chat and Trump social club where Greta and her friends would cook a pot of jambalaya, play cards and talk about their children no longer meets.

"All that's over, all that's over. We don't even meet anymore because some of the members are no longer in New Orleans," Greta Burns says.

A grim housing picture is one reason why residents haven't come back to New Orleans.

Residents report that rents doubled and tripled. Smokey Johnson, who played drums for Fats Domino for 28 years, was one of the lucky ones. He's paying off a green shotgun built in Musicians Village by Habitat for Humanity.

"It's a lotta friends of mine can't get back. It' s a lot of 'em that are musicians," Johnson says. "They can't pay the rent."

The population is slightly older, slightly higher-income, and slightly whiter — though the city is still majority African- American. Tulane University biographer Richard Campanella says the flattening curve of the rate of return has a message.

"This, to me, I would read as a stabilization and the emergence of the post-Katrina New Orleans," Campanella says. "We all wondered about three years ago what it would look like."

In other words, New Orleanians will continue to return, but the repopulation curve suggests it will be a trickle, rather than a wave.

What that could mean for the mostly black districts devastated by the storm — such as Gentilly, the Lower Ninth Ward and New Orleans East — is deeply troubling to Lynette Causey. An African-American clinical psychologist, she sits behind her handsome, recently rebuilt home in New Orleans East — which today has almost no doctors.

"We had a great network of African-American professionals, and many of them were in private practice and many of them had to go elsewhere to make a living," Causey says. "And so they're not back."

Yet Causey doesn't want to sound like she's complaining, because she knows the nation is tired of hearing it.

"Our 15 minutes is gone, it's done with, it's over," Causey says. "So what happens? You stop talking about it, for the most part, and you just live."

Hope For The City: A Glass Half Full

Even for those who were minimally affected by Katrina, just deciding to stay has become something of a defiant declaration. Especially if they're in a profession where they can get a good job elsewhere, like Dr. Sissy Sartor, a fertility specialist.

"Now you're throwing your lot with a city that — there are many wonderful things that've happened since the storm, but it's not clear if this is going to be a phoenix rising out of the ashes or perhaps a slow slide backwards," Sartor says.

And yet, there is hope all over the city. Every person interviewed for this story, most of whom lost everything, described their view of the city's state as a glass half full.

Author Tom Piazza feared the worst. In his 2005 book, Why New Orleans Matters, he wrote that the city's spirit "is in terrible jeopardy right now. ... If it dies, something precious and profound will go out of the world forever."

Now that fear has passed.

"I realized this spring New Orleans was starting to recover a bounce in its step, it was starting to feel more like New Orleans to me," Piazza says. "For the first couple years after the storm, a kind of sense of palpable and present loss. Some of that is burning off."

Creating Home In Another City

Tyra Weatherspoon, a 38-year-old bank employee, fled uptown New Orleans — with its streetcars and ancient oaks and gumbo houses — for the featureless Houston suburb of Cypress. And her life has improved in nearly every way. In the past three years, she got married, and bought a spacious, four-bedroom home for a fraction of what she would've paid in New Orleans. She misses the New Orleans po'boy sandwiches. But that aside, she says she's close to good hospitals and good schools for her three children.

She's not sure if she'll move back to New Orleans.

"Maybe in a few years, maybe after they've done some more revamping," Weatherspoon says. "And also the levees, they're not fixed to where you can have another Katrina. That's horrifying. Until that is fixed, I don't think I'll go back no time soon."

There's no place like home, unless you find a better place to call home.