Accessibility links
Desperate Beauty: Britten's 'Death In Venice' Benjamin Britten's final, haunting opera Death in Venice (based on Thomas Mann's novella) finds an aging writer obsessed with one particular kind of beauty that leads to his downfall, in a production from Glimmerglass Opera.

"Death in Venice" doesn't really have a hit single -- at least as Mozart operas do. But if it did, this soul-searching number would be a good contender. Here, Aschenbach, tired and sick, recalls what he believes about passion and beauty from his reading of Socrates. 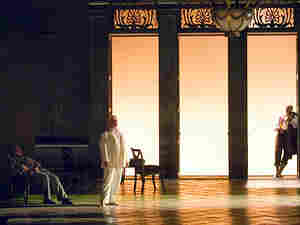 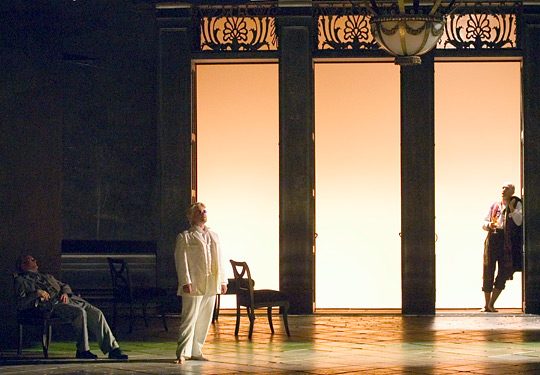 The aging author Aschenbach (William Burden, left) wages his own philosophical battle between beauty, art and love in Benjamin Britten's Death in Venice from Glimmerglass Opera. (Also pictured: John Gaston, center, as Apollo and David Pittsinger as the Traveler.)

At the turn of the 20th century, Western literature was going through a kind of identity crisis. Many writers were examining themes of chaos, personal and political decadence, and social decline. Oscar Wilde, André Gide and Thomas Mann were just a few of them. The element of homoeroticism was also present in many of these works. One of the most profound and enduring of these was Thomas Mann's Death in Venice, which was published in 1912 in Germany, soon translated into other languages and published all over the world.

Mann based the novella on his own experiences. In 1905, during a cholera outbreak, Mann was staying on an island just outside Venice. Years later, he visited the city once again. During that stay, in May 1911, he read an account in the newspaper of the death of composer Gustav Mahler. The central character of Death in Venice, a man named Gustav von Aschenbach, is based on both Mahler and Mann himself. The haunting story — of an aging writer and his obsession with a boy's beauty — has remained perennially popular, inspiring a play, a movie, a pop song and today's opera.

Mann's interest in the ancient classical themes of Apollonian discipline and Dionysian abandon are especially evident in Death in Venice. Mann revealed that he had been smitten with a young boy when he was in Venice a few years before the publication of the book. And in Benjamin Britten, Mann's preoccupation with beauty, yearning and obsession found a sympathetic ear. Britten, too, experienced passionate attachments to adolescents, though those attachments owed as much to nostalgia for the innocence of youth as they did to eros. Such sentiments often brought out the best in his music.

Benjamin Britten completed Death in Venice in 1973. The role of Aschenbach he wrote specifically for his longtime partner, tenor Peter Pears. Pears' unique, hauntingly delicate voice was perfectly suited to the intense, intimate atmosphere of the work. Because of failing health, Britten wasn't able to attend the premiere. He died just a few years later, leaving Death in Venice as his last opera.

The Story Of 'Death In Venice' 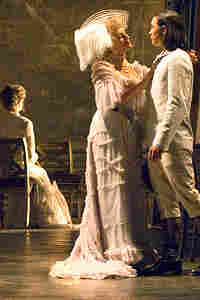 Nicola Bowie as Lady of the Pearls and Scott Chiba as Tadzio in Glimmerglass Opera's production of Death in Venice. hide caption 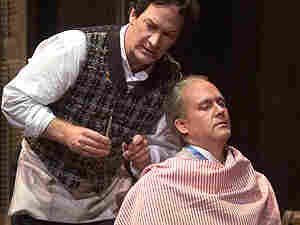 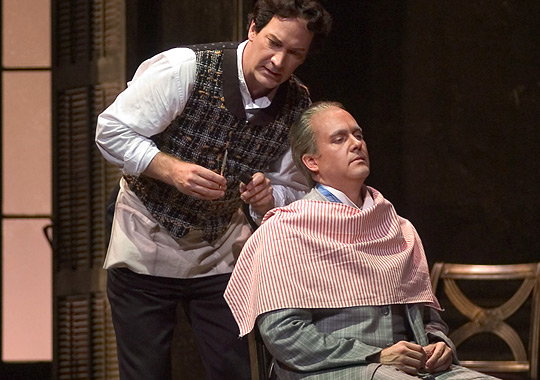 ACT ONE opens in Munich, where the writer Gustav von Aschenbach is weary and uninspired. He meets a mysterious Traveler, who tells him stories about the beauty of distant places. Though Aschenbach believes utterly in a rigid code of discipline, he's enticed by the tales of the Traveler, and decides to take a journey "to the south."

In the next scene, Aschenbach is on a boat for Venice. The word "Serenissima," the historical term for Venice, is repeated over and over. He notices an elderly man, dressed like a fop, with dyed hair and rouged cheeks, and shudders in embarrassment for him. When Aschenbach gets to the city, he boards a gondola — a symbol of death, he notes — for a trip to Venice's famous beach, the Lido. There, he checks into his hotel. That evening, Aschenbach notices a Polish family with an exceptionally beautiful young boy named Tadzio. He muses on the tension between an artist's passion and a sense of beauty and the discipline required to create art. He sees in Tadzio an ideal of beauty he has never been able to attain in his work.

Back at the hotel, fed up with the heat and crowds, Aschenbach tells the hotel manager that he's leaving. But because of a baggage mix-up on the way, his plans are thwarted, and he ends up back in Venice after all. When he sees Tadzio again, he's glad, and he resolves to stay.

In the final scene of Act One, Aschenbach once again watches Tadzio on the beach. In a burst of inspiration, he sings, "The boy shall inspire me. The power of beauty sets me free." And he's finally forced to recognize the truth: He is in love with Tadzio. As the boy passes him on the way to the hotel and smiles at him, Aschenbach sings to himself, "I love you."

As ACT TWO opens, Aschenbach agonizes over his emotions, and over the fact that he can't even speak to Tadzio. In the next scene, Aschenbach is in the hotel barbershop where he overhears rumors about some kind of illness in Venice. But when he asks the barber about it, the man is evasive. As Aschenbach walks around the city, he begins to hear more rumors: Some kind of infection is in the air, and people are advised to take precautions. The word "cholera" is mentioned but quickly dispelled. Aschenbach encounters the Polish family and follows them through the city.

In the next scene, Aschenbach and the other hotel guests are enjoying a show by a traveling troupe of actors, performing a satirical piece about love. When Aschenbach questions the leader about the supposed plague in the city, the music turns sinister.

At a travel agency, Aschenbach arrives to find the place thronged with nervous people. At first, the travel agent is just as evasive as everyone else has been, but he finally admits that "death is at work. The plague is with us." He advises Aschenbach to leave before the city is blockaded. Aschenbach goes back to the hotel determined to warn Tadzio's mother, but when the woman appears, Aschenbach is dumbstruck. He realizes that his only concern is his love for Tadzio.

That night, Aschenbach has a dream: Apollo and Dionysus are doing battle and Dionysus wins. Aschenbach wakes up in a fevered state, ashamed at the implication of his dream. Later, Aschenbach watches Tadzio and a few other children play on a nearly empty beach. Then, in the barbershop, Aschenbach gets his hair dyed and his cheeks rouged, a look that recalls the elderly fop in Act One.

He then follows the Polish family once again through the city. This time, Aschenbach has convinced himself not only that he looks attractive, but that Tadzio returns his feelings. He buys some strawberries from a vendor, but is disappointed that they're overripe and mushy. He draws an analogy with his artistic credo, meditating on sensuality and what he calls the "abyss" of passion.

In the final scene, the Hotel Manager and Porter discuss the departure of their guests. Aschenbach asks if the Polish family is also leaving. Yes, he's told, right after lunch. Aschenbach walks out to the deserted beach and sits in his usual chair. Tadzio and a few other boys come onto the beach and begin to play. Their play turns rough, and one of the boys shoves Tadzio's face into the sand. Seeing this, Aschenbach cries out and rises from his chair. The other children run off, leaving Tadzio alone. Aschenbach calls out the boy's name one last time, and Tadzio seems to respond. Then Aschenbach slumps in his chair and dies, as Tadzio walks out toward the sea.