Accessibility links
Learning To Lead From The Seat Of A Kayak Each year, the National Outdoor Leadership School gives about 3,000 young people an education in how to live and work in the outdoors. The lessons focus on safety, survival, and teamwork — and the students hope to translate them into their daily lives back home.

Listen
Learning To Lead From The Seat Of A Kayak 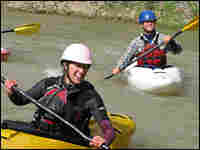 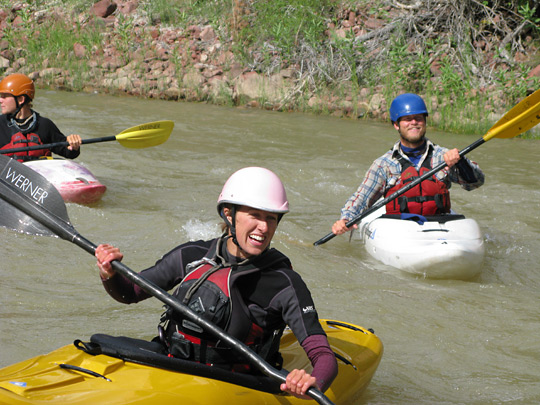 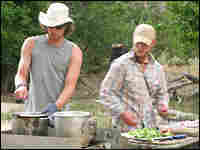 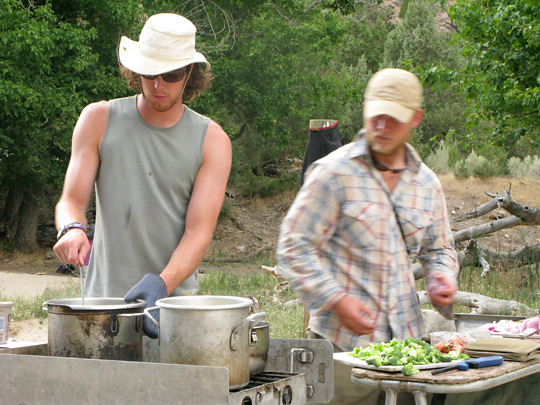 Camp chores like cooking breakfast are shared among the team members. 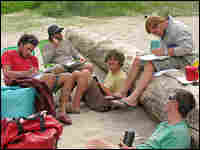 Students fill out evaluations at the end of their course. NOLS courses have a strong academic component, and students can receive college credit. Larry Abramson/NPR hide caption 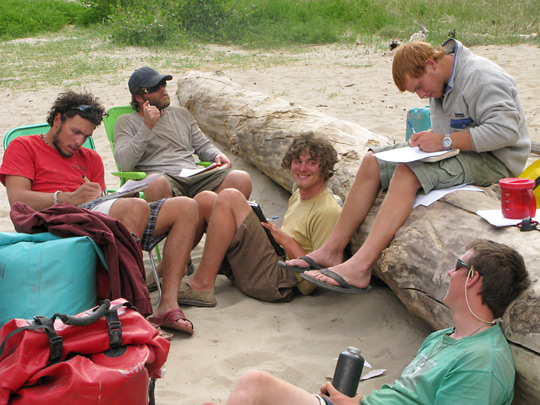 Students fill out evaluations at the end of their course. NOLS courses have a strong academic component, and students can receive college credit. 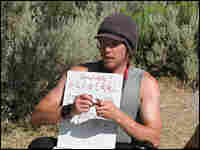 Josh Sherman, a musician from Nelson, British Columbia, led regular drumming classes for his fellow students during the course.

Just a few days ago, 11 men and women emerged from 70 days in the Western wilderness. They were not lost. In fact, they had signed up for an arduous course with the National Outdoor Leadership School.

Each year, "NOLS," as it is known, gives about 3,000 young people an education in how to live and work in the outdoors.

That leads to a question: Why would a 20-something give up iPods, alcohol, a soft bed — all the things that young people supposedly hold dear — and sleep on the ground for 2 1/2 months?

Each of the 11 students on this wilderness course has a different reason. Josh Sherman, a music student from Nelson, British Columbia, says he wants to prepare for an uncertain future.

Sherman is tall, frizzy-haired, and one of the more spiritually inclined members of this group. Many are at turning points in their lives, trying to decide what to do. Others want to test themselves in the outdoors, before they sign on to a life of work.

Rick Bieterman, a high school teacher from the Chicago area, says he came because he wants to bring something back to his students at Hinsdale South high.

"Kids really don't get out and do a lot of this stuff. We're sort of trapped in suburbia, where video games have become the norm. Not many people even get out to the forest preserves in our area."

Bieterman parted with $10,000 of his own money in the hopes of bringing awareness of the outdoors to his suburban school.

The 11 students have had plenty of surprises since they got off the bus in Wyoming's Absaroka Range in early June. They were hit by two weeks of unexpected snow. Now that they're entering Lodore Canyon on the Green River in western Colorado, they face a new danger.

Sherman, the leader of the day, tells the flotilla of rafts and kayaks to stop and scout the first section of rapids. The river is higher than usual — it will easily flip rafts or propel a kayak into a rock.

"We have a lot of food onboard," Sherman says as he looks at the massive raft he's in charge of.

"And if we lost it, it would be a disaster, because I love to eat."

Sherman will steer an ungainly oar raft loaded with a ton of gear. In a wilderness version of a thesis defense, students must justify their path down the river to their instructors.

In the middle of the channel is a warning sign: a red boat that wrecked weeks ago. Instructor Amy Christeson turns this into an object lesson.

"The guy who was rowing the dory, we asked him what happened, and he said, 'I've done this a million times, I just wasn't paying attention for this rapid,' " Christeson tells the group. "So what trap is that? Complacency. So remember, pay attention, pay attention."

But even those who pay attention can get wet, or worse. One boat suddenly turns turtle. Bieterman, the teacher from Chicago, hangs upside down, then emerges from his kayak. He leans against a rock, clearly in great pain.

"I just got what we call 'instant feedback,' " he says, still up to his knees in river water and clearly not thrilled to have someone capturing this moment on tape.

"I hit a rock on my left knee." Asked if he would be able to continue, Bieterman answers, "Oh, absolutely! Yeah! You don't need your knees in kayaking, right?"

Working Together: All Day

The next morning, student Mark Wadsworth from New Hampshire is on kitchen duty. "We're making breakfast burritos, and we're cooking bacon for BLTs for lunch," he says.

The work starts at sunup, and ends at 10 p.m. many days, with little personal time. Most chores are done in teams, which leads either to teamwork or bickering.

After nearly 70 days of sharing tents, food and body odors, students are getting on each others' nerves.

The course leader, Frank Preston, warns them: "More of the communication I saw this morning was kind of little groups of people talking about other groups of people, or why they were mad at so-and-so."

"I don't think that's healthy, and I definitely know it's not safe if we carry that onto the river."

Getting Grades On The Water

Working well with others isn't just a key to safety. Students can take this course for college credit. Teamwork and leadership affect students' grades.

As a teacher, Bieterman is used to giving out grades. But on the last evening of the course, he gets his NOLS evaluation. Instructor Larry Berger sits down with Bieterman after dinner.

Bieterman gets a B-plus on his kayaking skills. Berger says he needs a little more experience.

But when it comes to leadership, the real point of this course, Bieterman scores high. Here, he has been a star — he's been giving his fellow students minicourses in astronomy and geology as they move through the canyon.

Still, many students have struggled with their roles.

After he led the group for a day, Sherman confessed, "What I learned is that I've got to change from my sort of passive, hippy-dude leadership style to a more full-on confrontational style.

"And I tried a little bit of that out today, and it felt really good."

Sherman says that he thought the course would be a meditative experience, just man and nature. Instead, it has turned out to be an intensely social experience.

As difficult as it has been for this group to bond, it will be even more painful to de-bond. Many are openly tearful at the prospect of leaving the group.

For the instructors, this is just another turn of the wheel. Christeson has been down this river about 40 times. She is only 25.

"I will finish this course at noon, and by 8:30 of the next day, I need to be at the put-in for the lower Salmon River to be with my boyfriend to do a trip there."

That means 12 hours of driving up to Idaho. As for her permanent address, Christeson says that her car is pretty much the only permanent home she has these days — that and her kayak.

Only one of the 11 students actually plans to become an outdoor guide. But many say that they are rethinking their career choices. One plans to leave the business world, and become a teacher.