Accessibility links
Strange Bedfellows Behind Anti-Obama 'Turban' Ad Who was behind the inflammatory ad that showed Obama wearing a turban? The answer could be the start of a joke: a hypnotherapist, an apolitical wedding videographer, and a felon now on the run. And they still haven't paid for the ad. 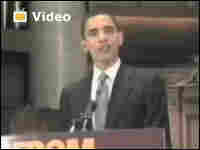 Will Evans is a reporter with the Center for Investigative Reporting. He writes for the Secret Money Project, a joint effort of CIR and NPR.

When Barack Obama explained his decision to opt out of public financing for the general election, he said he needed to defend against attacks by stealth conservative groups.

He pointed to one ad in particular, which showed an edited clip of him: "We are no longer a Christian nation ... We are also a Muslim nation," spliced with a photo of Obama wearing a turban.

"It took a speech that I had made, extolling faith, and made it seem as if I had said that America was a Muslim nation," Obama told reporters on June 20.

The ad, the first truly inflammatory spot to air on television this year, was produced by a shadowy group called the Coalition Against Anti-Christian Rhetoric.

Though it only aired once — just before the South Dakota primary — it created a hubbub by linking Obama to Islam. Yet few clues helped answer the question of who was behind the coalition.

It turns out the ad was the product of a hypnotherapist who later appeared in a pro-Clinton demonstration at the Denver convention, an apolitical wedding videographer, and a felon who is now on the run.

Their saga highlights the outsize influence that a hodgepodge collection of political amateurs can have in a national election — in this case, by accident.

Cristi Adkins says she was a gung-ho Clinton activist when some friends, an informal group of Christians from the South, asked her for help in responding to an Obama speech that offended them.

They had come across a 2006 speech in which Obama, addressing issues of faith, said it would be problematic to base public policy on Christianity, because parts of the Bible seem to support slavery and "stoning your child if he strays from the faith."

Adkins, who was also bothered by the speech, says she helped her friends organize and come up with a name — the Coalition Against Anti-Christian Rhetoric. She set up a Web site for them. And she helped produce the ad, using her husband's firm, Washington-based Allen Media Strategies, to place it on TV in South Dakota in time for the Democratic primary there.

The ad used an edited clip of the speech in which Obama actually says, "Whatever we once were, we are no longer a Christian nation — at least not just. We are also a Jewish nation, a Muslim nation, and a Buddhist nation and a Hindu nation, and a nation of nonbelievers." Other parts of the speech, where Obama discusses his own Christian faith, have been used in radio ads supporting him.

Adkins says the group itself didn't support or oppose a specific candidate — the members just wanted to take Obama to task for comments they felt denigrated Christianity. Adkins, who says she's an independent who voted for Democrat John Kerry in 2004, has much stronger feelings about Obama.

"I truly fear an Obama presidency. This guy's so dangerous, who needs al-Qaida?" she told me.

Adkins is a hypnotherapist and nurse who has a fat loss program and wellness center in Reston, Va. She has become a John McCain supporter and formed a new group, Clintons 4 McCain. She's been on Fox News and says she met with McCain in June, along with other Clinton supporters campaigning against Obama.

Adkins says she met Mike Donovan through her pro-Clinton organizing. As far as she knew, she says, he was another ardent Clinton activist. They even protested together at a rally, she says.

Donovan, now 31, told her he could raise money for the ad, according to Adkins. She recalls him saying he was a minister and could handle press.

Here's what Adkins says she didn't know: In 2000, Donovan was arrested for felony grand larceny and forgery, convicted and sentenced to eight months in jail, according to Virginia court records. In 2005, he was again arrested for grand larceny; the charge was reduced to a misdemeanor, and he was convicted. He now has an outstanding arrest warrant on felony charges of issuing bad checks and defrauding a Holiday Inn, according to a police spokesperson from Chesterfield County, Va. His photo appears on that county's "Most Wanted" Web site.

All of which goes to explain why Adkins would later say, "He is a shenanigan. ... It was my fault [for trusting him], so I will pay for it."

The person Adkins has to pay is Nick Thomas, who produced the attack ad.

Thomas runs Video Artistry, a Charlotte, N.C., company that shoots weddings and corporate events. He works with his brother, who goes by the stage name Scott Miles and played the brother of Jake Gyllenhaal's character in the 1999 movie October Sky. Adkins' husband had done work promoting Miles' film career.

Thomas says he and his brother had never produced a political ad when Adkins came to them. He says Adkins originally wanted to depict Obama with devil horns juxtaposed with images of Hitler. The brothers declined.

"I certainly didn't want to completely slander somebody — especially a guy that might be the next president. Then I get audited every year or something," Thomas said when we spoke.

Adkins acknowledges she wanted to show the disturbing similarities she saw between audience reactions to Obama and Hitler. As for the horns, the hypnotherapist says, "I might have said, 'Can you put a subliminal shadow in?' I don't know that I said put devil horns."

She says she was just brainstorming — "throwing noodles against the wall as to what could be done." In any case, at that point the coalition didn't have any money to produce an ad.

And that's where Donovan, the felon, stepped in.

Adkins and Thomas say that Donovan crafted the final script for the ad. Adkins' husband, radio personality and media consultant Burke Allen, did the voiceover, according to the videographer.

Donovan promised payment ... and then disappeared. (Donovan did not answer calls, e-mails or an attempt to contact him through MySpace.)

Which raises this question: If it was never paid for, how did this incendiary ad ever run on television?

The answer: Someone goofed.

Allen Media Strategies placed the ad to run on June 2, the day before the South Dakota Democratic primary, on a CBS affiliate in Sioux Falls. But when KELO-TV didn't receive any payment, it pulled the ad. And on June 2, Allen Media canceled the buy.

So it came as a surprise to everyone when, just after the 10 o'clock news that night, the ad went on the air. A station staffer made a mistake, the station president explained to me later.

Adkins says the coalition didn't end up liking the ad — which they thought too extreme. But, she said, "An ad that was never paid for got more media than they could ever hope for."

Who is this "they" Adkins refers to? She says she is protecting coalition members' identities for privacy reasons. But Thomas, the videographer, says he doesn't believe there ever was a coalition aside from Adkins.

Tracking down Donovan, in order to get paid, became an obsession for Thomas. He recites Donovan's addresses off the top of his head. He thinks he has traced Donovan to a possible relative who set up other anti-Obama Web sites and plays in a heavy metal band.

In Donovan's absence, Adkins has agreed to pay Thomas for his work. Then, she says, Clintons 4 McCain will own the ad and might use some form of it to blast Obama again.

In the meantime, Adkins showed up outside the Democratic National Convention in Denver on Monday, holding her Clintons 4 McCain banner amid a crowd of chanting Obama fans. Never camera-shy, she launched into a verbal bout with MSNBC's Chris Matthews over Obama's religion, at one point mockingly telling Matthews, "Maybe you can't hear — should we clean your ears out?"

Thomas, the videographer, doesn't have Adkins' stomach for political sparring: "I don't care to do any more political-type stuff."