Accessibility links
The McEnroe Rule: Less Punditry Is More Sportscaster John McEnroe, who as a tennis champ was known for his temper tantrums, has declared that in covering a great match, sometimes the key is to withhold comment till things play out. If only his brethren in the cable news world followed suit more often in covering politics. 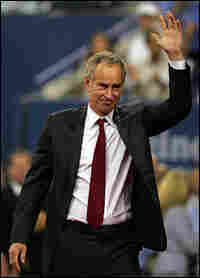 John McEnroe is a commentator at the U.S. Open this week. Under the McEnroe Rule, less is more — but that's not always true for America's pundits. Matthew Stockman/Getty Images hide caption 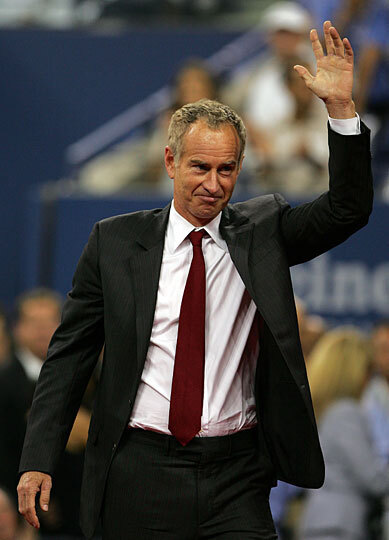 John McEnroe is a commentator at the U.S. Open this week. Under the McEnroe Rule, less is more — but that's not always true for America's pundits.

The New York Times published a profile on Sunday of the — let's be kind — the excitable former tennis champion John McEnroe. He's a broadcaster now, and the piece included this nugget:

McEnroe's belief as a broadcaster is that "when it's a great match you pull back" and say less, and only as that competition ended did the full McEnroe exuberance emerge as he pronounced it "one of the all-time matches that I've seen here."

Pretty insightful for a guy known for charging umpires' chairs as much as the net. If only the cable news talkers paid more attention to their sports brethren — and reined themselves in every now and then.

Yet when something noteworthy actually happened at the Democratic National Convention on Wednesday evening, the jaded pros briefly — briefly — pulled back and let it speak for itself. That moment was a formality, the structure of which had spawned much bickering, but a formality nonetheless. And when Barack Obama was finally nominated as the presidential candidate, he made history.

Honoring — Or Dishonoring — The McEnroe Rule

I was watching CNN honor the McEnroe Rule, as it let Democrats in Denver celebrate for quite a bit, without any commentary, with music playing and banners waving. Cameras lingered on some black delegates who were weeping. CNN commentator and Democratic superdelegate Donna Brazile — her dual loyalties merit scrutiny of their own — danced a bit on the cable network's platform, as anchor Anderson Cooper looked on a bit sheepishly.

Journalists on other networks stepped back to give voice to the moment, such as former NBC Nightly News anchor Tom Brokaw.

"It really is a commentary — however it turns out, however you feel about his candidacy — about America finally beginning to come to grips with the complexity of the racial issues that have beleaguered us for so long," Brokaw told viewers on MSNBC. "It is a huge step. A generational step."

Same over on Fox News Channel.

"I never thought in my lifetime that a major party would nominate an African-American," said Fox's Chris Wallace, who has also covered conventions for NBC and ABC. "This is a very special moment."

A sense of perspective emerged. But not to worry — right after former President Clinton's politically masterful speech Wednesday night, Fox News analyst and former Bush White House political strategist Karl Rove could be found bickering with Alan Colmes over whether Clinton was right to claim some credit for fighting HIV/AIDS in Africa.

At that point, I turned off the tube. Sometimes it pays to talk to people just a bit outside the bubble for perspective on what the heck is happening inside it.

Instead, I called on three of the nation's premier investigative writers who have pierced the secrecy of the Bush administration.

The reporting of the journalists Seymour Hersh, Jane Mayer and Ron Suskind — none of whom are part of the gaggle of daily political reporters — has led to separate but profound exposes involving the war on terrorism and the war in Iraq. In so doing, they have come under some fire from conservatives and especially the White House.

I reached Hersh on vacation in Massachusetts. He said TV pundits squander far too much attention on the rhetoric of the candidates. "If you remember, one of the elegant notions of the Bush campaign was, you don't need to respond to every crisis by intervening abroad."

But Hersh doesn't think either candidate has shown much willingness to acknowledge publicly how difficult it will be for the U.S. to extricate itself from Iraq, no matter how much a new president wants to. "That whole issue is glossed over," Hersh says.

Ron Suskind fretted over what he sees as the twin cults of message and secrecy, which, he said, "chokes off the informed question and often even informed debate." Suskind added, "The goal of many of the [political] handlers of this era is to make consent as uninformed as possible."

So how does a voter get beyond that?

Jane Mayer argued for listening for what is not said. In 2004, she noted, CBS's 60 Minutes and Hersh (in The New Yorker) revealed the Abu Ghraib scandal just weeks before the Democratic convention. Yet Democratic nominee John Kerry did not turn that pattern of prisoner abuse into an issue.

"The Democratic silence spoke volumes," Mayer wrote in an e-mail. But, she said, it wasn't noted. This time around, she said, the pundits are harping on divisions that she says are relatively mild by the standards of GOP schisms in 1976 and Democratic divides in 1980.

And how does a journalist go beyond that?

"My advice?" Mayer wrote. "Seek out the un-telegenic correspondents — the crustier they are the more likely they are to know the score."

At that point, I could almost hear a cheer rise up from the swollen ranks of the Crusty Laid-off Newspaper Guild, Local 99.

So why bother paying attention to conventions if it's so meaningless?

"Of course you watch, and I probably read the text too," said Hersh, perhaps the most cynical of all. "This week and next — you get a sense of who [the candidates] are. It's an important moment. They set the tone and tenor of the rest of the campaign. I just sit and watch as somebody who's an American citizen."

It's a little bit like the John McEnroe rule, sitting back and absorbing the game when it's being played at the highest level.