Accessibility links
A Tribute To Horace Silver Horace Silver is a piano-playing, pencil-packing papa whose songs showcase a family of jazz characters such as "Sister Sadie" and "Senor Blues." His music filled Dee Dee Bridgewater's album Love and Peace: A Tribute to Horace Silver. This concert in his honor comes from the Discoveries at Walt Disney Concert Hall series in Los Angeles. 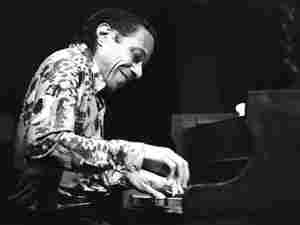 When bassist Christian McBride, the Creative Chair for Jazz at the Los Angeles Philharmonic, asked Dee Dee Bridgewater to participate in a tribute to Horace Silver at Walt Disney Concert Hall, she jumped at the chance. Silver was there for her, supplying words and music and support in the studio when she made her 1995 CD Love and Peace, a collection of his songs, which has become a fan favorite.

Music comes to Silver from what he calls his "inner source of inspiration." He likens it to working with an unseen, unknown collaborator, and he says that the main thing is giving music to the world and bringing joy to the people.

Silver's own world began in 1928 in Norwalk, Conn., where his mother toiled as a domestic until her death when Silver was just 9. His father — for whom he wrote his best-known composition, "Song for My Father" — worked at a local tire factory.

In the early 1950s, Silver cut his first sides for the Blue Note record label. Art Blakey was the drummer. Blakey and Silver formed the Jazz Messengers, but Silver left early on to organize his own quintet playing hard bop, the style in which he composed. He stayed with the Blue Note label for 25 years.

Once established as a bandleader, Silver kept an ear open for young talent. For the many he hired, it was their first important job. At various times, there were Randy and Michael Brecker from Philadelphia, trumpeter Woody Shaw from Newark, and a saxophonist from Ohio named Joe Henderson.

We open with Silver trumpet veteran Tom Harrell and his frequent saxophone sidekick, Joe Lovano. Randy Brecker, George Coleman, Bennie Maupin and Charles Tolliver will be along shortly with singer Andy Bey and finally our own Dee Dee Bridgewater.

This "LA Phil Presents" concert recording is made possible through the support of the county of Los Angeles.